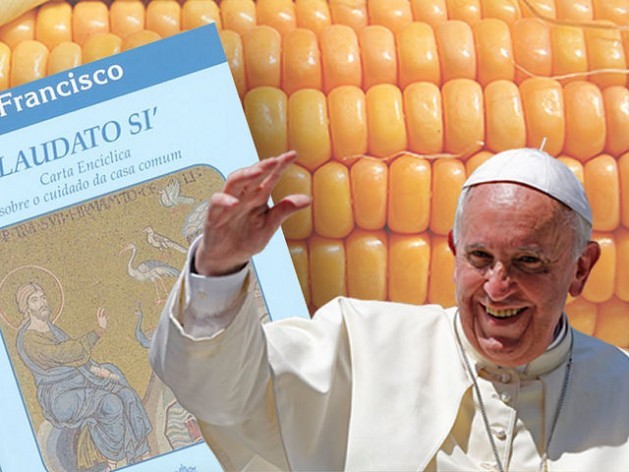 There is no papal bull on transgenic crops in Laudato Si, the second encyclical of Pope Francis, “on the care of our common home” – planet earth. Credit: Norberto Miguel/IPS

MEXICO CITY, Aug 11 2015 (IPS) - A few centuries ago, the biotechnology industry would have been able to buy a papal bull to expiate its sins and grant it redemption. But in his encyclical on the environment, “Laudato Si”, Pope Francis condemns genetically modified organisms (GMOs) without leaving room for a pardon.

In his second encyclical since he became pope on Mar. 13, 2013 – but the first that is entirely his work – Jorge Mario Bergoglio criticises the social, economic and agricultural impacts of GMOs and calls for a broad scientific debate.

Laudato Si – “Praise be to you, my Lord” in medieval Italian – takes its title from Saint Francis of Assisi’s 13th-century Canticle of the Sun, one of whose verses is: “Be praised, my Lord, through our sister Mother Earth, who feeds us and rules us, and produces various fruits with colored flowers and herbs.”

It is the first encyclical in history dedicated to the environment and reflecting on “our common home” – planet earth.

“In many places, following the introduction of these crops, productive land is concentrated in the hands of a few owners due to ‘the progressive disappearance of small producers, who, as a consequence of the loss of the exploited lands, are obliged to withdraw from direct production’.” – Laudato Si

The encyclical, which was published Jun. 18, acknowledges that “no conclusive proof exists that GM cereals may be harmful to human beings.” But it stresses that “there remain a number of significant difficulties which should not be underestimated.”

“In many places, following the introduction of these crops, productive land is concentrated in the hands of a few owners due to ‘the progressive disappearance of small producers, who, as a consequence of the loss of the exploited lands, are obliged to withdraw from direct production’,” it adds.

As a result, says the first Latin American pope, farmers are driven to become temporary labourers, many rural workers end up in urban slums, ecosystems are destroyed, and “oligopolies” expand in the production of cereals and inputs needed for their cultivation.

Francis calls for “A broad, responsible scientific and social debate…one capable of considering all the available information and of calling things by their name” because “It sometimes happens that complete information is not put on the table; a selection is made on the basis of particular interests, be they politico-economic or ideological.”

Such a debate on GMOs is missing, and the biotech industry has refused to open up its databases to verify whether or not transgenic crops are innocuous.

According to the encyclical, “Discussions are needed in which all those directly or indirectly affected (farmers, consumers, civil authorities, scientists, seed producers, people living near fumigated fields, and others) can make known their problems and concerns, and have access to adequate and reliable information in order to make decisions for the common good, present and future.”

Miguel Concha, a Catholic priest who heads the Fray Francisco de Vitoria Human Rights Centre in Mexico, said this country “is already a reference point in the fight for the right to a healthy environment, due to the determined efforts of social organisations. This encyclical reinforces our collective demand,” he told Tierramérica.

The priest said the encyclical warns of the social, economic, legal and ethical implications of transgenic crops, just as environmentalists in Mexico have done for years. 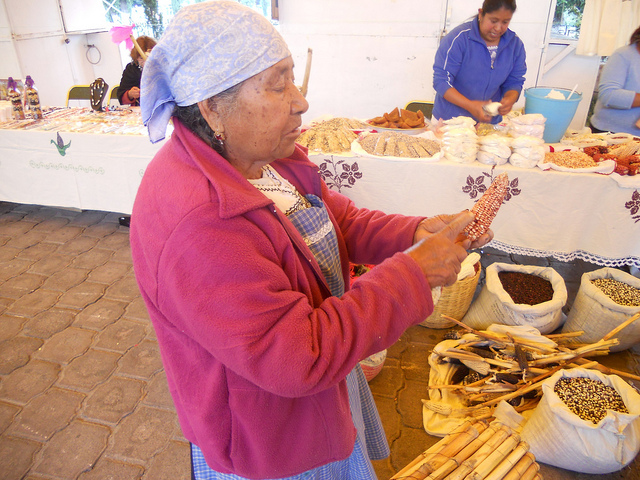 In a local market in Mexico, María Solís shows the different colours of native maize that she grows. Native crops are threatened by attempts to introduce large-scale commercial planting of GM maize in the country. Credit: Emilio Godoy/IPS

The document holds special importance for nations like Mexico, which have been the scene of intense battles over transgenic crops – in this country mainly maize, which has special cultural significance here, besides being the basis of the local diet.

That is also true for Guatemala, El Salvador, Honduras, Nicaragua and Costa Rica, which together with southern Mexico form Mesoamérica, the seat of the ancient Maya civilisation.

The pope is familiar with the impact of transgenic crops, because according to experts his home country, Argentina, is the Latin American nation where GMOs have done the most to alter traditional agriculture.

Soy – 98 percent of which is transgenic – is Argentina’s leading crop, covering 31 million hectares, up from just 4.8 million hectares in 1990, according to the soy industry association, ACSOJA.

The monoculture crop has displaced local producers, fuelled the concentration of land, and created “a vicious circle that is highly dangerous for the sustainability of our production systems,” Argentine agronomist Carlos Toledo told Tierramérica.

Just 10 countries account for nearly all production of GMOs: the United States, Brazil, Argentina, Canada, India, China, Paraguay, South Africa, Pakistan and Uruguay, in that order. Most of the production goes to the animal feed industry, but Mexico wants GM maize to be used for human consumption.

In July 2013, 53 individuals and 20 civil society organisations mounted a collective legal challenge against applications to commercially plant transgenic maize, and in September of that year a federal judge granted a precautionary ban on such authorisations.

Since March 2014, organisations of beekeepers and indigenous communities have won two further provisional protection orders against commercial transgenic soybean crops in the southeastern states of Campeche and Yucatán.

On Apr. 30, 2014, eight scientists from six countries sent an open letter to Pope Francis about the negative environmental, economic, agricultural, cultural and social impacts of GM seeds, especially in Mexico.

In their letter, the experts stated: “…we believe that it would be of momentous importance and great value to all if Your Holiness were to express yourself critically on GM crops and in support of peasant farming. This support would go a long way toward saving peoples and the planet from the threat posed by the control of life wielded by companies that monopolise seeds, which are the key to the entire food web…”

Laudato Si indicates that the pope did listen to their plea.

“The encyclical is very encouraging, because it has expressed an ecological position,” Argelia Arriaga, a professor at the University Centre for Disaster Prevention of the Autonomous University of Puebla, told Tierramérica. “It touches sensitive fibers; the situation is terrible and merits papal intervention. This gives us moral support to continue the struggle.”

But legal action has failed to curb the biotech industry’s ambitions in Mexico.

In 2014, the National Service for Agri-Food Health, Safety and Quality (SENASICA) received four applications from the biotech industry and public research centres for experimental planting of maize on nearly 10 hectares of land.

In addition, there were 30 requests for pilot projects involving experimental and commercial planting of GM cotton on a total of 1.18 million hectares – as well as one application for beans, five for wheat, three for lemons and one for soy – all experimental.

SENASICA is also processing five biotech industry requests for planting more than 200,000 hectares of GM cotton and alfalfa for commercial and experimental purposes.

“This is an economic and development model that ignores food production,” said Concha, the priest who heads the Fray Francisco de Vitoria Human Rights Centre.

The participants in the collective lawsuit against GMOs, having successfully gotten federal courts to throw out 22 stays brought by the government and companies against the legal decision to temporarily suspend permits for planting, are now getting ready for a trial that will decide the future of transgenic crops in the country.

Arriaga noted that the focus of the encyclical goes beyond GM crops, and extends to other environmental struggles. “For people in local communities, the pope’s message is important, because it tells them they have to take care of nature and natural resources. It helps raise awareness,” the professor said.