NEW YORK, Oct 20 2015 (IPS) - The demographic revolutions the world is experiencing are profound and far-reaching, affecting virtually every aspect of human society. Whether in politics, business, international relations, environmental affairs or even personal matters, understanding the fundamental demographic changes underway and anticipating their juggernaut consequences can contribute considerably to the setting of meaningful goals, designing effective strategies and achieving genuine progress.

Most observers would probably not go as far as some who claim “demography is destiny.” Many, however, would likely concede that demography is way ahead of anything else in second place regarding the destiny of human populations.

Among the key demographic revolutions underway perhaps first and foremost is the unprecedented growth of world population. The 20th century saw the beginning of rapid growth with the world’s population increasing nearly four-fold during the past century, from 1.6 billion in 1900 to 6.1 billion in 2000.

World population, now at 7.3 billion, is projected to reach 9.7 billion by mid-century and 11.2 billion by the century’s close, according to the UN medium variant projection which assumes declines in high fertility and slight increases in low fertility. It is possible, however, that world population in the future could be larger or smaller than that projection (Table 1).

Nearly all of world population growth takes place in less developed regions. India and China alone account for close to one-third of the world’s annual births, 19 per cent and 12 per cent, respectively. The increase in India’s population is so rapid that it achieves in 10 days the same demographic growth as Europe over an entire year.

Differential rates of demographic growth are contributing to a New International Population Order. Whereas six of the world’s 10 largest populations in 1950 were more developed countries, today the number is two – the United States and the Russian Federation – and by 2035 the Russian Federation is projected to be displaced by Ethiopia (Figure 1). 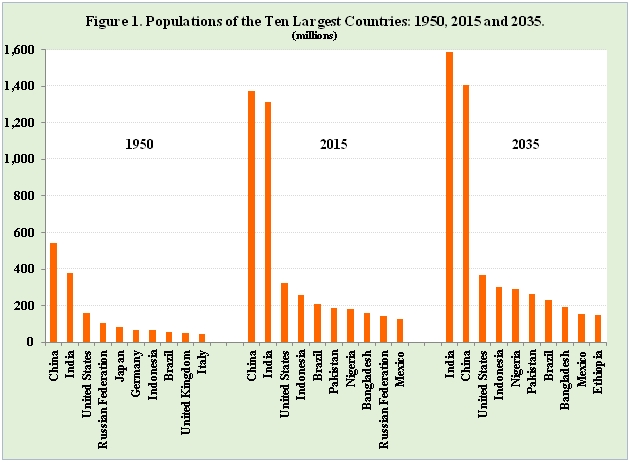 Europe’s population, which was double Africa’s in 1965, is expected to be half the size of Africa’s population by 2025. Other noteworthy population changes include India surpassing China in 2022, the population of the Philippines outnumbering Japan in 2029, the United Kingdom exceeding Germany in 2049 and Nigeria overtaking the United States as the third most populous country in 2049.

In 2007, for the first time in human history, the majority of the world became urban dwellers. By mid-century the growing urban population is expected to account for two-thirds of the world’s population, which is the reverse of the world urban-rural distribution in mid-20th century. Most of the world’s projected population growth over the coming decades will be taking place in urban areas.

Another demographic revolution during the 20th century – perhaps humanity’s greatest achievement – is the decline in mortality. Mortality rates across all age groups, especially infants and children, fell remarkably resulting in dramatic increases in life expectancies.

Whereas global life expectancy at birth in 1950 was 47 years, it is projected to be 78 years by mid-century. Increased human longevity is also expected to continue or even accelerate with the current number of centenarians projected to increase 60-fold by 2100.

A further decisive demographic development during the 20th century is the remarkable decline in fertility levels in most regions of the world. Over the past 50 years the average global fertility rate declined from 5 to 2.5 births per woman.

Africa remains the only major region with relatively limited fertility declines. Consequently, the populations of 28 African countries are expected to more than double by 2050 and 10 of them are projected to increase by at least by five-fold by 2100.

In contrast, 83 countries – accounting for nearly half of the world’s current population – have fertility rates below the replacement level. As a result of those low fertility rates, the populations of 48 countries, many in Europe, are projected to be smaller by 2050.

Average ages of population, for example, have increased in most countries, with the highest now at 46 years in Italy, Germany and Japan. Among the developed countries the proportion of elderly aged 65 years and older surpassed for the first time the number of children aged 0 to 14 in 2015 and that noteworthy transition is expected among the developing countries in 2075.

International migration will continue to impact population growth, age structure and ethnic composition, especially among the major receiving countries where it has become the dominant force of demographic growth. This in turn will result in significant social, economic, political and cultural consequences not only for receiving societies but also the sending and transit countries.

Those migratory flows are expected to include mounting numbers of refugees, asylum seekers and others displaced by conflict, political upheaval and environmental degradation in many less developed countries.

The more developed regions are expected to continue being net receivers of international migrants, with an average gain of at least two million people per year over the coming decades. The outflow of the highly skilled and educated from the less developed countries, particularly in Africa and Asia, is likely to further challenge and undercut developmental efforts in many of those countries.

The revolutionary demographic changes that the world is experiencing are impacting virtually every aspect of human life. Ignoring those weighty consequences and avoiding the needed adjustments to the changing demographic landscapes will significantly impact societal wellbeing. On the other hand, fully acknowledging the revolutionary demographic changes underway and seriously preparing for the anticipated challenges will contribute significantly to improving human existence on the planet.