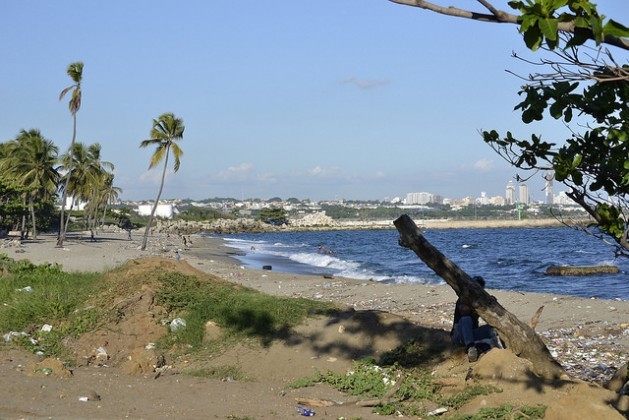 A view of Gringo beach and, in the background, the city of Bajos de Haina, the Dominican Republic’s main industrial hub and port, and the third-most polluted city in the world. Credit: Dionny Matos/IPS

BAJOS DE HAINA, Dominican Republic , Dec 15 2015 (IPS) - Rubbish covers the beaches and clutters the rivers, the garbage dump is not properly managed, and more than 100 factories spew toxic fumes into the air in the city of Bajos de Haina, a major industrial hub and port city in the Dominican Republic.

“We’ve only made it into the news as one of the world’s most polluted places,” lamented Adriana Vallejo, a schoolteacher who talked to IPS in the Centro Educativo Manuel Felix Peña, a school that teaches the arts in this city 80 km to the south of Santo Domingo.

Vallejo was referring to the list of the 10 most polluted places on earth drawn up periodically by the New York-based Blacksmith Institute (which has changed its name to Pure Earth).

The Institute’s latest report, from 2013, listed Bajos de Haina in third place, after Dzerzhinsk, Russia, and Chernobyl, Ukraine, which suffered one of the worst environmental disasters in history, caused by the catastrophic nuclear accident in 1986.

“Those up above are not paying attention to the environmental problem,” said Vallejo, referring to the ruling classes and the authorities. “We, from here down below, can do practically nothing.”

According to the “Map of Poverty in the Dominican Republic 2014”, 33 percent of households in this city of 159,000 people are poor.

“Private companies contribute a little to improving things, but only with small gestures, such as facilities at the school that were refurbished by the oil refinery (the only one in this Caribbean island nation). We haven’t seen a real desire for Haina to change,” said the teacher, who has lived here for 25 years.

“When the situation gets out of hand, we hold protest marches,” she said. “The people have had to take to the streets to fight serious problems like burning in the garbage dump, which enveloped Haina in a curtain of smoke.”

The manufacturing, chemical products, pharmaceutical, metallurgical and power plants and the oil refinery emit every a combined total of 9.8 tons of formaldehyde, 1.2 tons of lead, 416 tons of ammonium, and 18.5 tons of sulfuric acid annually. 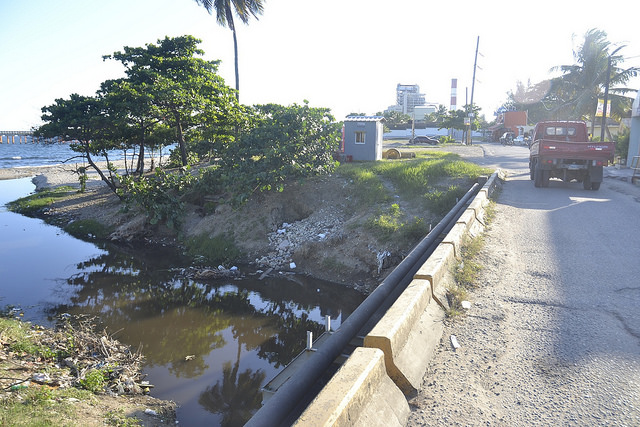 The mouth of the Ñagá River, whose waters have darkened as a result of industrial waste and which has become more narrow due to the loss of the mangroves lining the banks, in the Dominican Republic coastal city of Bajos de Haina. Credit: Dionny Matos/IPS

The city’s thermoelectric complex produces more than 50 percent of the electricity available for the economy and the country’s 9.3 million inhabitants.

In this city, 84 hazardous substances have been identified, 65 of which are major toxics.

Factories dump waste into the rivers and the sea. And noise pollution is another problem affecting human health.

Scientific studies warn that a majority of local residents suffer from ailments such as asthma, bronchitis, the flu and acute diarrhea.

In this city of 50 square km, the main environmental woes are air, water and noise pollution, problems caused by the open-air dump, and municipal solid waste scattered everywhere.

Where tons of garbage now cover a wide open area, there was a forest 30 years ago, “where I used to wander as a kid,” said high school math teacher Juan Ventura, who took IPS to the dump. “People who used to live around here back then are nostalgic and sad; we miss what was once a natural area that used to be known as El Naranjal.”

“The city’s garbage is brought here, with absolutely no kind of health policies. For decades, they even brought in part of the garbage from Santo Domingo. The only thing they did was burn it, and the entire local population had to breathe the nauseating smoke.

“It’s pathetic that the local authorities have no serious policy for recycling, and some local residents scavenge waste materials on their own, without any protective measures,” he said, pointing to around a dozen men and women sorting through bags of garbage for scraps of material, plastic and metal, to classify and sell them to recycling companies.

One of the women, her hands filthy from scavenging, told IPS that she is involved in this informal activity because of the money she can earn.

The woman, who is originally from neighbouring Haiti, said she makes between 22 and 44 dollars a day collecting plastic that she resells – a considerable sum in a country where the minimum monthly wage is 231 dollars.

The authorities say Haina is suffering from the legacy of years of nearly non-existent environmental legislation.

The neighbourhood Paraíso de Dios or God’s Paradise turned into a living hell during the 20 years that the Metaloxa car battery recycling smelter operated there with no environmental controls or oversight. Local residents in the area where the plant used to operate have extremely high blood lead levels.

For a decade the community put up a battle until Metaloxa was forced to pull out in 1999, when the Public Health Ministry finally took action.

But many locals suffered irreversible damage to their health.

Residents of this city complain that enforcement of the 2000 law on the environment and natural resources is lax.

“There is no respect for the environment,” Mackenzie Andújar, a 41-year-old plumber who lives in the area of Gringo beach, told IPS. “There is no control over factories here; they dump their toxic waste out of chimneys and into the water. The situation in Haina has only gotten worse in recent years.”

The Ñagá River, which flows into the sea at Gringo beach, is filthy and narrow as a result of garbage dumps and deforestation. Plastic bottles, cardboard, old clothes and other trash is strewn over the sand dunes, while children splash in the water. The view from the beach is the furnaces and smokestacks of the nearby factories.

“The locals are uncultured; when a dog or other animal dies, they throw the corpse into the river or on the beach, instead of burying it,” said Andújar.

The environmental crisis, the high population density, the poor living conditions and the lack of services infrastructure make this a conflict-ridden area, according to the 2011 study titled “a socioeconomic and environmental diagnosis on the management of solid household waste in the municipality of Haina”

“The environmental problems in our community are hard to deal with, but we also have social contamination caused by crime and young people’s lack of interest in studying,” said music student Juan Elías Andújar.

“In school they talk to us about ecological issues,” he told IPS. “We have a group called ‘Guardians of Nature’, to raise social awareness and carry out actions like clean-ups of beaches. Haina could change if each person were willing to make an effort.”