Climate Change and Poverty, a Deadly Cocktail for Dominicans 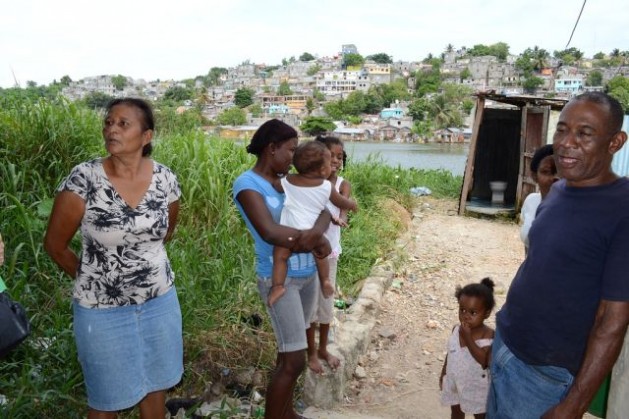 Josefa Moya: "Moving is not an option." Credit: Dionny Matos/IPS

SANTO DOMINGO, Jul 26 2012 (IPS) - “Nobody mourns the poor, you know.” That is the grim conclusion of a resident of La Ciénaga, one of the many poverty-stricken settlements clustered along the banks of the Ozama River in the Dominican capital, and which are at the mercy of the weather.

The man has nothing more to say, refusing to have his picture taken or give his name.

“I wish they’d take us out of here, find us a safer place,” his wife adds, looking out onto the Ozama River, which is almost at the threshold of the makeshift shelter they call home.

A few metres away, Josefa Moya is more forthcoming. “This whole area floods whenever it rains a lot and it takes at least three days for the water to drain from our houses. I live alone and clean houses for a living, so moving is not an option for me,” she tells IPS.

Her comments receive nods of approval from a group of women from the township who are standing around her with babies in their arms. They too have no other alternative.

José Sánchez leads IPS in an improvised tour through the maze of narrow streets where, he says, some 8,000 families live.

“When a cyclone hits or heavy rains come, the river swells, dragging all sorts of garbage with it. I think that’s why this neighbourhood floods so much,” Sánchez says.

According to him, in the last five years the situation has become increasingly worse. “Every time there’s a flood they say they’re going to relocate us, but, as you can see, we’re still here,” he says.

Independent sources estimate that some 400,000 people live on the banks of the two main rivers of Santo Domingo – the Ozama and the Isabela – where they are exposed to weather hazards that are expected to become more intense and devastating.

Interviewed by IPS, environment and natural resource minister Ernesto Reyna confirms that one of the “huge challenges” his country faces in its efforts to adapt to climate change has to do precisely with this impoverished sector of the population, which is highly vulnerable to cyclones, heavy rains and other extreme climate events.

Reyna says these families settle in the middle basins, where water levels are low during long periods of drought.

“They see it as a viable place to set up a house and even plant a small vegetable garden. They don’t think there will be any problems if they settle there,” he says.

“But then a storm comes, and it doesn’t even have to be a hurricane, just a spell of heavy rains, which combined with deforestation and our poor (basin) management, causes flash floods so devastating in force that they destroy everything in no time,” Reyna explains.

In 1998, Hurricane George left 235 people dead in the Dominican Republic and cost the country some 146 million dollars, according to official estimates. In October 2007, Tropical Storm Noel had caused 439 million in material losses (equivalent to 1.2 percent of that year’s gross domestic product) and claimed 87 lives, with another 42 people reported missing.

Recovering from these natural disasters is very costly, Reyna notes.

“Our great misfortune,” he says referring to the region, “is that just as we’re coming out of a difficult economic situation, a hurricane comes and wipes out all our savings. So we can never overcome the poverty the majority of our people live in.”

Data from the World Bank (WB) and the Inter-American Development Bank (IADB) indicate that 43 out of every 100 Dominicans were poor in 2004 and 16 out of 100 qualified as abject poor. According to reports from the United Nations, in the following six years these indicators dropped to 34 and 10.4 percent, respectively.

Projected climate change impacts for the Dominican Republic are not at all promising.

According to Reyna, this country of 9.5 million people, which shares the island of Hispaniola with Haiti, the poorest country of Latin America and the Caribbean, could lose about a fifth of its territory to rising sea levels.

“I’ve lived here for 17 years and I can tell you that in the last five years the rains have been getting more and more intense, and that has brought more floods. Everyone knows this is caused by climate change,” Eridania Rosario Marcelo, president of the La Barquita neighbourhood association, told IPS.

This Ozama River bank community, located in the district of Las Mina, has made repeated requests to have the river dredged to remove garbage and other obstructions that cause the river to overflow.

“We’ve asked and asked, but nobody listens. If they dredged this part of the river to get rid of all the garbage that the water drags down, the risk wouldn’t be as high,” she claims.

At the start of the hurricane season, which spans from June to November, local residents begin to take greater precautions, monitoring the Ozama to see if the water rises and gathering tarpaulin sheets to set up “a small house” in the high section of the bridge as an emergency shelter just in case.

Omar Ramírez, vice president of the National Council for Climate Change and Clean Development Mechanism, told IPS that “70 percent of the cities in the Dominican Republic are built on the banks of rivers or other waterways… These areas are covered by a proliferation of extremely poor urban settlements,” he admits.

In this sense, Ramírez stresses the importance of the “mandate” established under article 194 of the 2010 Constitution, which calls for land planning solutions that meet climate change adaptation needs.

The issue is also included in the strategic plan developed to face climate change.

“Land planning is a difficult and complex issue to address, but it is not impossible. Solutions can be achieved through social alliances,” Ramírez says.

The climate change body was created in September 2008 with the purpose of coordinating and synchronising state efforts aimed at mitigating and adapting to global environmental risks.