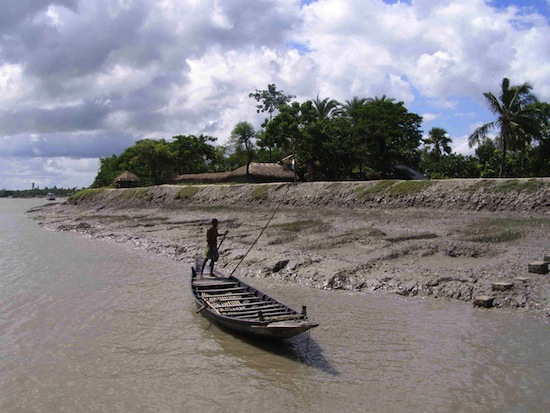 KOLKATA , Mar 25 2012 (IPS) - Sahara Bibi, a 47-year-old poor Muslim woman living on one of the climate- impacted islands of Eastern India’s fragile Sundarbans archipelago in West Bengal state, was forced to pull her two young sons out of school and send one of them to the Southern state of Kerala to earn a decent income.

A resident of Mousuni village in the Namkhana area of the Sundarbans, Sahara has lost her home twice in seven years owing to erosion caused by the rising sea level as a result of the severe impact of climate change.

Declared a World Heritage site by UNESCO and home to a highly unique ecology – including the world's largest mangrove gene pool and the endangered royal Bengal tiger – the Sundarbans (spread across a 9630 square kilometer-area in India and covering 16,370 square kilometres in Bangladesh) face a drastic threat from global warming and attendant climatic change.

Here, the sea level has been rising at a rate higher than the global average for years now, wreaking havoc on the archipelago’s population of roughly 4.37 million people, according to 2011 provisional data released by the Indian census department.

Furthermore, a new study by the Centre for Science and Environment (CSE), one of India’s leading environment pressure groups, in partnership with the Kolkata-based South Asian Forum for Environment (SAFE), has revealed a double whammy for the region’s people – not only loss of habitat from climate change but also a complete lack of climate-sensitive development planning.

According to "Living with Changing Climate: Impacts, vulnerability and adaptation challenges in Indian Sundarbans", inadequate development planning is forcing people in this fragile region to migrate to other parts of India in search of livelihoods, while the number of climate refugees in the area swells and vast swathes of agricultural land is either devoured by the encroaching sea or rendered unfit for cultivation.

When Sahara’s younger son Sahzahan went to the Southern Indian state of Kerala to work as a mason, she was shattered. But now her son earns 300 rupees (roughly six dollars) a day and persuades others from their village to join him as a migrant labourer. Since migration is dependent on networks and acquaintances, Kerala is quickly becoming a depot for scores of workers fleeing their ravaged home in search of minimum-wage jobs.

When the CSE quizzed Sahara about the efficacy of government schemes for alternative livelihood in her region, she said she had heard nothing about it.

Nor has she been provided with any information about the perils of climate change in the Sundarbans, despite being a climate refugee herself. All she knows is that the number of pre-seasonal cyclones has only increased in the Sundarbans, with the worst – Cyclone Aila – causing utter devastation and massive deaths in May 2009.

Unlike Sahara, Saikh Rustam (52), also hailing from the Namkhana area, is better informed about government schemes but is unable to avail himself of their benefits.

Rustam’s home has been devoured by the rising sea level thrice in just 12 years. The advancing sea robbed him of his livelihood as a farmer and he was forced to become a fisherman.

However, "during the monsoon, when the river is dangerous, there is no livelihood even as a fisherman," he told IPS.

"But I prefer not to get engaged in MGNREGS because the payment is made in a bank account. I did not have an account earlier, while even now one has to lose a day’s wage to go to the bank located far away," he said.

The Sundarbans is losing land rapidly and soil salinity is increasing fast, posing a dire threat to the future of agriculture in the region.

The Indian part of Sundarbans has been losing land at the alarming rate of 5.5 square kilometres per year over the past ten years.

In the same period, the frequency of cyclones increased by 26 percent, according to the CSE.

The joint CSE-SAFE research report also warned that one of the most biodiverse habitats in the world is getting pummeled not only by a changing climate, but also by the complete lack of development planning.

"With a growing population, there is a constant conflict between conservation and livelihood needs. The costs of conservation are globally dispersed but not locally enjoyed. With a growing subsistence economy, no global market for the produce from the region and little benefits from tourism, a majority of the population is forced to suffer grinding poverty," says lead researcher and author of the report, Aditya Ghosh.

CSE-SAFE researchers also report that broad development planning for the region has failed to envisage how people will continue living in the island with a sense of security and dignity.

"There is a piecemeal approach that can, at best, serve a short term agenda. Population pressure and diminishing returns from natural resources are at loggerheads (and) the sustainability of the island itself is threatened," Ghosh added.

The report goes on to claim that many families in the Sundarbans are now entirely dependent on remittances from migrant family members for all major household expenses.

According to Chandra Bhushan, head of CSE’s climate change programme, development planning in the Indian Sundarbans has never included the impacts of climate change impacts in its purview.

"This is quite evident in the way everything from electrification to land management is being done here. A decentralised distribution network for renewable energy has not been promoted," Bhushan lamented.

According to SAFE chairperson Dipayan Dey, the paradigm for sustainable development in the Sundarbans must shift from disaster-based hazard mitigation to community-based climate adaptive intervention.

"Before it is too late, (strong) political will to advocate community governance of natural resources must emerge," he stressed.