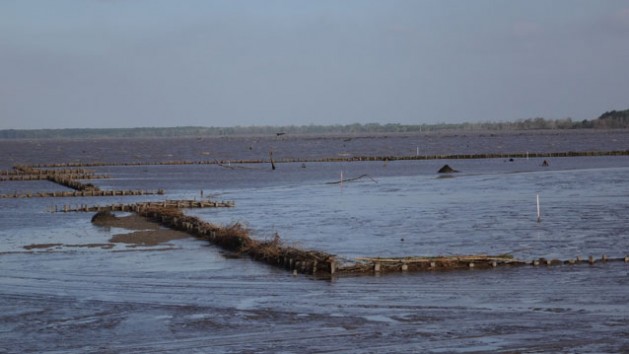 Suriname is aiming to reverse coastal erosion of mangroves countering destructive erosion along the country’s coastline with these permeable dams breaking the waves and trapping sediment and reclaiming land. Credit: Sieuwnath Naipal

PARIS, France, Dec 9 2015 (IPS) - Suriname’s coastline is eroding so quickly scientists predict the country’s maze of mangroves could disappear in just 30 years unless there is urgent action on climate change.

To counter this destructive erosion, Sieuwnath Naipal has been leading efforts to “mimic nature” by placing permeable dams along the coast to break the waves and trap sediment and reclaim land.

Once the land is back, mangroves can recolonize the area and help protect the coastline against further erosion.

“We have a coastline which is very flat, just like a pancake,” Naipal told IPS on the sidelines of the United Nations Climate Change Conference (COP21), where he has been presenting his project and urging international support.

“The capital (Paramaribo) is near to the coastline and it is nearly equal with the mean sea level. The protection actually is the mangroves and the mangroves are under attack with the rising of the sea level and also the intervention of humans.

“Over the last 10 years the coastline has retreated 600 metres at certain locations. It’s a rapid retreat of the coastline so we have to act now,” Naipal said.

But he said saving the Suriname coastline is an expensive venture, explaining that one kilometer of protection (building dykes and dams) costs about 6.5 million dollars.

The Suriname coastline is fed by silt washed down by the Amazon River.

“Changes in the Amazon have impacted the coasts. Annually you have millions of tonnes of sediments being transported in. So we can make use of that,” Naipal explained.

Suriname, situated on the northeast coast of South America, has about 100,000 acres of mangroves spreading over 386 kilometres. The width varies from three to eight kilometres and sometimes up to 14 kilometres.

“These mangroves have the function of trapping sediments. We know (that) where we have mangroves we have a lot of sediments trapped and where you don’t have the mangroves then you have lots of erosion,” Naipal said.

The country’s densely populated coastline is home to approximately 90 per cent of its 500,000 residents. Due to migration and an ever increasing population, people are moving towards the sea and mangroves are destroyed to make way for settlements.

The Russian-trained hydrology professor at the Anton de Kom University of Suriname is assisted by students from the university on the project.

“We get support from Conservation International Suriname. We got some seed money to show that it’s possible and the government is looking to take this over,” he said.

Mangrove forests provide protection and shelter against extreme weather events, such as storm winds and floods, as well as tsunamis. Mangrove forests are also rich in biodiversity providing a habitat for wide varieties of animal and plant species. They are dynamic areas, rich in food. Live and decaying mangrove leaves and roots provide nutrients that nourish plankton, algae, fish and shellfish. Many of the fish caught commercially in tropical regions reproduce and spend time in the mangroves as juveniles or adults. Mangroves are also home to many birds and mammals.

With living biomass typically ranging between 100-400 tonnes per hectare, and significant quantities of organic matter being stored in the sediment, mangroves rival the sequestration potential of rainforests.

“Mangroves bring a lot of tourism, benefits fishers which is a big income earner for Suriname, and CO2 conservation is three to five times more than tropical forests,” Naipal said.

“We see sea level rise impacting the coastal areas which are not protected properly. We don’t have the money to build high dykes and dams and so on,” he said.

“The water management, the inundation of salt water far more into the interior of Suriname will have impact on the agricultural capacity. So for us there are very real dangers. On top of that, almost 90 per cent of our population lives in the coastal areas which with one metre sea level rise, it would mean that we would have to move the capital and all of the urban areas into the hinterlands of Suriname. That will be an enormous cost.”

Ramdin said the government is also committed to doing it part to implement mitigation and adaptation measures.

“We have a very low level of deforestation, less than one per cent. We are involved in sustainable logging so we have protected our natural resources pretty good but that is not enough because the impact comes from outside,” he said.

“So the Government of Suriname is already preparing for adaptation policies and is committed to doing so. It was one of the key priorities President (Dési) Bouterse stated in his recent address to parliament. So there are very concrete issues about agriculture, arable land, about food security, about losing land, about the inundation of salt water and we need to take care of that.

“So for us climate change is a real issue and there is the political commitment but again it should not stop there. Political commitment is one thing, but it’s about putting that into action and that’s what we’re doing here,” he added.

Suriname is covered with vast and pristine rainforests and rivers. Their protection is a national priority. Thanks to those forests, Suriname absorbs more carbon than it produces from burning fossil fuels; and so it plays an important role in combating global warming.

“While many countries are striving towards becoming carbon neutral, our current development path has already made us carbon negative,” he said.