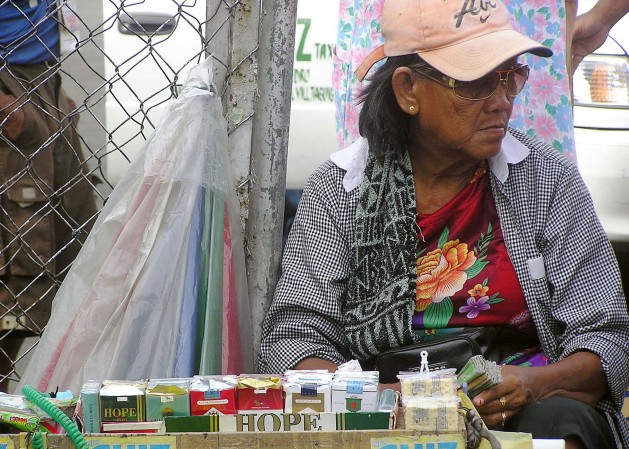 A cigarette vendor in Manila sells a pack of 20 sticks for less than a dollar. / Credit:Kara Santos/IPS

UNITED NATIONS, May 31 2016 (IPS) - This year for World No Tobacco Day on May 31 the World Health Organization has recommended that countries adopt plain packaging as a way to reduce tobacco use, however so far mostly only rich countries have been able to afford to implement the changes.

Around the world, a number of effective interventions are being used to reduce tobacco use, including taxation, age restrictions, smoke-free public spaces, marketing bans, and counter marketing, and “plain packaging” where Australia has led the way.

The plain packaging theme of this year’s World No Tobacco Day takes a page out of Australia’s successful legislation of 2011, the momentum from which is continuing – with the United Kingdom, France, Canada and New Zealand, all committing to plain packaging.

“We know that the pack is designed to be appealing, often targeted for a specific audience such as women or youth,” Nicole Hughes, who works in tobacco control research at the Nossal Institute for Global Health, told IPS. “Therefore, reducing the packs capacity to attract and be used as an advertising agent is incredibly important in combating tobacco consumption,” she added.

However while tobacco use has declined in many high-income countries – such as Australia, where tobacco use has halved since 1991 – smoking has persisted in poorer countries, where regulations also tend to be weaker.

According to the WHO poorer countries have almost twice as much tobacco advertising as richer ones, and the poorer the country, the more shops in that country are allowed to sell cigarettes.

“Half of the people who smoke will most likely suffer from a tobacco related illness, while the other half will die from them,” Edouard Tursan D’Espaignet, coordinator of the WHO’s Tobacco Free Initiative, told Inter Press Service.

“With the legal information available now from these cases, other countries can use this past experience to help when the tobacco industry tries to make claims against them,” Edouard Tursan D’Espaignet, WHO.

“This is a matter of a few people making millions of dollars off the deteriorating health and death of the people around the world,” D’Espaignet said.

The move towards plain packaging, which can also involve printing health warnings on cigarettes, is one way to help combat this problem, has not come without a fight from the tobacco industry.

Back in 1993, long before policies requiring plain packaging were researched or considered by governments, the tobacco industry set up a task force to find out what would happen if plain packaging was put in place, said D’Espaignet. They found that it would be detrimental to their profits because it significantly reduced the appeal of smoking. Armed with the knowledge of the repercussions from plain packaging, this industry embarked on tactics to prevent governments from legislating such strictures, including going to court.

Just this month, the high court in the U.K. rejected an appeal from tobacco companies against plain packaging. All 17 charges against the government were defeated but at the cost of millions of dollars spent on the legal battle and trials.

“With the legal information available now from these cases, other countries can use this past experience to help when the tobacco industry tries to make claims against them,” D’Espaignet emphasized.

“The fear that Big Tobacco has about plain packaging and its potential impacts is huge, and their scaremongering behavior demonstrates this clearly” said Hughes. “They are terrified that plain packaging works and want to do everything to prevent it.”

However, as these tobacco control policies are increasingly introduced and fought for by the governments of high-income countries, the tobacco industry, dominated by Philip Morris, British American Tobacco, Imperial, and Japan Tobacco International, have been shifting their target market to low to middle income countries.

About 80 percent of the world’s smokers live in low- and middle-income countries, and the World bank predicts that by the year 2030, these countries will experience 7 million tobacco-related deaths a year – 70 percent of the global total.

According to the WHO, 92 percent of the world’s population lives in countries where taxes are below the WHO recommended level. And sadly, although tobacco use continues to be the second leading cause of death worldwide, only $68 million of the $31.4 billion in development assistance for global health in 2011, went to tobacco control.

“We know that the poorer the country, the more unrestricted the tobacco industry’s marketing schemes are,” said D’Espaignet. Chris Bostic, deputy director of policy at Action for Smoking & Health, a Washington, D.C. based advocacy organization, sees the lawsuits by Big Tobacco as a good sign. His organization, he said, has been partnering with others to push for changes in trade agreements to prevent tobacco industry lawsuits. And not all tobacco measures are subject to trade jurisdiction, so governments can move forward confidently on most measures, he contended.

“In one way these lawsuits are a good sign. The tobacco industry is worried that Plain Packaging will seriously erode their sales. This is the whole point.” Bostic told IPS.

Hughes hoped the lawsuits would spread awareness, and the current global focus through WHO on the issue of packaging, would yield positive results. “At this stage more research and preparation is required given the legal and financial complexities associated with developing and defending such laws,” she said. “However, the publicity and discussion which will be associated with WHO focus on plain packaging will hopefully lead to opportunities for further research in the LMIC context.”

Poor nations like Uruguay, Togo, and Namibia have found it difficult to defeat multinational tobacco companies which have used trade and investment lawsuits to block or delay implementation of laws governing cigarette advertising and labeling. Problems of implementation are compounded by issues of governmental corruption, economic dependence on the tobacco industry, or the lack of resources to combats threats of litigation from Big Tobacco.

“The WHO’s push for plain packaging is equally relevant in LMICs, however for most LMICs it may take some time,” Hughes noted.

Research has shown that raising taxes on tobacco products has been very effective in reducing consumption, and subsequently, reducing healthcare costs.