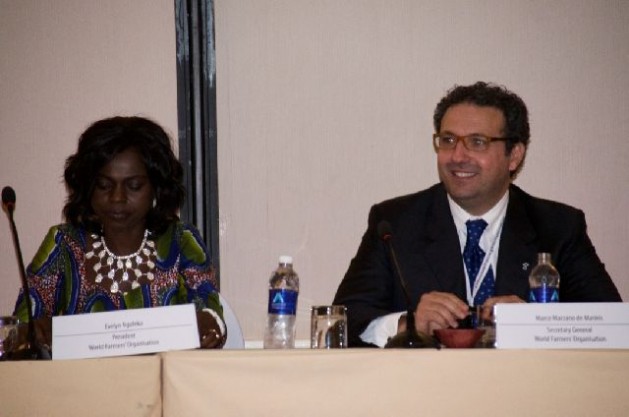 LIVINGSTONE, Zambia, May 5 2016 (IPS) - With recent data showing that 793 million people still go to bed hungry, ending hunger and poverty in 15 years is the next development challenge that world leaders have set for themselves.

As part of 17 Sustainable Development Goals (SDGs), these two have been made a special priority because of their impact on the world’s ability to achieve the rest.

The United Nations Food and Agriculture Organisation (FAO) understands the enormity of the challenge ahead, and the importance of the producers of food – the farmers – to meet the set target.

“As you know, the international community has committed to end worldwide hunger and poverty in 15 years, with the endorsement of the 2030 Agenda. FAO is fully engaged to help address this challenge. But we know that this is only possible with solid partnerships, especially with non-state actors,” said FAO Director General José Graziano Da Silva during the World Farmers’ Organisation General Assembly, which opened here Wednesday, May 4.

“Sustainable development for all is possible." -- Ambassador Amira Gornass of Sudan

In his video conference message to delegates, Da Silva highlighted the strategic role of farmers not only in producing food but also in the preservation of the environment, considering the impact of climate change on agriculture – singled out by scientists as the most vulnerable sector.

“Farmers are responsible for providing the food we all need but also helping preserve and sustain our natural resources,” he said.

The FAO chief called for solid support for farmers and said that they “should be placed at the core of any strategy for increased responsible investments in agriculture,” stressing the importance of the Principles for Responsible Investment in Agriculture and Food Systems.

Developed by the Inter-Agency Working Group (IAWG) composed of FAO, UNCTAD, IFAD and the World Bank, the guidelines draw attention to rights and livelihoods of rural populations and the need for socially and environmentally sustainable agricultural investments.

They cover all types of investment in agriculture, including between principal investors and contract farmers. The Principles are based on detailed research on the nature, extent and impacts of private sector investment and best practices in law and policy. They are intended to distil the lessons learned and provide a framework for national regulations, international investment agreements, global corporate social responsibility initiatives, and individual investor contracts.

Delegates at the WFO have been called upon to use the guidelines as important tools that can be applied as they push for farmer-centred ‘Partnerships for Growth’, the overarching theme for the 2016 General Assembly.

“I am proud to say that FAO and WFO have a concrete and strategic partnership to achieve food and nutrition security and sustainable agriculture worldwide. With other partners, we have improved statistics to understand the economic and social role of farmers’ organisations in sustainable development,” said the FAO chief.

Closely related to responsible investment in agriculture is the role of the Voluntary Guidelines on the Responsible Governance of Tenure of Land, Fisheries and Forests (VGGT), endorsed by the Committee on World Food Security in 2012, to serve as a reference to improve the governance of land tenure with the overarching goal of achieving food security for all and supporting the progressive realisation of the right to adequate food.

This was on the realisation that land tenure still represents one of the major challenges that farmers face, especially in developing countries. In particular, many small-scale farmers, especially women, work on land that they don’t own, exacerbating their poverty and lack of political power.

Given Lubinda, Zambia’s minister of agriculture, says that since “Africa is the home of small-scale farmers who create wealth and feed the world,” access to land, ownership and control, and modern technology, markets and financial resources are essential elements to enable them improve agricultural efficiency and productivity.

Adding impetus to the land and food security nexus as a key element in the achievement of the SDGs, the chair of the United Nations Committee on World Food Security (CFS), Ambassador Amira Gornass of Sudan, agreed that, “Farmers are the backbone of any efforts for food and nutrition security.”

“Sustainable development for all is possible,” she stressed, through partnerships with all actors of the food value chain to make sure that by 2030 “We end hunger and no one is left behind.”

And in keeping with the major theme of the meeting, WFO President Evelyn Nguleka says the role played by agriculture and farmers in tackling many of the goals set by the new agenda is fundamental, as it encompasses several of the proposed targets.

“The global economy is based on the assets of efficiency and profitability. Farmers, likewise all other categories of entrepreneurs, deserve to see their work duly compensated by an appropriate income and their products effectively absorbed by the market. Farmers are ready to invest their days in the field, while looking for new solutions to increase the profitability of their farms,” she said.