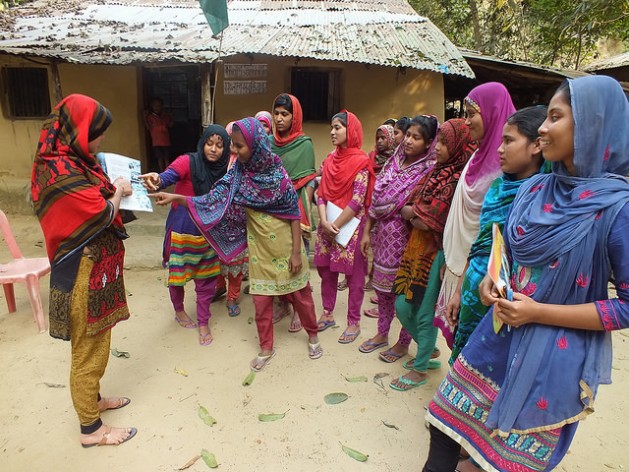 Her parents had settled on someone they considered a reasonably wealthy young man with a good family background, and did not want to miss the opportunity to wed their eldest daughter.

Farzana’s father, Mohammad Yusuf Ali, told IPS, “I thought it was a blessing when the proposal came to me from a family friend who said that the talented groom-to-be has his own business and ready home in the heart of a busy district town in Barisal, not far from where we live.”

No one defies Yusuf, an influential man in Char Nurul Amin village in Bhola, an island district in coastal Bangladesh, where most people depend on agriculture and fishing to make a living.

So, without consulting his daughter, Yusuf promised her as a bride and asked the family to prepare for the wedding.

"The power of knowledge is the key to success." -- Priyanka Rani Das, who quit school in 2012 due to extreme poverty but has since re-enrolled.

Farzana was only 14 years old and did not want to get married, but she didn’t know where to turn. Then Selina Aktar, who lives nearby, offered to help.

Aktar told IPS, “It was not surprising, but I was [still] shocked at how parents readily accept such marriage proposals without considering the age of their daughters.”

On the eve of the wedding, Aktar arranged a meeting with Farzana’s parents and asked them to call it off and let her stay in high school until she graduated.

Aktar is the facilitator of a seven-member Community Legal Services (CLS) organisation that advises students, parents and others on legal rights, including rights of adolescents.

“After several hours of discussions, we were able to convince Farzana’s parents that an educated girl was more precious than a girl thought to be a burden for her family at her early age,” Aktar said.

Abul Kaiser, a legal aid adviser with COAST, a leading NGO operating in the coastal regions of Bangladesh for more than three decades now, and whose work focuses mostly on social inequalities, told IPS, “The society is cursed with myths and most parents still biased on such medieval beliefs favour early marriage. A girl soon after her puberty is considered a burden to the family and parents look for opportunities to get rid her as soon as possible for so-called ‘protection’ of their daughters.”

To challenge the traditional beliefs that still haunt many communities in this modern age, COAST promotes informal learning through various programmes which they believe make a positive impact.

Executive Director Rezaul Karim Chowdhury told IPS, “The society needs to be empowered with information on the rights of such adolescent girls, and that is what we are facilitating. Most parents who may not have had opportunities of going to schools are expected to behave this way but our approach is to change this mindset so that a sense of acceptance exists.” 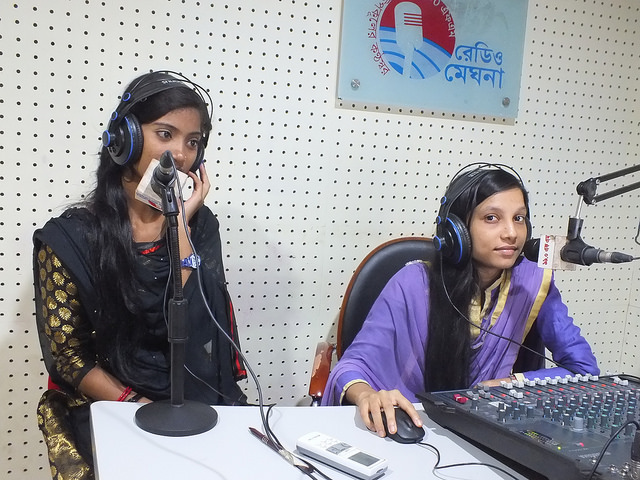 Radio Meghna, a community radio with limited broadcast frequency operating since February 2015 in south Bhola’s Char Fassion, has been at the forefront of such advocacy programmes.

Fatema Aktar Champa, a producer at the radio station, told IPS, “We have a large audience and so we take the opportunity to educate adolescents and also their parents on merits and demerits of early marriage. On various occasions we invite experts almost every day to talk about reproductive health, adolescents’ legal rights, need for education and the values, social injustices and many more allied issues linked to challenges of adolescents.”

Unlike other community radio stations, Radio Meghna is completely run by a team of about 20 adolescent girls.

Khadiza Banu, one of the producers, told IPS, “There is a general feeling that the radio team at Meghna has a wide range of acceptance in the society. On many occasions we broadcast programmes just to build trust on parents’ decisions to prevent early marriage and allow continuing education.”

Education is key to development, and girl’s education is especially important since it is undermined by patriarchal cultural norms.

In Cox’s Bazar district, COAST has taken a different approach to empowering adolescent girls to demand their rights and offering livelihood opportunities.

Despite traditional beliefs that devalue girls’ education, especially in poor, rural areas, adolescent girls in many regions of Bangladesh are getting help from a programme called Shonglap – dialogue that calls for capacity building and developing occupational skills for marginalised groups in society.

Priyanka Rani Das, who quit school in 2012 due to extreme poverty, has joined Shonglap in South Delpara of Khurushkul in coastal Cox’s Bazar district.

Part of a group of 35 adolescent girls, Das, who lost her father in 2009, has been playing a leading role among the girls who meet six days a week in the Shonglap session held at a rented thatched home in a suburb of Delpara.

Shy and soft-spoken, Das told IPS, “I had to drop out of school because I was required to work as a domestic worker and support my family of six.”

A neighbour, Jahanara Begum, who had been attending informal classes at a Shonglap session nearby, convinced Das that completing her education would help her earn a much better living in the long run.

Das told IPS, “I realized that girls are behind and neglected in the man-dominated society because of our lack of knowledge. So I left the job and joined Shonglap where they have demonstrated that the power of knowledge is the key to success.”

Das is one of about 3,000 teenagers in Cox’s Bazaar who returned to school after taking basic refresher classes and life skills training like sewing, repairing electronic goods, rearing domestic animals, running small tea shops, pottery, wood works and other activities that generate income.

Jahangir Alam, programme manager of the Shonglap Programme of COAST that runs the programme in Cox’s Bazar told IPS, “Those who graduate are also supported with interest-free loans to start a business – and so far over 1,600 such girls are regular earning members supporting their families.”

Ruksana Aktar, peer leader of the group in Delpara, said, “Shonglap is basically a platform for less privileged adolescent girls to unite and gather strength through common dialogues. Such chemistry for 12 months gives them the moral strength to regain lost hopes.”

Mosammet Deena Islam, 17, comes from a family of cobblers and had never been to school. Islam always dreamt of pursuing an education but poverty prevented her from going to school, even though schooling is free in Bangladesh.

She joined Shonglap in Delpara and after a few months in the group, she enrolled in a state-run school where she now attends grade 9 classes.

“Adolescent girls are encouraged to stay home after puberty to ensure ‘security’ and the most common reason is girls are used as earning members to supplement family income.”

Chowdhury said, “I believe such an approach of building opportunities for youth entrepreneurship to poor girls (for income generating activities) who wish to continue education, can considerably change their lives.”

Shonglap, spread over 33 districts in Bangladesh through a network of over 4,600 such groups, aims to give voices to these neglected girls and enable them to negotiate their own rights for life.

The Shonglap programme is being implemented by COAST and other NGOs with funding from Stromme Foundation of Norway.