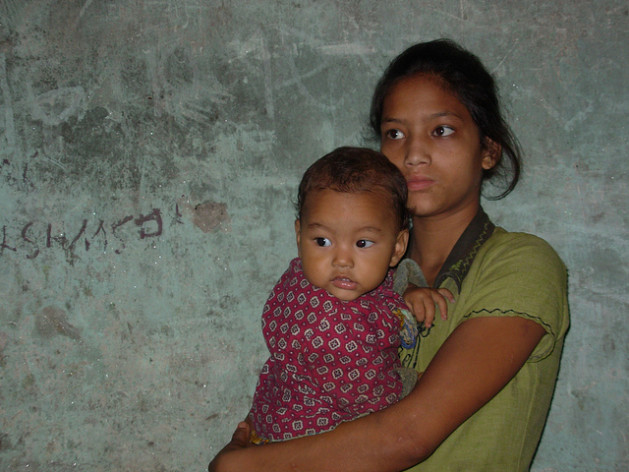 UNITED NATIONS, Oct 30 2013 (IPS) - Before we begin, perhaps we can set aside the stereotypes: no, she didn’t “mess herself up by following boys around”, and no, it is not in fact her fault that she became pregnant.

“The powerlessness girls experience is often a symptom of human rights violations of one form or another,” Richard Kollodge, editor of a flagship report launched Wednesday by the United Nations Population Fund (UNFPA), told IPS.

“When a girl is married against her will before 18, her rights are violated. When a girl becomes pregnant and is forced to leave school, her right to an education is denied,” he said.

This powerlessness affects young women deeply, and many are faced with excruciating choices that can lead to illegal abortion, social exile and even death.

In his forward to the report, UNFPA Executive Director Babatunde Osotimehim writes that, “A pregnancy-prevention intervention, whether an advertising campaign or a condom distribution programme, is irrelevant to a girl who has no power to make any consequential decisions.”

The report sheds light on a key problem when it comes to adolescent pregnancy: the lenses used to view young women are tainted.  An unnecessary burden of being solely responsible for a pregnancy is put on the back of a young girl, and she is rarely looked at as a victim.

UNFPA is calling for a new perspective on adolescent pregnancy, one that includes not only the teen’s behaviour as a cause of early pregnancy, but also at the actions of their families, communities and governments.

For example, when governments make laws limiting access to contraception, it contributes to negative views towards sexuality and women in the general community.  This trickles down to the schools, where sex education and available resources for young women are limited because they are not seen as necessary.

Parents can then develop negative views about sexuality and even about their own daughters, investing very little in their education and reinforcing a gender inequality in a young girl before she is even given a chance.

All this carries a high cost to national development aspirations as well. In Kenya, if the more than 200,000 teen mothers had jobs instead of children, they would have added 3.4 billion dollars to the economy – a sum equal to the value of Kenya’s entire construction sector.

If adolescent girls in Brazil and India had only waited to bear children until their early twenties, their nations would have greater economic productivity equal to over 3.5 billion and 7.7 billion dollars, respectively, the report says.

Meanwhile, just two cents of every dollar directed toward international development is spent on adolescent girls.

“One of the points the report makes is that the conversation cannot start in only one place,” Kollodge said. “The conversation has to occur simultaneously at all levels – at the national and policy levels, at the community level, in schools, among parents, among men and boys, and among peers.

“Research shows that interventions aimed at girls, and especially at changing girls’ behaviour, rarely have a positive impact,” he added. “No single intervention, or action by a single stakeholder, will make a real or lasting difference.”

Power is the most important aspect of a girl’s life – the power to stand up for herself, to protect herself and to choose when she is ready to have a family.

“The report makes the case that more often than not, pregnancy is not the result of a deliberate choice but rather, the result of an absence of choices and opportunities in life,” Kollodge said.

“When, for example, a 13-year-old girl is forced into marriage and is then expected by her husband, her parents, and her community to start having children right away, that girl clearly lacks power to decide whether, when and how often to have children.

Placing high emphasis on developing human capital of young girls, and giving them the opportunity to make sexual reproductive choices for themselves, not only promotes the health and protection of young girls, it also gives them a seat at the global development table.