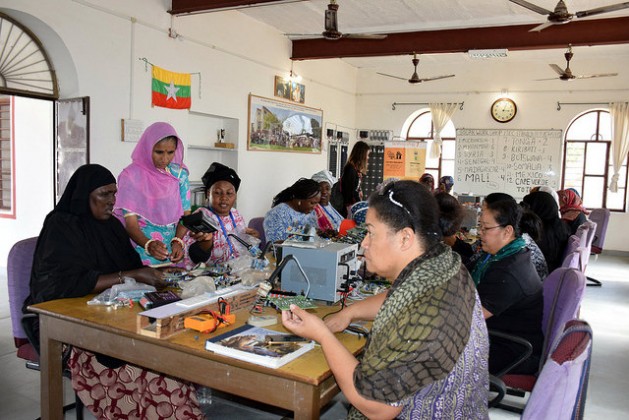 TILONIA, India, Mar 7 2017 (IPS) - On a summer morning in 2008, Magan Kawar decided to leave her village for a job. The very next day, her parents-in-law excommunicated her.

“They were very angry,” says the 52-year-old mother of two from Bhawani Khera village of Rajasthan’s Ajmer, a district 400 kms west of New Delhi.

"The world over, the lives of women are the same – there are too many challenges, but together, we can help each other rewrite our stories.” --Magan Kawar

“Women never stepped out of the home alone. To go outside of the village and work in an office alongside men was a disgrace. My parents-in-law said I had brought upon them that disgrace.”

But even as angry relatives and shocked neighbors watched in utter dismay, Kawar traveled to Tilonia, a village an hour away. Here, along with her husband, she became a technician at a rural innovation centre. As the world shut its doors behind her, her husband assured her: “Everything would be alright one day.”

Eight years later, Kawar who never studied beyond the third grade, is one of India’s top renewable energy experts. She is a lead instructor at the Barefoot College in Tilonia, a unique innovation and training centre where rural women from across India and the world are trained in solar technologies.

A college for barefoot engineers

The Barefoot College of Tilonia was established four decades ago by Bunker Roy, a visionary educationist and environmentalist who envisoned a place where women with little or no formal education could learn livelihood skills and play a leadership role in their communities.

The skills taught here are many, including sewing, welding and carpentry, among others, but the flagship programme of the college is a six-month biannual course in solar technology.

The course accepts women of 35 years and older, mostly from economically or socially underprivileged communities living in areas that have no electricity. There are two separate learning centres for Indian and international trainees who are called ‘Solar Mamas.’

Each of the Solar Mamas is selected by her own community and sent to the college by their respective governments where they are provided a fellowship by the government of India. It covers their cost of their stay at the college campus, including food and accommodation.

Currently, there are 30 Solar Mamas from 13 countries of Asia and Africa, including India, Myanmar, Syria, Mali, Sierra Leone and Botswana. The latest group is slated to graduate on Mar. 15 – the day they will receive 700 dollars as a stipend for the six months they spent here. For many, this is also an amount they can use as seed money to start a business in their home country. 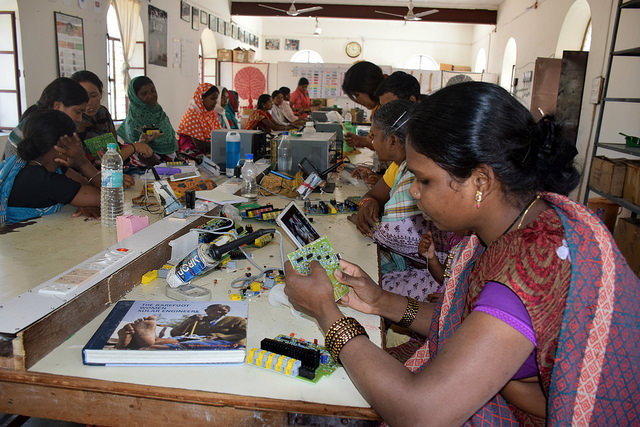 Amarmani Oraon, an indigenous woman from the conflict zone of Chhattisgarh in India, learns to make the circuit for a solar lantern. Oraon, who is not able to read or write, will soon become a Solar Mama – a barefoot solar engineer. Credit: Stella Paul/IPS

On the final Sunday of February, a group of local youths graduated from the Barefoot College after learning some livelihood skills. At their graduation ceremony, each of the students was presented with a solar lantern – made by the women solar technicians of the college.

The circuit of the lantern is complex, with dozens of minuscule electronic chips assembled on a 4-inch long plate. To teach this complex technology to the trainees when neither teacher nor student speak English or share a common language may seem extremely daunting to others, but the barefoot instructors have their own innovative methodology.

Explains Magan Kawar, “We first make a list of the most important parts and equipment and begin by making each trainee learn by heart the names. That is essential. After that, we communicate by pointing at a part, signs and actions. For example, I will take a circuit plate, point at a part and say, ‘press’. Or, I will then take a cable from the power testing machine, touch this to the plate, show it to the trainees and say, ’power testing’. They follow suit.”

There are no certificates awarded to the graduates, but then, this college is not a place that upholds formal educational norms. Instead, it practices a “very, very simple” method that champions imparting education that “truly empowers,” says Bunker Roy, who is also the director of the college.

“Imagine a woman who never traveled out of her village. Can’t read or write. Takes a flight and travels for 19 hours…comes to a strange country, strange food, strange language and in six months, she becomes a solar engineer using sign language. She knows more about solar engineering than a college graduate. What can be more exhilarating than this?” asks Roy. 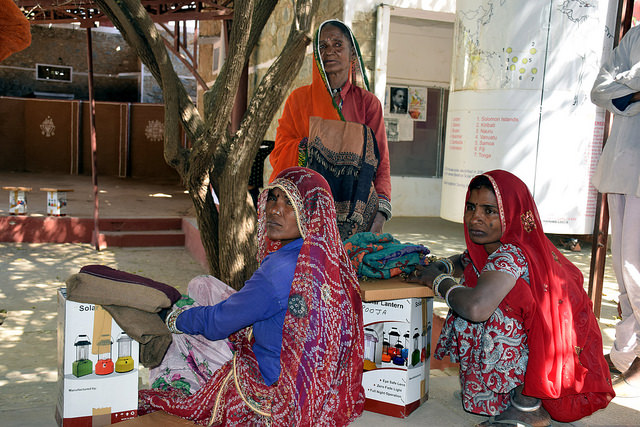 Women from local villages in India with solar lanterns made by Solar Mamas of the Barefoot College in Tilonia. Credit: Stella Paul/IPS

Elizabeth Halauafu, 42, is from Tonga, an island nation in the Pacific Ocean which considered is the third most vulnerable country on earth to rising sea levels from climate change. Despite its high vulnerability, however, the country has been slow in adopting climate adaptation measures, including renewable energy.

But as Tonga finally wakes up to play a stronger role in climate action, Bayes could become one of the pioneers in rural solar technology thanks to her training at the Barefoot College.

“I have already learned about solar installations. I can build a circuit, assemble and repair solar lights. Once I return to Tonga, I will be happy to join a job that will allow me to use my skills. I and my husband may also start a solar venture,” says Bayes, before recalling that when she returns home, the season of oceanic storms will begin when electricity will be scarce.

Solar Mamas Hala Naseef and and Azhar Sarhan are from Damascus. The government may try to show Damascus as an oasis in an otherwise war-torn Syria, but the ground realities are different: there are frequent power outrage and everyone lives in fear of a total collapse of the grid. Solar technology is not very popular, but could soon become the only source of power if the war does not end soon, says the duo.

It has been a long journey from Damascus to the Barefoot College for both Sarhan and Naseef, but both are quick to point out that the past five months, despite daunting odds, have been a very enriching experience.

“I miss home and the food…but to see other women who have come from difficult places, we forget our own struggle,“ says Naseef.

Lila Devi Gujjar, who teaches alongside Magan Kawar, says that most of their trainees come from conflict zones and carry a ‘burden of pain.”

“Many of them are survivors of abuse, violence and are broken in spirit. But here they find a way to forget their past and get new hope to rebuild their lives,” says Gujjar.

Kawar shares the story of Chantal, one of her recent trainees from the Democratic Republic of Congo who was raped several times in her home country. “It was her first escape from the violence. She first cried for days, then just immersed herself in learning. Somehow, she found our informal learning environment very soothing.

“And we also realized that the world over, the lives of women are the same – there are too many challenges, but together, we can help each other rewrite our stories,” says Kawar, who wrote her own story a few years ago by sending her two children to universities and inviting her parents-in-law to visit the Barefoot College.

“They came, saw me teaching and my mother-in-law said, ‘But it is just women educating each other!’ That day, she welcomed me back into the family,” says the barefoot engineer with a smile.