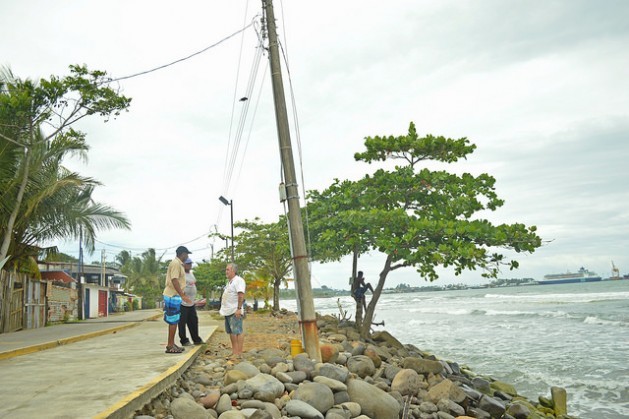 Reynaldo Charles and Ezequiel Hudson talk with Eliécer Quesada (left to right) about the state of the breakwater on which they are standing. This is the part where the waves reach closest to the houses, and at high tide the water crosses over the new bicycle lane and the street and reaches the homes, in the town of Cienaguita on Costa Rica’s Caribbean coast. Credit: Diego Arguedas/IPS

CIENEGUITA, Costa Rica, Mar 28 2017 (IPS) - Two years have gone by since the new government initiative which subsidises community works changed the face with which the coastal town of Cienaguita, on Costa Rica’s Caribbean coast, looks out to the sea.

In place of a battered path between the beach and the first houses, the investment allowed the construction of a paved coastal street with a bicycle lane, playgrounds for children and a sports space where groups of young people exercise around mid-morning, since March 2015.

“The boulevard has brought about a 180-degree change in this part of the community,” 67-year-old community leader Ezequiel Hudson told IPS about the new recreational spaces available to the 5,400 inhabitants of this town next to the city of Puerto Limón, in the centre of the country’s Caribbean coast.

However, the 2.5 million-dollar investment is threatened by coastal erosion and the rise in the level of water in the sea, which occasionally floods the new street.

Local residents of Cienaguita are worried about the effects that climate change may have on their town.

“We have documented a rise in the sea level and in wind and wave speeds.” -- Omar Lizano

The most conservative estimates put the sea level rise between 20 and 60 centimetres by 2100, but new studies point to a still higher increase, which would irremediably damage the life of the whole town, whose inhabitants make a living fishing or working on the docks of Puerto Limón.

“A few days ago the sea rose, and covered the whole street,” said Reynaldo Charles, head of the town’s Association for Integral Development, on a mid-March tour through the area with IPS.

Community leaders and local residents are afraid that the waves will erode the foundations of the road and bicycle lane and end up destroying the new streeet, which everyone is so proud of. Charles and Hudson report that most of the almond trees that adorned the avenue have already disappeared.

The impact is uneven. In some places, the beach is full of sticks that the tide has washed up, and in the most critical areas, the waves have completely devoured the sand and stop just a dozen metres from the first houses.

It was not always like this. Local residents say that until a few years ago, the beach was 50 metres wide and children used to play there and adults would fish, in this town located 160 kilometres east of the capital, which is reached by a long, steep road which winds its way across the Cordillera Central mountains.

But now, the waves reach the doors of the houses at high tide and residents have to protect their homes with sandbags.

“This has to be solved now or in a matter of a few years, because this is a question of prevention,” 68-year-old retiree Eliécer Quesada told IPS, while looking at the breakwater that stops the Caribbean sea just a few steps from his house.

In front of him there is practically no beach, just the constant breaking of waves against the rocks placed there a few years ago by the state power utility, ICE, to protect underground cables.

However, ICE has moved the internet cables inland to protect them and local residents worry that they will receive no more help from the power company in the future.

“Go see what it’s like in the Netherlands or Belgium, with huge breakwaters and dikes which even have roads running along them,” said Quesada, who worked as a sailor his whole life and visited ports around the world.

The rest of Costa Rica’s Caribbean coastline has similar problems with erosion, said oceanographer Omar Lizano, of the University of Costa Rica’s Centre for Research in Marine Sciences and Limnology (CIMAR).

“This phenomenon is happening all along our Caribbean coast and I suppose that the same thing will happen in Nicaragua, Panama and in the entire Caribbean region,” the expert in waves and ocean currents told IPS.

For several years, Lizano has been monitoring the beaches on the Caribbean and observing how the waves have gained metres and metres of sand.

This Central American country of 4.7 million people has coastline along the Pacific Ocean to the west and the Caribbean sea to the east.

“We have documented a rise in the sea level and in wind and wave speeds,” said the CIMAR expert.

In Costa Rica’s southern Caribbean coastal region, for example, the Cahuita National Park has lost dozens of metres of turtle nesting beach, which poses a threat to the turtle populations that spawn in the area.

A study published in 2014 by the Climate Change and Basins Programme of the Center for Tropical Agricultural Research and Education (CATIE) determined that the sea rises on average two millimetres per year along the coast of the eastern province of Limón, which covers the country’s entire Caribbean coast, and whose capital is Puerto Limón.

The report analysed the climate vulnerability of the coastal areas of Central America’s Caribbean region and concluded that the Costa Rican districts overlooking the sea have a high to very high adaptation capacity.

This is partly thanks to the level of community organisation, with groups such as the one headed by Charles, and the institutional support which translates into concrete actions, like the breakwater built by ICE and another one built nearby by the Council of Port Administration and Economic Development of the Atlantic Coast.

The people of Cienaguita are asking for more resources to design new protective structures, which could even be transformed into a seaside promenade for the community. Quesada advocates mitigating the erosion with tetrapods, a very stable tetrahedral concrete structure used as armour unit on breakwaters.

Lizano said the situation is not sustainable for much longer. Other countries can invest in infrastructure to protect their people, such as breakwaters or seawalls, or fill in the beaches to buy time, but this is not feasible for Costa Rica because of the high costs.

“If we can’t afford to do this, the only thing we can do is move to higher ground. This is our adaptation measure,” said the oceanographer.

Community leader Charles said he has asked for help from Puerto Limón municipal authorities and from national agencies, but they all claim that they do not have the necessary funds.

Costa Rica is in the initial stages of its National Adaptation Plan, a broad document that will define the path that the country will take to protect itself from the worst impacts of climate change, and urban settlements and coastal areas shall be priorities.

“I think we need to start to talk very seriously about the vulnerability of coastal communities like Cienaguita or Chacarita (on Costa Rica’s Pacific coast),” Pascal Girot, the head of climate change in the Ministry of Environment and Energy, told IPS.

This can lead to more concrete actions, he said. “They will be badly affected by the rise in the sea level,” said Girot, who will lead the national climate adaptation process.