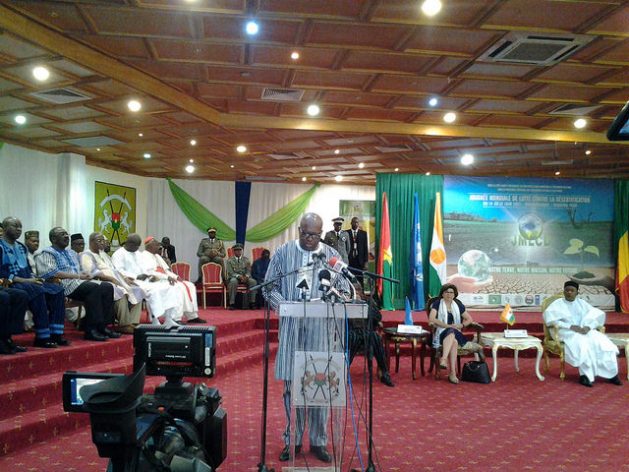 The President of Burkina Faso Roch Kaboré spoke on behalf of his peers Ibrahim Boubacar Kéita of Mali and Mahamadou Issoufou of Niger at the celebration of the World Day to Combat Desertification, June 2017. Credit: Younouss Youn/IPS

OUAGADOUGOU, Jun 16 2017 (IPS) - The 23rd World Day to Combat Desertification was celebrated in Burkina Faso’s capital of Ouagadougou on June 15 with a call to create two million jobs and restore 10 million hectares of degraded land.

Two-thirds of the African continent is desert or drylands, and nearly 75 percent of agricultural land is estimated to be degraded to varying degrees.

According to the UNCCD, two-thirds of the African continent is desert or drylands. This land is vital for agriculture and food production, but nearly 75 percent is estimated to be degraded to varying degrees.

The region is also affected by frequent and severe droughts, which have been particularly devastating in recent years in the Horn of Africa and the Sahel.

“Degraded lands is not an inevitable fate. Restoration is still possible. However, what will be more difficult is to feed 10 billion human beings in 30 years. The only place where there are still lands to do that is Africa. We need these lands to feed the whole planet. Therefore restoring lands is assuring food security for the whole planet,” said Barbut.

The high-level meeting that gathered 400 experts from around the world ended in the Call from Ouagadougou, urging citizens and governments to tackle desertification by restoring ten million hectares of land and by creating two million green jobs for youth, women and migrants.

“By 2050, the African population will double to two billion people,” Barbut noted. “I fear that as the population depends up to 80 percent on natural resources for their livelihoods, those resources will vanish given the great pressure on them.”

She added that young people emerging from this demographic growth will need decent jobs.

“In the next 15 years, 375 million young people will be entering the job market in Africa. Two hundred million of them will live in rural areas and 60 million will be obliged to leave those areas because of the pressure on natural resources.”

According to UNCCD, it is critical to enact policies that enable young people to own and rehabilitate degraded land, as there are nearly 500 million hectares of once fertile agricultural land that have been abandoned.

Talking specifically about Burkina Faso, which hosted the celebration, Batio Nestor Bassiere, the minister in charge of environmental issues, said, “From 2002 to 2013, 5.16 million hectares, 19 percent of the country’s territory, has been degraded by desertification.”

The situation is similar in most African countries. That’s why “it’s nonsense to sit and watch that happening without acting, given that the means for action are available,” said Barbut.

The Call from Ouagadougou comes from a common willingness to save the planet and Africa particularly from desertification. Gathered to discuss the topic “Our land, our house, our future,” linked to the fulfillment of the 3S Initiative (sustainability, stability, and security in Africa), the Call from Ouagadougou also invites African countries to create conditions for the development of new job opportunities by targeting the places where the access to land can be reinforced and land rights secured for vulnerable populations.

Development partners and other actors have also been called on to give their contributions. They were invited to help African countries to invest in rural infrastructure, land restoration, and the development of skills in chosen areas and among those facing migration and social risks.

For that, the UN agency in charge of the fight against desertification and its partners can rely on the firm support of the three heads of state who came for this 23rd World Day to Combat Desertification.

The President of Burkina Faso Roch Kaboré let the audience know that they are all “engaged to promote regional and global partnerships to find funds for investment in lands restoration and long term land management, wherever they will have opportunities to speak.”

Representing the African Union, Ahmed Elmekaa, Director, African Union/SAFGRAD, said drawing attention to the resolutions of desertification, land degradation and drought and on climate change are at the top of the African Union’s environmental agenda.

Taking advantage of the celebration, the national authorities gave the name of the very first executive secretary of the UN Convention to Combat Desertification, Hama Arba Diallo, to a street of the capital Ouagadougou. Experts from many countries also had the opportunity to visit sites showing the experience of Burkina Faso in combating desertification.

At a dinner ceremony held immediately following the closure of the ceremony, the UNCCD announced the winners of the Land for Life Award, Practical Action Sudan/UNEP from Sudan; Watershed Organization Trust from India. The Land for Life China award was given to Yingzhen Pan, Director General of National Bureau to Combat Desertification, China.