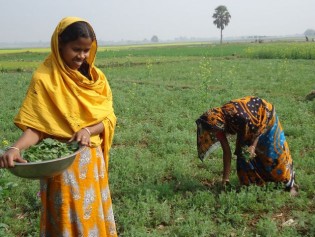 By Baher Kamal
Until a decade or so ago, experts and world organisations measured the impact of natural and man-made disasters in terms of human losses. For instance, they would inform about the number –and suffering—of human beings falling victims of extraordinary floods, droughts, heat or cold waves, and armed conflicts. This is not the case anymore.

By IPS World Desk
Ignoring the plight of jobless young people in sub-Saharan Africa is a recipe for political instability and global insecurity, warned a high-level symposium of Africa’s interior, environment and foreign affairs ministers in Ouagadougou, Burkina Faso.

By IPS World Desk
Today’s world is facing an unprecedented level of human mobility and migration is high on the political agenda all over the world.

By Baher Kamal
Worldwide, land degradation, severe droughts and advancing desertification are set to force populations to flee their homes and migrate. In the specific case of the Middle East and North of Africa (MENA), such an obliged choice implies the additional risk to turn peoples into easy prey to extremist, terrorist groups.

By Baher Kamal
By 2025 –that’s in less than 8 years from today-- 1.8 billion people will experience absolute water scarcity, and two thirds of the world will be living under water-stressed conditions. Now it is feared that advancing drought and deserts, growing water scarcity and decreasing food security may provoke a huge ‘tsunami” of climate refugees and migrants.

By Baher Kamal
Now that president Donald Trump has announced the withdrawal of the world’s largest polluter in history—the United States, from the Paris Accord, perhaps one of the most specific warnings is what a United Nations independent expert on rights and the environment has just said: “We should be fully aware that we cannot enjoy our basic human rights without a healthy environment.”

By James Jeffrey
Displaced pastoralists gather around newly arrived drums of brown water as a water truck speeds off to make further deliveries to settlements that have sprung up along the main road running out of Gode, one of the major urban centers in Ethiopia’s Somali region.
Next Page »
ADVERTISEMENT ADVERTISEMENT