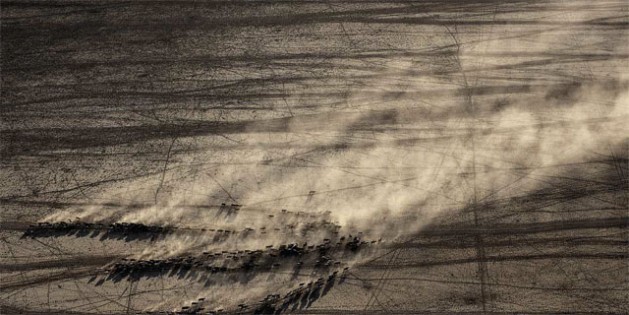 ROME, Jun 7 2017 (IPS) - By 2025 –that’s in less than 8 years from today– 1.8 billion people will experience absolute water scarcity, and two thirds of the world will be living under water-stressed conditions. Now it is feared that advancing drought and deserts, growing water scarcity and decreasing food security may provoke a huge ‘tsunami” of climate refugees and migrants.

By 2050, the demand for water is expected to increase by 50 per cent. As populations increase, especially in dry-land areas, more and more people are becoming dependent on fresh water supplies in land that are becoming degraded, the Bonn-based Convention secretariat warns.

“The world’s drought-prone and water scarce regions are often the main sources of refugees.” Monique Barbut.

Water scarcity is one of the greatest challenges of the twenty-first century, it underlines, adding that drought and water scarcity are considered to be the most far-reaching of all natural disasters, causing short and long-term economic and ecological losses as well as significant secondary and tertiary impacts.

To mitigate these impacts, drought preparedness that responds to human needs, while preserving environmental quality and ecosystems, requires involvement of all stakeholders including water users and water providers to achieve solutions for drought, explains UNCCD.

“Drought, a complex and slowly encroaching natural hazard with significant and pervasive socio-economic and environmental impacts, is known to cause more deaths and displace more people than any other natural disaster.”

On this, Monique Barbut, UNCCD Executive Secretary, reminds that the world’s drought-prone and water scarce regions are often the main sources of refugees.

Neither desertification nor drought on its own causes conflict or forced migration, but they can increase the risk of conflict and intensify on-going conflicts, she explains.

“Converging factors like political tension, weak institutions, economic marginalisation, lack of social safety nets or group rivalries create the conditions that make people unable to cope. The continuous drought and water scarcity from 2006 to 2010 in Syria is a recent well-known example.”

According to Convention, the geo-political and security challenges the world faces are complex, but a better implementing good land management practices can simultaneously help populations adapt to climate change and build resilience to drought; reduce the risk of forced migration and conflict over dwindling natural resources and secure sustainable agricultural and energy production.

“Land truly is the glue that holds our societies together. Reversing the effects of land degradation and desertification through sustainable land management (SLM) is not only achievable; it is the logical, cost-effective next step for national and international development agendas…”

UNCCD informs that 12 million hectares of productive land become barren every year due to desertification and drought alone, which is a lost opportunity to produce 20 million tons of grain. “We cannot afford to keep degrading land when we are expected to increase food production by 70 per cent by 2050 to feed the entire world population.”

“Sustainable intensification of food production, with fewer inputs, that avoids further deforestation and cropland expansion into vulnerable areas should be a priority for action for policy makers, investors and smallholder farmers.”

Meantime, the Convention’s secretariat reports that the increase in droughts and flash floods that are stronger, more frequent and widespread is destroying the land – the Earth’s main fresh water store. With up to 40 per cent of all intrastate conflicts in the past 60 years are linked to the control and allocation of natural resources, the exposure of more and more poor people to water scarcity and hunger opens the door to the failure of fragile states and regional conflicts, according to UNCCD.

“Non-state actor groups are increasingly taking advantage of large cross-border migration flows and abandoned lands. Where natural assets including land are poorly managed, violence might become the dominant means of resource control, forcing natural resource assets out of the hands of legitimate government.”

The number of international migrants worldwide has continued to grow rapidly over the past fifteen years reaching 244 million in 2015, up from 222 million in 2010 and 173 million in 2000.

Here, the UN Convention to Combat Desertification reminds that behind these numbers is the links between migration and development challenges, in particular, the consequences of environmental degradation, political instability, food insecurity and poverty and the importance of addressing the push and pull factors, and the root causes of irregular migration.

Losing productive land is driving people to make risky life choices, it adds and explains that in rural areas where people depend on scarce productive land resources, land degradation is a driver of forced migration.

“Africa is particularly susceptible since more than 90 per vent of our economy depends on a climate-sensitive natural resource base like rain-fed, subsistence agriculture. Unless we change the way we manage our land, in the next 30 years we may leave a billion or more vulnerable poor people with little choice but to fight or flee.”

Improving yields and land productivity will allow the time to increase food security and income of the users of the land and the poorest farmers, the UNCCD recommends. “This in turn stabilises the income of the rural population and avoids unnecessary movement of people.”

The UN Convention to Combat Desertification works with partners such as the International Organization for Migration to address the challenges arising from land degradation, large-scale population movements and their consequences, while aiming to demonstrate how the international community could leverage the skills and capacities of migrants along with the remittances, sent home by migrants, to build resilience.