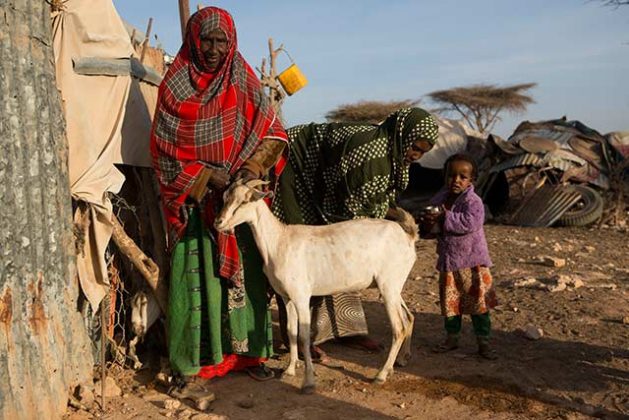 ROME, Jun 15 2017 (IPS) - Another famine in former European colonies in Africa and another time in its Eastern region, with Ethiopia and Somalia among the major victims of drought and made-made climate disasters mainly caused by US and European multinational business.

While an estimated 7.8 million people are food insecure in Ethiopia, where drought has dented crop and pasture output in southern regions, in the specific case of Somalia, the United Nations reports that 3.2 million people—that’s one third of its estimated 11 million inhabitants, are now on a ‘hunger knife-edge.’

Meanwhile, more than six million people are affected, of whom only about three million have been reached with food rations.

· Approximate cost of each FAO treatment per animal: $0.40

· Cost to a pastoralist to replace one dead animal: $40

“The humanitarian crisis has deteriorated more rapidly than was originally projected,” the Deputy Special Representative of the Secretary-General for Somalia, Raisedon Zenenga, few weeks ago told the Council in New York.

“People are dying and need protection, particularly women and children, as drought conditions force them to migrate from rural areas to town, and as sexual violence increases in displacement camps.”

Worldwide, land degradation, severe droughts and advancing desertification are set to force populations to flee their homes and migrate.

Over the next few decades, worldwide, close to 135 million people are at risk of being permanently displaced by desertification and land degradation, says Monique Barbut, executive secretary of the United Nations Convention to Combat Desertification (UNCCD).

“If they don’t migrate, the young and unemployed are also at more risk of falling victim to extremist groups that exploit and recruit the disillusioned and vulnerable, “ added Barbut in her message on the occasion of this year’s World Day to Combat Desertification (WDCD) marked on June 17.

They are missing out on the opportunity to benefit from increasing global demand and wider sustained economic growth. In fact, the economic losses they suffer and growing inequalities they perceive means many people feel they are being left behind, Barbut said.

“They look for a route out. Migration is well-trodden path. People have always migrated, on a temporary basis, to survive when times are tough. The ambitious often chose to move for a better job and a brighter future.” 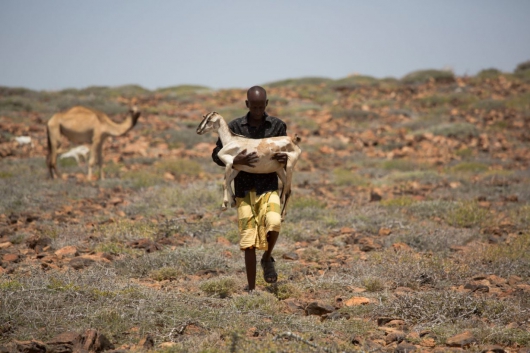 Famine-prevention: The livestock protection campaign is vital for vulnerable pastoralists who rely on their animals to survive. Credit: FAO

“It is becoming clear though that the element of hope and choice in migration is increasingly missing. Once, migration was temporary or ambitious. Now, it is often permanent and distressed.”

In parallel, concerned United Nations agencies have been strongly mobilised to help mitigate the new famine facing African countries. One of them, the Food and Agriculture Organization of the United Nations (FAO), has been pushing forward with a massive campaign that has so far treated more than 12 million animals in less than three months.

The objective is to protect the livelihoods of hundreds of thousands of families who rely on their livestock’s meat and milk for survival. By mid-July, the UN specialised body will have reached 22 million animals, benefiting over 3 million people.

“Saving animals saves human lives and livelihoods. When animals are weakened by drought, they stop producing milk or die which means people go hungry and families are pushed out of self-reliance,” said Richard Trenchard, FAO Representative in Somalia. 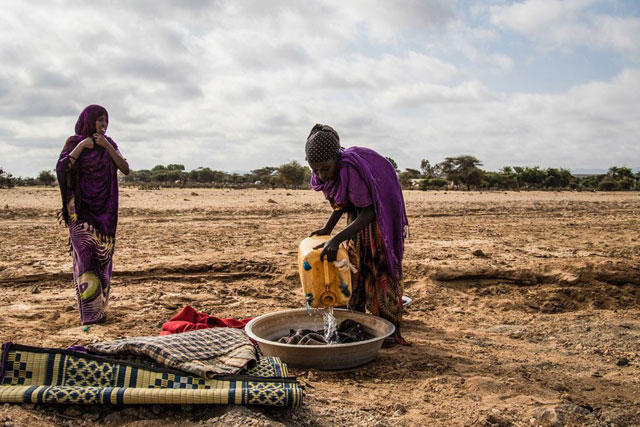 Around 3.2 million people in Somalia are on a hunger knife-edge, the agency reports, adding that the majority live in rural areas and livestock such as goats, camels, sheep and cattle are their main source of food and income.

“What we have heard again and again from displaced people in camps is that when they lost their animals, everything collapsed. It is a steep, long climb for them to get back on their feet again. We have stepped up our response to reach families before that happens,” added Trenchard. “Livelihoods are their best defence against famine”.

In Somalia, 6.7 million people face acute hunger as threat of famine persists, according to a FAO new assessment.

The UN agency is deploying 150 veterinary teams across Somalia to treat goats and sheep as well as cattle and camels – up to 270,000 animals each day. The teams are made up of local Somali veterinary professionals.

Livestock badly weakened by the lack of feed and water are highly susceptible to illnesses and parasites but are too weak to withstand vaccination, the specialised organisation reports.

As part of an integrated response program to improve the conditions of livestock, animals are treated with multivitamin boosters, medicines that kill off internal and external parasites, deworming, and other treatments to fight respiratory infections.

The simple and cost-effective care being provided by the FAO vet teams is reinforcing animals’ coping capacity and keeping them alive and productive. (See Key Numbers Box).

Meanwhile, through its Famine Prevention and Drought Response Plan, the UN specialised body is delivering large-scale, strategic combinations of assistance to prevent famine in Somalia.

In addition to livestock treatments, this includes giving rural families cash for food purchases, helping communities rehabilitate agricultural infrastructure, and providing farmers with vouchers for locally-sourced seeds along with tractor services that reduce their labour burden.