ROME, Aug 7 2017 (IPS) - Until a decade or so ago, experts and world organisations measured the impact of natural and man-made disasters in terms of human losses. For instance, they would inform about the number –and suffering—of human beings falling victims of extraordinary floods, droughts, heat or cold waves, and armed conflicts. This is not the case anymore.

Now the measurements are made in terms of money, i.e., how much losses in terms of money a disaster can cause to world economy–more specifically to Gross Domestic Product. In other words, human suffering is now being calculated in terms of dollars. This way, the traditional human welfare related question “how are you today?” might gradually become “how much are you worth today?”

This trend to “monetising” instead of “humanising” shockingly applies also to what can be considered as the major social and human drama the world has been facing all along its known history—the gender gap.

True that every now and then reports remind about women representing more than 50 per cent of all human beings; that they are the human “life-givers”; the guardians of family and nature and the engine of social coherence, let alone their essential contribution to feeding the world. Indigenous women, for instance, are the key protectors of world’s biodiversity. See: Indigenous Peoples Lands Guard 80 Per Cent of World’s Biodiversity.

Here, the facts speak by themselves: globally, women make up 43 per cent of the agricultural labour force. 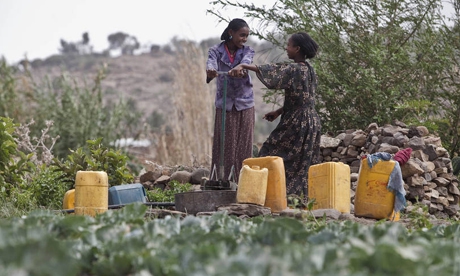 Young girls and women collecting water from a water spring situated in a cabbage field owned by a local woman farmer and FAO-EU Project beneficiary in Ethiopia. Credit: FAO

In many poor countries, more than 95 per cent of all economically active women work in agriculture. In sub-Saharan Africa, for instance, women hold 10 per cent of the credit available to smallholder agriculture, they add.

These facts, which have been cited among others by the United Nations Convention toCombat Desertification (UNCCD), also indicate that closing the gender gap could create 240 million jobs by 2025 and add US 12 trillion dollars to annual global growth (GDP), according to a report by McKinsey and Company.

Other major UN specialised bodies, like the Food and Agriculture Organization (FAO) have systematically been highlighting the essential contribution of women.

Rural women and girls are key agents of change to free the world from hunger and extreme poverty, said FAO’s Director-General José Graziano da Silva at a special side-event on gender equality and women’s empowerment on the occasion of the 40th Session of the FAO Conference (Rome, 3-8 July 2017).

“Their role goes beyond agricultural production and extends throughout the food system but, as we all know, rural women continue to face multiple constraints,” he said, noting that they have less access to productive resources and employment opportunities.

Graziano da Silva also stressed that women are more affected by the consequences of conflicts and crises.

“During a drought situation, for example, a greater workload is placed on women. In Africa and Latin America, women can spend many hours a day searching for water in times of drought and then need to walk many kilometres carrying a bucket of water on their head,” he said. 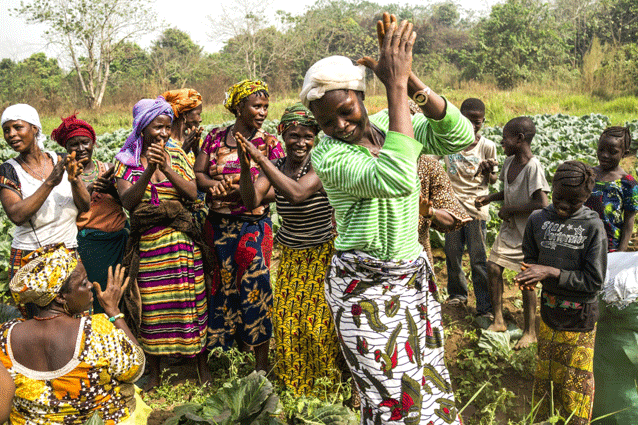 In spite of this, women worldwide continue to be victims of flagrant inequalities. See: “It Will Take 170 Years for Women to Be Paid as Men Are”

The need to accelerate women’s empowerment in fighting droughts and desertification will be on the table of the UNCCD’s 13 Conference of the Parties (COP 13), that’s the signatories to the Convention, scheduled to take place in Ordos, China, 6–16 September 2017

“A focused and systematic approach to bridge the gender inequalities linked to women’s land use and management, it adds, can improve the livelihoods of women and girls and their families and the conditions of the ecosystems that supply these needs, and enhance their resilience to drought.”

Their increasing exposure to extreme weather events –drought, unpredictable rainfall–accentuates their vulnerability, and compels them to take ever-greater risks to meet their needs, UNCCD underlines.

“Women in land-dependent communities affected by the impacts of land degradation and desertification require special attention in order for them to access the resources they need to provide for their households and make communities resilient and stable.”

According to the Convention, the Scientific Conceptual Framework for Land Degradation Neutrality states that the drivers of land degradation are not gender neutral. It stresses that poverty is both a root cause and a consequence of land degradation, with gender inequality playing a significant role in the process, worsening the impacts on women.

On this, the UNCCD Science Policy Interface recommends integrating gender considerations into implementation of the Convention, including through Land Degradation Neutrality (LDN) planning and implementation, decision-making, stakeholder engagement and the preliminary assessments for LDN.

“Evidence shows that gender equality, women’s empowerment and women’s full and equal participation and leadership in the economy are vital in achieving sustainable development, and significantly enhance economic growth and productivity.”

Women are not just percentages nor can they be quantified merely in terms of dollars.