Article II of this three-part series on inequality, focuses on the impact of discrimination on women. Part III will tackle the issue of the future and quality of jobs. Part I has dealt with the alarming deepening inequality worldwide. 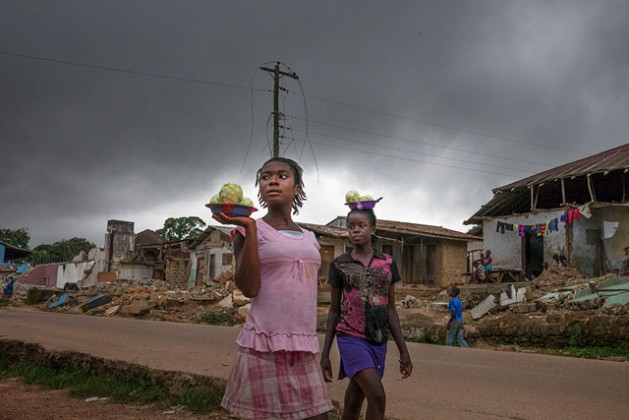 Infrastructure across Liberia, including electricity installations, was destroyed during the country's protracted civil war (1989-2003). Above, girls in the town of Totota in Bong County walk past homes that are being demolished as the government rebuilds roadways. Photo: UN Women

ROME, Jan 17 2017 (IPS) - While just eight individuals, all of them men, own the same wealth as 3.6 billion people — half of world’s total population — it will take 170 years for women to be paid the same as men, warns a new major report on inequality.

In it, OXFAM warns that women, who are often employed in low pay sectors, face high levels of discrimination in the workplace, and who take on a disproportionate amount of unpaid care work, often find themselves at the bottom of the pile.

“On current trends it will take 170 years for women to be paid the same as men.”

‘An economy for the 99 per cent’ also reveals how big business and the super-rich are fuelling the inequality crisis, adds OXFAM, an international confederation of 19 organisations working in more than 90 countries.

Oxfam interviewed women working in a garment factory in Vietnam who work 12 hours a day, 6 days a week and still struggle to get by on the 1 dollar an hour they earn producing clothes for some of the world’s biggest fashion brands.

“The CEOs of these companies are some of the highest paid people in the world.”

“Around the world, women make up the majority of those in the worst-paid and least secure jobs, while shouldering the bulk of the responsibility for unpaid care work. This is not an accident; our current economic model depends on this supply of cheap or free labour.“

When public services are cut because big business and wealthy individuals don’t pay their fair share of taxes, Ratcliff told IPS, it is often women who are hit hardest – for example when education isn’t free, it is girls who tend to miss out.

“Women face discrimination at a household and institutional level, with political and economic elites dominated by men – all 8 of the richest people are men and 89 percent of all billionaires are men.”

According to Ratcliff, economies must be managed to ensure that women have the same economic opportunities as men.

“For example, by ensuring equal access to education, by providing better and more affordable child care services, by investing in basic infrastructure and services, and by challenging social norms about the role of women in our societies.” If Women Had the Same Resources As Men…

Being among the poorest of the poor, and in spite of their critical contributions and of making up half of agriculture workers, rural women and farmers are major victims of inequality.

“If women had the same access to resources as men, there would be up to 150 million fewer hungry people in the world, ” said Neven Mimica, European Union Commissioner for International Cooperation and Development, at a recent high-level event co-organised by four UN specialised bodies, the European Commission and the Slovak Presidency of the Council of the European Union.

“It is often said that if you educate a woman, you educate a whole generation. The same is true when we empower women across the board — not only through access to knowledge, but also to resources, to equal opportunities, and by giving them a voice… Yet current statistics suggest that the world is falling short on this score.”

The European Commissioner went on to say that agricultural yields would rise by almost a third if women had the same access to resources as men.

“As a result, there would be up to 150 million fewer hungry people in the world. And we know that children have significantly better prospects for the future when their mothers are healthy, wealthy and educated. Especially during the first 1,000 days of a child’s life.”

Women, Half of Agriculture Workers, But…

In developing countries, women make up 45 per cent of the agricultural labour force, ranging from 20 per cent in Latin America to up to 60 per cent in parts of Africa and Asia, according to the Food and Agriculture Organisation of the United Nations (FAO).

“And they are harder workers — in Africa and Asia and the Pacific, women typically work 12-13 hours more than men per week.”

Across all regions, women are less likely than men to own or control land, and their plots often are of poorer quality. Less than 20 per cent of the world’s landholders are women.

“Women farmers generate productivity gains. And women reinvest up to 90 per cent of their earnings back into their households — that’s money spent on nutrition, food, healthcare, school, and income-generating activities — helping to break the cycle of inter-generational poverty.”

With this data in hand, José Graziano da Silva, FAO Director General, assured at last month’s high-level meeting that achieving gender equality and empowering women “is not only the right thing to do but is a critical ingredient in the fight against extreme poverty, hunger and malnutrition.”

The meeting was co-organised by FAO, the European Commission and the Slovak Presidency of the Council of the European Union in collaboration with the International Fund for Agricultural Development (IFAD), the World Food Programme (WFP) and UN Women.

At it, Graziano da Silva affirmed that “Women are the backbone of our work in agriculture,” noting that they comprise 45 per cent of the agricultural labour force in developing countries, with that figure rising to 60 per cent in parts of Africa and Asia.

These numbers underscore the importance of ensuring that rural women enjoy a level playing field, according to the FAO Director-General

In her remarks, Gabriela Matecná, Slovak Minister of Agriculture and Rural Development and President of the Council of the European Union over last year‘s second semester, said, “the gender gap imposes significant costs on society, in terms of lost agricultural output, food security and economic growth.”

“We see time and time again that gender equality opens doors for entire communities to strengthen their food and nutrition security and to improve their social and economic well-being,” he said, adding: “Empowering rural women is indeed empowering humanity.”

“It is only through empowering women farmers that we can unlock the power of global food systems. Supporting them is essential in creating resilience, building stronger businesses, and advancing food security in the long term,” Denise Brown, Director of Emergencies at World Food Programme (WFP), stated.