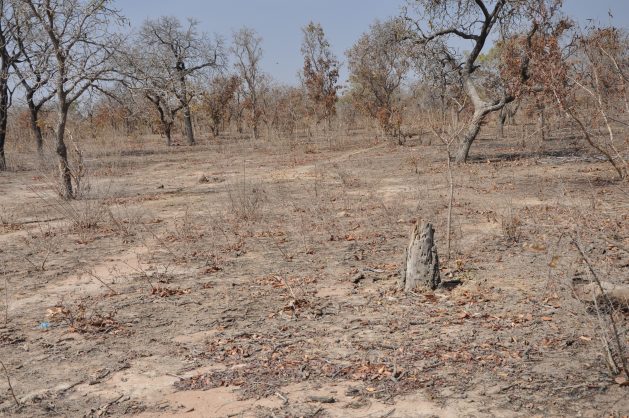 The impacts of fire and ecosystem fragmentation on a community can be devastating. Credit: Cheikh Mbow/ICRAF/Flickr

NAIROBI, Kenya, Aug 29 2017 (IPS) - Africa’s population continues to grow, putting intense pressure on available land for agricultural purposes and life-supporting ecosystem services even as the scenario is compounded by the adverse impacts of climate change.

But the adoption of land degradation neutrality (LDN) measures is helping ensure food and water security, and contributing to sustainable socioeconomic development and wellbeing, especially for Eastern African countries that face immense challenges.

With over half of sub-Saharan Africa consisting of arid and semi-arid lands, the livelihoods of over 400 million people who inhabit these areas are at risk.

LDN will also help to achieve some of the Sustainable Development Goals (SDGs) and Africa’s Vision 2063, launched in 2013 a strategic framework for the socioeconomic transformation of the continent over the next 50 years.

According to Economics of Land Degradation Initiative, a report by the United Nations Convention to Combat Desertification (UNCCD) and others, land degradation and desertification are among the world’s greatest environmental challenges. It is estimated that desertification affects approximately 33 per cent of the global land surface. Over the past 40 years, erosion has rendered close to one-third of the world’s arable land unproductive.

Africa is the most exposed, with desertification affecting around 45 per cent of the continent’s land area, out of which 55 per cent is at high or very high risk of further degradation. Dry lands are particularly affected by land degradation and with over 50 per cent of sub-Saharan Africa being arid and semi-arid lands, the livelihoods of over 400 million who inhabit these areas are at risk.

In an interview with IPS, Ermias Betemariam, a land health scientist at the World Agroforestry Centre (ICRAF) with research interest in land degradation, landscape ecology, restoration ecology, soil carbon dynamics and spatial science, said that increasing population is an important driver of the rising demand for natural resources and the ecosystem services they provide, including food and energy.

“Africa, in particular, faces the critical challenge of its population continuing to grow at a rapid rate while natural resources, arable, grazing, forest lands, and water resources become increasingly scarce and degraded,” he said.

Betemariam noted that food is mostly produced by small-scale farmers who may not have the resources, or be in an enabling economic and policy environment, to close the “yield gap” between current and potential yields.

Hence the increase in food needs of the rising population in Africa has been met by expanding agriculture into new lands which are often marginal, semi-arid zones that are climatically risky for agriculture – changing the local landscape, economy and society.

Such change in land use has been recorded as a major cause of land degradation in Africa.

Betemariam explained that achieving SDG 15.3 (a land degradation neutral world by 2030) is critical for Sub-Saharan African countries. LDN is about maintaining and improving the productivity of land resources by sustainably managing and restoring soil, water and biodiversity assets, while at the same time contributing to poverty reduction, food and water security, and climate change adaptation and mitigation.

UNCCD says that so far 110 countries have committed to set LDN targets. The Secretariat and the Global Mechanism of the UNCCD are supporting governments in this process, including the definition of national baselines, targets and associated measures to achieve LDN by 2030 through the LDN Target Setting Programme (TSP).

“LDN is a target that can be implemented at local, national and even regional scales,” Betemariam told IPS. “At the heart of LDN are Sustainable Land Management (SLM) practices that help close yield gaps and enhance the resilience of land resources and communities that directly depend on them while avoiding further degradation.”

For example, he cited the farmer-managed natural resources in Niger and livestock enclosure management and soil conservation at the Konso Cultural Landscape in Ethiopia which is registered by UNESCO.

Oliver Wasonga, a dryland ecology and pastoral livelihoods specialist at the University of Nairobi, Kenya, says there is little investment in sustainable land management, especially in the drylands, and yet many communities living in rural Africa increasingly lose their livelihoods due to loss of land productivity resulting from land degradation.

Investment in restoration of degraded land is critical in enhancing household food and income security, he said, especially for the majority of Africa’s rural populace that relies almost entirely on natural resources for their livelihoods.

“This is more so for the millions of pastoralists and agro-pastoralists who inhabit the dry lands of Africa that form more than 40 per cent of the continent’s land surface. Any attempt to attain LDN is therefore key to achieving both poverty reduction and development goals,” said Wasonga.

He said there is a need to create a platform to showcase success stories that may motivate land users, decision makers, development agencies, and private investors to act better. And also to reward individuals, communities, and institutions for their outstanding efforts towards a LDN continent as an incentive to engage and invest in sustainable land management (SLM) practices.

Investment in SLM provides opportunities for not only enhancing the current productivity of land, but also offers solutions that go beyond technological approaches by including aspects of social participation and policy dialogue.

Levis Kavagi, Africa Coordinator, Ecosystems and Biodiversity at the United Nations Environment Programme, said SLM ensures that maximisation of benefits from land resources do not cause ecological damage, economic risks and social disparity. The approach combines maintaining and enhancing condition of land which is still in good health, as well as restoration of the already degraded land.

However, the success of any SLM programmes is dependent upon the governance system. A governance system that recognises and integrates customary institutions and practices is shown to yield better results than statutory interventions.

“African governments need to develop policies that promote SLM and specifically those aimed at restoration of degraded lands. There is need for ‘win-win’ approaches with multiple short- and long-term benefits in combating land degradation, as well as restoring or maintaining ecosystem functions and services, thereby contributing to sustainable livelihoods and rural development,” said Kavagi.

Involvement of land users and communities is key to success of any attempt to promote SLM and restoration of degraded lands, he stressed. Such approaches should seek integration of low-cost customary institutions and practices that are familiar to the communities as a way of decentralizing governance.

There is also a need to sensitize and motivate the private sector to invest in SLM. Payment for ecosystem services should be promoted as way of giving incentive to the communities to use land in a sustainable manner, he concluded.