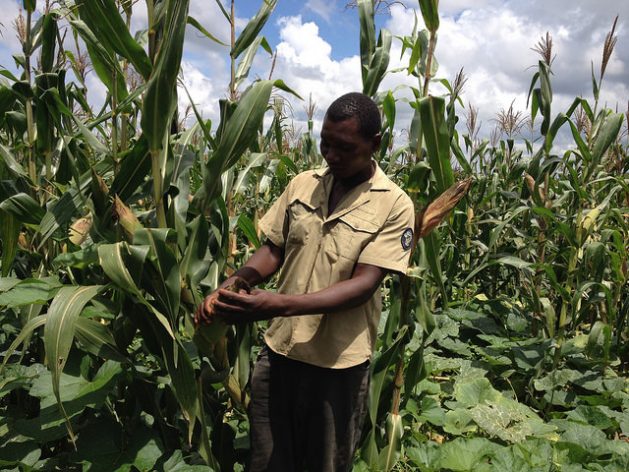 PEMBA, Zambia, Jun 29 2017 (IPS) - Frequent extreme weather and climate shifts pose a challenge to already vulnerable groups such as smallholder farmers in the developing world. Between 2004 and 2014, farmers are said to have endured the brunt of the 100-billion-dollar cost of climate-related disasters.

In Zambia, the World Food Programme (WFP) has been piloting such an intervention for the past two years in Pemba district of Southern Province. Premised on improving credit uptake and savings – two key enablers for smallholder agricultural growth – the insurance product targets farmers who have taken the initiative of engaging in climate smart agricultural practices (Conservation Agriculture).

But to what extent has the project helped smallholders? Abshy Nchimunya of Kayokela Farmers Club thinks to a large extent. While there has not been any pay-out in the two-year pilot project cycle, the 34-year-old believes the mere fact of being under insurance cover has been enough incentive for farmers’ resilience to climate shocks.

“I want to thank DAPP and its collaborating partners for initiating a programme like this which has opened my eyes to begin crop diversification so as to improve food security in my household,” says Nchimunya. “Besides this, the opportunity of accessing inputs on time through micro finance made me plant early and a large portion (2.5ha) which has not happened in my farming practices in a long time.”

Over the years, Nchimunya, just like many other farmers in his area, had always grown maize as a major crop. But when the project came, especially with insurance cover as a reward for conservation farming practices, it became an incentive for farmers to diversify into other crops such as cowpea and beans.

And 29-year-old Choobwe Meldah of Sinamanjolo village of the Ndondi Agriculture Camp thinks the project’s emphasis on diversification has uplifted the female voices in male-dominated households where legumes are usually considered female crops with little or no importance attached.

“Over the years, we have been conditioned and made to believe that maize is the best crop with a few legumes grown within the main field just for home consumption, and mainly cultivated by us women,” says Choobwe.

Since R4 however, “extension services have improved; coupled with timely weather information provision from fellow farmers in charge of project rain gauge stations, we have confidence to grow other crops and now treat farming as a business.”

By providing key services that are generally hard to access – financing for inputs, reliable weather information, a profitable market and simple saving schemes – R4’s integrated approach to risk reduction has somehow changed the dominant monoculture mindset of more than 2,000 farmers.

“So far, the project has shown a lot of impact—at least 60 to 70 percent of farmers are practicing conservation agriculture; all these farmers are accessing insurance, micro-credit, and we have taken it as a matter of principle to ensure that they all belong to small village saving groups,” explains Nervous Nsansaula of Development Aid from People to People (DAPP), a lead implementing Agency of R4.

As the pilot project ends this year, a four-year expansion project is on the horizon to cover the other four districts of Southern Province. “With a lot of success stories recorded, the plan is now to extend the project for four years and reach a target of 17, 000 smallholder farmers in four districts,” says Stanley Ndhlovu, R4 Project Manager at WFP Zambia office.

It is such success stories that have led agricultural stakeholders and development agencies to seek sustainable ways of up-scaling weather-based adaptation for farmers who largely rely on rainfall.

Hosted by the CGIAR research program on Climate Change, Agriculture and Food Security (CCAFS), the Technical Centre for Agricultural and Rural Cooperation (CTA) and the Syngenta Foundation for Sustainable Agriculture (SFSA), how to strengthen the momentum of weather-based adaptation to climate change was part of a fortnight long UNFCCC Subsidiary Body for Scientific and Technological Advice (SBSTA) talks in May 2017, in Bonn, Germany.

“Through research, we have seen that formally insuring farmers against damage and loss caused by climate change is effective,” he said. “Insurance not only compensates smallholders to avoid catastrophic losses, it also allows them to invest and adapt, even when they don’t receive a pay-out.”

His plea is to ensure that all key players are engaged in order to reach more farmers, noting the importance of bringing the insurance industry together with climate change and agricultural researchers to develop truly global solutions.

“In one of our flagship projects in Southern Africa alone, 200,000 maize and livestock farmers in Zimbabwe, Malawi and Zambia will have access to weather-based information services by 2019, which will help bolster the insurance market as one of the elements in a bundle of adaptation solutions,” said Hailu, adding that such innovations could pave the way for a proper scale-up.

Working in partnership with the Southern African Confederation of Agricultural Unions (SACAU), the project focuses on a challenge that has critical importance for Southern Africa now and in the future. Climate change is affecting all sectors of the economy in the region, but especially agriculture, which is generally rain-fed.

And Ishmael Sunga, CEO, SACAU, said: “The Southern African Confederation of Agricultural Unions (SACAU) is actively encouraging farmers to take up weather-based insurance because we believe it is an important incentive for investment as well as a safety net for climate-related losses.

“SACAU is currently working with the private sector to help expand an innovative weather-based insurance solution after successful pilots in Zimbabwe. We strongly believe that scaling up index-based insurance on a regional level can effectively share the burden of climate change while also breaking the cycle of low risk, low investment and low productivity.”

Private sector involvement in agricultural development is heralded as a new normal. But how much insulation is provided to poor farmers from a profit-driven industry is usually the question that arises. For example, the first year in the WFP Zambia rural resilience pilot project, the premium for insuring 500 farmers cost about 77,000 dollars.

However, amidst an El Nino-induced drought that affected not only Zambia but the entire Southern African region, some farmers in the project were riled that the index insurance did not trigger a pay-out. This was due to the fact that the satellite data showed that there was rainfall during the agreed window period.

But for farmers, understanding such scientific technicalities proved difficult, a point that Pemba District Commissioner, Reginald Mugoba, highlighted during one of the District Development Coordinating Committee (DDCC) meetings.

“I think it is important to be clear with farmers from the beginning,” he said. “New concepts are always difficult for our farmers to understand, especially if they involve scientific interpretations,” he added, pointing out the need to avoid ambiguity for such projects to be successful in rural communities.