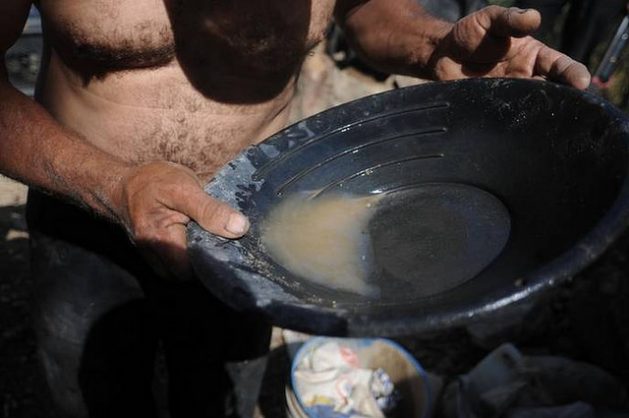 Artisanal gold mining in Latin America uses mercury, a practice that should be modified in countries that have ratified the international Minamata Convention for the control of this toxic metal. Credit: Thelma Mejía/IPS

MEXICO CITY, Sep 26 2017 (IPS) - For environmentalist Patricia Ruiz the only word that comes to mind is “devastating,” when describing the situation of mercury mining in her home state of Querétaro in central Mexico.

“There are a large number of pits (from which the mercury is extracted), and there are the tailing ponds containing mining waste, all of which drains into the rivers. These are people who don’t have other options, they risk their health, their family genetics. There are many people involved, who have no alternative employment,” said Ruiz, the founder of the Sierra Gorda Ecological Group.

Her non-governmental organisation is dedicated to protecting the 383,567-hectare Sierra Gorda Biosphere Reserve, which is home to a rich ecosystem as well as100,000 people, distributed in five municipalities and 638 communities.

Querétaro and the northern state of Zacatecas have become major producers of mercury, the extraction of which is mainly in private hands and practiced without a license. The mercury is mostly exported to countries such as Bolivia and Colombia, where it is used mainly in the artisanal mining of gold.

The rise in production in Mexico was a consequence of export bans in the United States and the European Union since 2011, which prompted Mexico to step in to fill the gap.

Replacing mercury in artisanal mining is a challenge that Mexico is now facing in order to comply with the Minamata Convention, which entered into force on Aug. 16, and which will celebrate its first meeting of the Conference of the Parties in Geneva from Sept. 24-29.

The treaty prohibits new mercury mines and stipulates the phasing out of existing mines, the reduction of mercury use in a number of products and processes, the promotion of measures to curb emissions into the atmosphere and seepage into the soil and water, the regulation of artisanal and small-scale gold mining and proper management of contaminated sites.

The “Mexican Mercury Market Report”, produced in 2011 by the Commission for Environmental Cooperation, estimated that there are nearly 27 million tonnes of mercury waste accumulated in mines and the chlor-alkali industry.

Primary mercury mines account for 43 percent of these deposits – some 11.75 million tons – while the secondary production of old deposits of mine waste or tailings in Zacatecas contribute another 14.9 million, and the chlor-alkali industry accounts for 240,000 tonnes in two plants.

A report by the governmental National Institute of Ecology and Climate Change (INECC), obtained by IPS, shows that eight of Mexico’s 31 states have mercury mines that feed the national trade in dental fillings, lamps and raw materials for artisanal gold mining, as well as the increasing exports.

Some 300 artisanal mercury mines operate in Querétaro, while extraction from tailings ponds is attractive due the value of amalgamated silver. Mercury mining in Querétaro is concentrated in three municipalities.

In that state, two regions, with a total of nine mining districts, contain mercury. Between 1995 and 2016, the state government supported three projects with potential mercury deposits.

In Zacatecas, four of 17 mining regions have mercury and six of 116 mining projects involve mercury exploration and exploitation.

Artisanal gold mining is active in 10 states, and more than 3,000 people work in this activity.

Mercury is obtained from cinnabar ore, which is crushed and fed into a furnace or kiln to be heated, generating toxic mercury vapor with toxic properties.

According to the World Health Organization (WHO), the main effect of exposure to fish and seafood contaminated by mercury in fetuses and infants is impaired neurological development. Mercury, which has
neurotoxic characteristics, accumulates in the body.

In Latin America, Bolivia, Brazil, Costa Rica, Ecuador, Honduras, Jamaica, Mexico, Nicaragua, Panama, Peru and Uruguay have already ratified the Convention. But only Brazil has submitted its report to the secretariat of the mercury control treaty, as only nine other countries around the world and the European Union have done.

Measures to curb the production of mercury in other countries have turned Mexico into the second largest supplier in the world, after Indonesia. In July this country exported 75 tons to Bolivia and 9.55 to Chile, while sporadic sales were reported to Argentina, Colombia, Cuba, Nicaragua, Panama and Paraguay.

In 2016, Bolivia was also the top destination, with 193 tons, while Colombia imported 41.5, even though it had banned the use of mercury in artisanal mining in 2013.

The coordinator of the non-governmental Center for Analysis and Action on Toxics and their Alternatives (CAATA), Fernando Bejarano, said that Mexico saw the upturn in mercury mining coming and did not take action.

“This is a social problem linked to poverty and we must treat it according to that perspective, and not only as an environmental issue. But there is no clear multisectoral approach. In the coming years production may grow even further,” the expert told IPS.

In his view, “Mexico lacks a clear policy on the handling of hazardous substances and people continue to be exposed to them.”

A report by the Federal Attorney General’s Office of Environmental Protection (Profepa), to which IPS had access, states that mining is carried out with no environmental damage mitigation or prevention of health effects.

Mines, the report adds, lack the infrastructure to prevent polluting emissions from the furnaces, and there is inadequate management of mining waste, which pollute water and soil.

Their “2015 studies on air quality and its impact in the central region of Mexico”, obtained by IPS, which assessed emissions from 83 mines, concluded that there is a risk of toxicity for workers in the mining area of Querétaro and the surrounding population, where it found high concentrations of the mineral.

INECC this year detected high concentrations of mercury in the basement of a shopping center in Zacatecas, where products for sale are stored.

For activist Patricia Ruiz, winner of at least five prizes in ecology, Mexico should work on a plan based on people´s needs.

“The semi-desert (of the region) offers possibilities. It can provide employment for many years and the mines would be shut down. It requires financial resources to be able to pay temporary employment and cover the pits,” she said.

Mexico, which anticipates designing a plan of action to modify artisanal gold mining, will have to adapt its legal framework to the Minamata Convention. It has already identified four sites and 15 communities contaminated with mercury.

“The state and municipal actors must be informed about the risks. There must be an orderly plan of transition. It is a national responsibility, we should not just wait for international resources to come,” Bejarano said.

In Geneva, CAATA and other NGOs will determine the presence of mercury in body creams from places such as Quéretaro.

Mexico is waiting for approval by the Global Environment Facility to finance a seven million dollar environmental risk reduction initiative in mining in Querétaro. At the end of the year, the government will complete an assessment of the country’s situation in this regard.