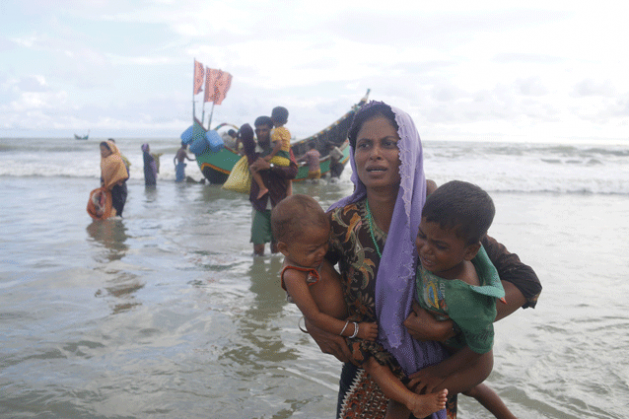 COX'S BAZAR, Bangladesh, Sep 18 2017 (IPS) - Forsaken and driven out by their home country Myanmar, tens of thousands of Rohingyas are struggling to survive in Bangladesh’s border districts amid scarcities of food, clean water and medical care, mostly for children and elderly people.

In a desperate flight to escape brutal military persecution, men, women and children in the thousands have walked for miles, travelled on rickety fishing boats or waded through the Naf — the river that divides Bangladesh and Myanmar.

“It was a nightmare…the crackle of bullets and burning flames still haunt me.” -- Rebeka Begum

“I saw my houses being burned down and left behind all our belongings… my father was killed in front of us,” 12-year-old Nurul Islam told IPS as he reached Teknaf border in Bangladesh on Sep. 13. “In a bid to escape along with my mother and a younger brother, we walked almost a week to reach Bangladesh following a trail of people streaming out of Rakhine villages for cover.”

Islam is one of over 400,000 Rohingyas who have made the defiant and arduous journey to neighbouring Bangladesh in the past three weeks. Many of them were shot dead, drowned in the river or blown up in landmines placed in their path of escape.

Yet every hour, the number of new arrivals is rising. There seems no end to the steady flow of Rohingyas carrying sacks of belongings – whatever they could save from burning – or children on their shoulders or laps, or carrying weaker elderly people on their back or bamboo yokes. As they arrived, they were devastated, but happy to find themselves still alive – at least for the time being. 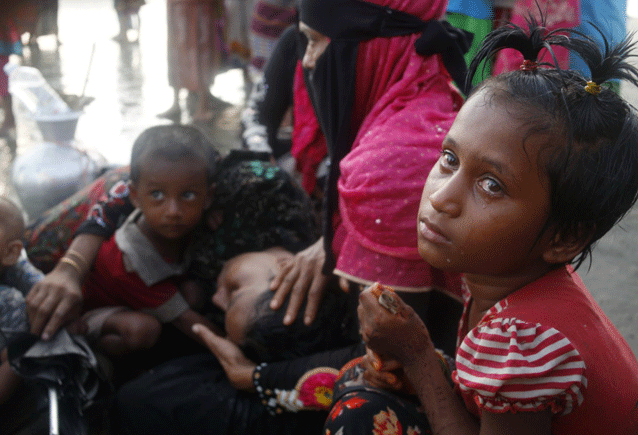 But aid groups, both local and international, warn that this already overpopulated, impoverished South Asian nation is now overwhelmed by the sudden influx of refugees.

They said lack of food and medical aid are leading to a humanitarian catastrophe as starving or half-fed people arrive already suffering from malnutrition, and an inadequate safe water supply and poor sanitation facilities could cause breakouts of waterborne diseases.

The UN refugee agency UNHCR and International Organization for Migration (IOM) held a joint press conference in Dhaka on Thursday where officials estimated the number of fleeing Rohingyas might reach one million as their influx continued.

The latest round of Rohingya crisis unfolded as Myanmar’s army conducted a brutal crackdown on “Rohingya militants” who attacked a security outpost killing solders in the last week of August. Though not independently verified, according to eyewitness accounts of fleeing Rohingyas, the Myanmar army torched village after village, the homes of ethnic Rohingya Muslims, in reprisal, killing hundreds.

Myanmar authorities denied the allegations, but satellite images released by a number of international rights groups corroborated the claim made by the Rohingya refugees.

In addition to arson, the Myanmar soldiers were also accused of raping Rohingya women.

Local people in Teknaf also said they saw huge fires and black smoke billowing across the Naf River from the Myanmar side several times.

The UN refugee chief called the situation a “textbook example of ethnic cleansing” in Rakhine state in Myanmar.

It was not the first time the Rohingyas, mostly Muslims, have been targeted and faced discrimination in their hometowns of Buddhist-majority Myanmar, where they lived for centuries. In the past few decades, they have been stripped of citizenship, denied basic rights and made stateless, leading the UN to describe them as “the most persecuted people on earth”.

As the Rohingyas crossed finally the border after their death-defying trudge to Bangladesh’s southeast districts of Cox’s Bazar and Bandarban, many had no safe shelter, food or drinking water in a country of 160 million people, though Bangladesh Prime Minister Sheikh Hasina promised to accommodate all on humanitarian grounds.

Though many countries started sending aid and others made promises, many Rohingya refugees were still starving or passing days half-fed. Those who were strong enough to jostle fared the best as local volunteers distributed limited amounts of food and water.

In many places when trucks carrying aid were spotted, starving people blocked them and desperately tried to grab food. The distribution process turned risky as the inexperienced volunteers threw food to the crowd of refugees from the trucks.

As they scuffled for food and water, many people were injured in stampedes or caned by the people given responsibility to discipline the refugees crowding for aid.

Thousands of Rohingyas, mostly women and children, took refuge on the sides of roads or other empty spaces under open sky. Some of those who were lucky could manage a sheet of polythene to save them from heavy monsoon rains that flooded a third of Bangladesh in August.

The Bangladesh government has already demarcated an area in Cox’s Bazar to build new refugee camps and started mandatory registration of Rohingyas before giving them official status as refugees.

Rebeka Begum, who had just alighted from a boat, was searching fruitlessly for food for her child. “We’re now paupers as we’ve left behind everything in Myanmar to save ourselves from the wrath of military,” she said, horror still sounding in her voice. 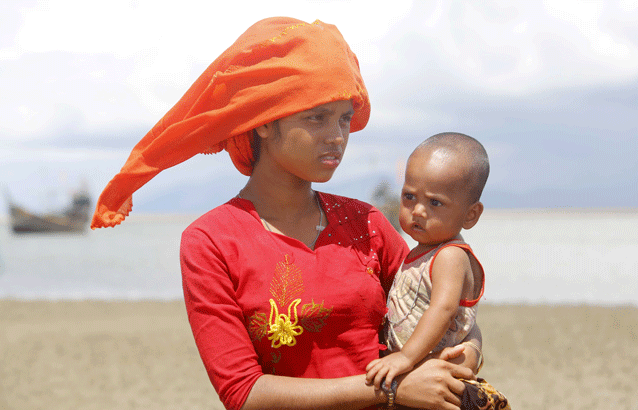 A Rohingya woman Rebeka Begum with her child poses for a photo at Shahparir Dip, Teknaf, Bangladesh. Credit: IPS

“It was a nightmare…the crackle of bullets and burning flames still haunt me,” Rebeka Begum said.

Amena Begum was collecting filthy water from a canal for her children to drink as she found no other options. “I urgently need water for my children… what can I do now?” she asked.

Local people said that since there were not enough toilets for so many people, thousands of refugees were defecating on the roadsides or on the banks of canals, from which they were also collecting water for drinking and other purposes.

UNICEF said over 200,000 Rohingya children were at risk and hundreds of unaccompanied Rohingya children, separated from both parents and relatives in the ongoing violence in Rakhine, were in Cox’s Bazar and looking for family members. Many of these children are traumatised by terrifying memories of murders and arson in homes and their experience on path while fleeing.

Save the Children in Bangladesh said in a statement on Sept 17 that a shortage of food, shelter, water and basic hygiene support might cause another catastrophe.

“Apart from diarrhoea and skin diseases, different types of communicable diseases might spread fast here,” warned Dr. Ibrahim Molla, adding that the shortage of space the refugees had for living and poor hygiene support was to blame.

Molla said the group was running a medical camp in Teknaf, and had obtained government permission to open a makeshift hospital for the refugees.

All local hospitals in Cox’s Bazar and the port city of Chittagong were teeming with Rohingya patients – many with bullet wounds and some with injuries from landmines.

Mohammad Alam was looking for medical support for his feverish son as he arrived on a boat crossing the Naf. He was advised by local people to walk a few kilometres more to find a hospital.

Alam, a farmer by profession, started off again in search of the hospital and a refugee camp.

“I’m lucky, as I’ve survived along with all my family members,” Amam said. But his pale and weary face denoted a grim and uncertain future, like his fellow Rohingyas who had no idea when or if they would ever be able to return home despite the global pressure on Myanmar to bring an end to Rohingyas’ persecution.