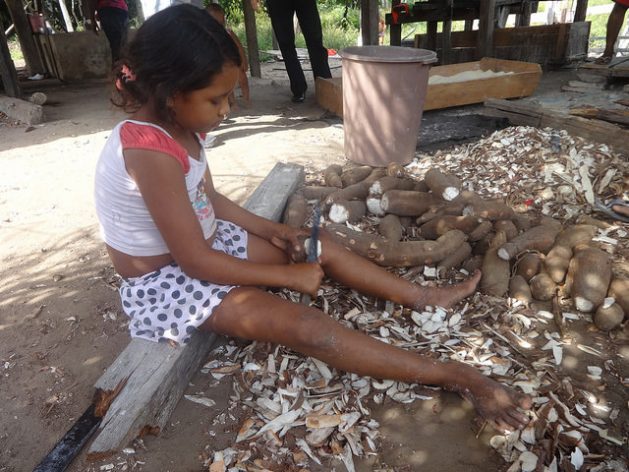 A little girl peels manioc to make flour in Acará, in the state of Pará, in the northeast of Brazil's Amazon region. In the rural sectors of Brazil, it is a deeply-rooted custom for children to help with family farming, on the grounds of passing on knowledge. Credit: Fabiana Frayssinet / IPS

RIO DE JANEIRO, May 14 2018 (IPS) - Child labour has been substantially reduced in Latin America, but 5.7 million children below the legal minimum age are still working and a large proportion of them work in precarious, high-risk conditions or are unpaid, which constitute new forms of slave labour.

For the International Labor Organisation (ILO) child labour includes children working before they reach the minimum legal age or carrying out work that should be prohibited, according to Convention 182 on the Worst Forms of Child Labour, in force since 2000.

The vast majority of these children work in agriculture, but many also work in high-risk sectors such as mining, domestic labour, fireworks manufacturing and fishing.

"They work in truly inhuman, overheated spaces. They are not given even the minimum safety measures, such as facemasks so they do not inhale lint from jeans, or gloves for tearing seams, which hurts their fingers. The repetitive work of cutting fabric with large scissors hurts their hands." -- Joaquín Cortez

In Paraguay, a country of 7.2 million people, the tradition of “criadazgo” goes back to colonial times and persists despite laws that prohibit child labour, lawyer Cecilia Gadea told IPS.

“Very poor families, usually from rural areas, are forced to give their under-age children to relatives or families who are financially better off, who take charge of their upbringing, education and food,” a practice known as “criadazgo”, she explained.

“But it is not for free or out of solidarity, but in exchange for the children carrying out domestic work,” said Gadea, who is doing research on the topic for her master’s thesis at the Latin American Faculty of Social Sciences (Flacso).

In Paraguay, the country in South America with the highest poverty rate and one of the 10 most unequal countries in the world, some 47,000 children (2.5 percent of the child population) are in a situation of criadazgo, according to the non-governmental organisation Global Infancia. Of these, 81.6 percent are girls.

“People do not want to accept it, but it is one of the worst forms of work. It is not a solidarity-based action as people try to present it; it is a form of child labour and exploitation. It is also a kind of slavery because children are subjected to carrying out forced tasks not appropriate to their age, they are punished, and many may not even be allowed to leave the house,” said Gadea.

According to the researcher, most of the so-called “criaditos” (little servants), ranging in age from five to 15, are “subjected to forced labour, domestic tasks for many hours and without rest; they are mistreated, abused, punished and exploited; they are not allowed to go to school; they live in precarious conditions; they are not fed properly; and they do not receive medical care, among other limitations.”

Only a minority of them “are not abused or exposed to danger, go to school, play, are well cared for, and all things considered, lead a good life,” she said.

The origins of criadazgo lay in the hazardous forced labour to which the Spanish colonisers subjected indigenous women and children, said Gadea.

Paraguay was devastated by two wars, one in the second half of the nineteenth century and another in the first half of the twentieth century, its male population decimated, and was left in the hands of women, children and the elderly, who had to rebuild the country.

“The widespread poverty forced mothers to give their children to families with better incomes, so they could take charge of their upbringing, education and food, while the mothers worked to survive and rebuild a country left in ruins,” she said.

The practice continues, according to Gadea, because of inequality and poverty. Large low-income families “find the only solution is handing over one or more of their children for them to be provided with better living conditions.”

On the other hand, “there are people who need these ‘criados’ to work as domestics, because they are cheap labour, since they only require a little food and a place to sleep,” she said.

Campaigns to combat this tradition that is deeply-rooted in Paraguayan society face resistance from many sectors, including Congress.

It is a “hidden and invisible practice that is hardly talked about. Many defend it because they consider it an act of solidarity, a means of survival for children living in extreme poverty,” she added.

The case of Mexico

Mexico is another of the Latin American countries with the highest levels of child labour exploitation, in sectors such as agriculture, or maquiladoras – for-export assembly plants. 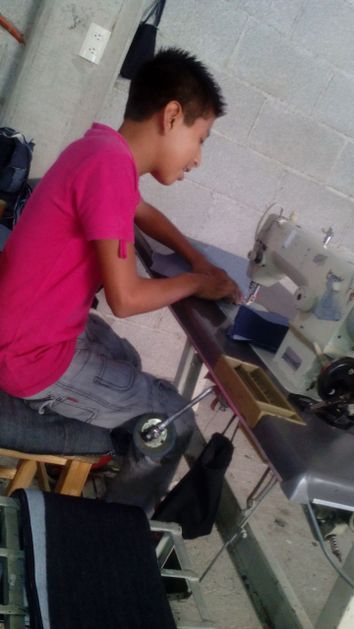 A boy works in a maquiladora textile plant in the state of Puebla, in central Mexico. Credit: Courtesy of Joaquín Cortez

In Mexico, with a population of 122 million people, there are more than 2.5 million children working – 8.4 percent of the child population. The problem is concentrated in the states of Colima, Guerrero and Puebla, explains Joaquín Cortez, author of the study “Modern Child Slavery: Cases of Child Labour Exploitation in the Maquiladoras.”

Cortez researched in particular the textile maquilas of the central state of Puebla.

Children there “work in extremely precarious conditions, in addition to working more than 48 hours a week, receiving wages of between 29 and 40 dollars per week. To withstand the workloads they often inhale drugs like marijuana or crack,” the researcher from the National Autonomous University of Mexico (UNAM) told IPS.

In some maquilas “strategies have been used to evade accountability. As in the case of working children who, in the face of labour inspections, are hidden in the bathrooms between the bundles of jeans,” said Cortez.

“They work in truly inhuman, overheated spaces. They are not given even the minimum safety measures, such as facemasks so they do not inhale lint from jeans, or gloves for tearing seams, which hurts their fingers. The repetitive work of cutting fabric with large scissors hurts their hands,” he said.

In short, Cortez noted that “they are more at risk because they work as much as or more than an adult and earn less.”

At times, these children “are verbally assaulted for not rushing to get the production that the manager of the maquiladoras needs. Girls are also often sexually harassed by their co-workers,” he added.

Cortez attributes the causes of this child labour, “in addition to being cheap labour for the owners of small and large maquiladoras,” to inequality and poverty and to poor social organisation, despite attempts at resistance.

The situation in Brazil

In Brazil, a study by the Brazilian Institute of Geography and Statistics (IBGE), published in 2017, found that of the 1.8 million children between the ages of five and 17 who work, 54.4 percent do so illegally.

In this South American country of 208 million people, the laws allow children to work from the age of 14 but only as apprentices, while adolescents between the ages of 16 and 18 cannot work the night shift and cannot work in dangerous or unhealthy conditions.

One of the authors of the report, economist Flávia Vinhaes, clarified to IPS that although child labor does not always occur in conditions of slavery or semi-slavery, “children between the ages of five and 13 should not work under any conditions, as it is considered child labour.”

Among those employed at that age, 74 percent did not receive remuneration.

Another indicator revealed that 73 percent of these children worked as “assistants”, helping family members in their productive activities.

“Both domestic tasks and care work make up a broad definition of child labor that may be in conflict with formal education as well as being carried out over long hours or under dangerous conditions,” Vinhaes said.

The research showed that 47.6 percent of workers between the ages of five and 13 are in the agricultural sector, part of a deep-rooted custom.

“In traditional agriculture, children and adolescents perform work under the supervision of their parents as part of the socialisation process, or as a means of passing on traditionally acquired techniques from parents to children,” she said.

“This situation should not be confused with that of children who are forced to work regularly or day after day in exchange for some kind of remuneration or just to help their families, with the resulting damage to their educational and social development,” she said. “There is a fine line between helping and working in a way that is cultural and educational.”