Ana Paula Gomes de Oliveira, from the Mothers of Manguinhos movement, an activist group comprised of women who have lost their children to police violence 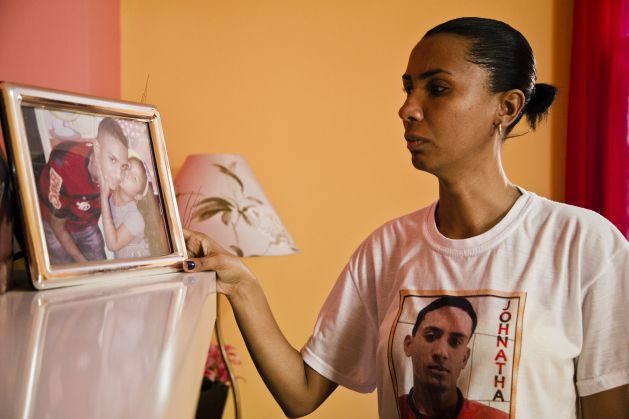 May 11 2018 (IPS) - On May 14, 2014, my son, Johnatha de Oliveira Lima, was killed by a police officer from the Pacifying Police Unit in Manguinhos, in Rio de Janeiro. Soon after my son’s death, I got a phone call from a woman who identified herself as Marielle. I didn’t know who she was.

Back then, she wasn’t the city councilwoman elected with the fifth biggest share of the vote in Rio, not yet. But she worked on the Human Rights Commission in the state legislature, where she reached out to people who’d lost their children, siblings, or parents.

It is unacceptable that Marielle’s life has come to an end in such a cruel way, and that whoever was responsible has still not been brought to justice.

I knew that there was a Human Rights Commission because I’d seen it on television. On the same day that Johnatha died, she called me and said that she was there to help any way she could. I remember it perfectly. This is what she told me:

“Hi, Ana Paula, my name’s Marielle. You don’t know me, I work on the Human Rights Commission, but I want to tell you that, first of all, I’m here for you as a woman, and as the mother that I am. I can’t even imagine the pain you’re feeling. I wanted to give you my condolences, all my support, and I wish I could be there with you now and give you a hug personally. I’m sure I’ll get a chance to do just that.”

She kept on reaching out to me, to my family, my sister, and she invited us to the commission, where I met her for the first time. Here in Manguinhos, she was at the demonstration a year after Johnatha’s death, and then at cultural events.

Marielle was just like us. She came over to my house with the commission, and I got my family together to meet them. Our connection only grew stronger, because she was always there for us.

Sometimes through phone calls, many times by showing up at hearings, and not just for my son. I’d see her at demonstrations outside court, supporting other families at hearings, alongside other mothers whose sons had been killed, and she’d often come over and see us, give us a hug and a word of comfort, of strength. Whenever we saw her she wanted to know how my family was, and she’d talk about my son. She brought an air of peace, and she was always so warm.

When I heard that Marielle had been killed, I was in Jamaica. Amnesty International had invited me to take part in an event with relatives of people killed by police in Jamaica, Brazil and the USA. We went to share our stories and draw strength from one another.

On the night of March 14, after an intense day of activities, I was too tired to go out. I stayed in the hotel, looking over photos of my son and the protests on my cellphone. That day marked three years and 10 months since my son was killed. I reflected about everything that happened after his death, and everything that had brought me to that place, Jamaica. A place so far away from my daughter, my family, and my friends.

When I thought about it, I understood that if I was there, it was for a reason. So I pulled up a picture of my son and I started writing. As if I were talking to him: “Son, your mom loves you. I’m never going to forget you.” Just when I’d finished posting the photo with that caption on social media, my phone started going off. It was Denize, a mother I met through Marielle and the Human Rights Commission. We had grown close because of the terrible reality that we shared: her son had also been killed by the police.

It was Denize who gave me the news that Marielle had been shot dead. I was overwhelmed. It was like losing someone from my family, a close friend. I knew that whenever I called, day or night, she would pick up.

It is unacceptable that Marielle’s life has come to an end in such a cruel way, and that whoever was responsible has still not been brought to justice.

Marielle was always there for all of us, a tireless defender of our rights. And now we, the mothers she always gave a hand to when we needed it, will always be there for her and for those in her life. Our voices will not rest and we will keep fighting for Marielle until justice is delivered. Demand answers from the Brazilian authorities by signing Amnesty International’s petition.  As we say in Brazil, Marielle is still present, today and always!