DAVID E. BLOOM is the Clarence James Gamble Professor of Economics and Demography, DANIEL CADARETTE is a research assistant, and JP SEVILLA is a research associate, all at Harvard University’s T.H. Chan School of Public Health.

WASHINGTON DC, Jul 3 2018 (IPS) - Infectious diseases and associated mortality have abated, but they remain a significant threat throughout the world. 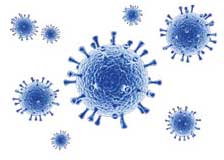 Some infectious diseases, such as tuberculosis and malaria, are endemic to many areas, imposing substantial but steady burdens. Others, such as influenza, fluctuate in pervasiveness and intensity, wreaking havoc in developing and developed economies alike when an outbreak (a sharp increase in prevalence in a relatively limited area or population), an epidemic (a sharp increase covering a larger area or population), or a pandemic (an epidemic covering multiple countries or continents) occurs.

The health risks of outbreaks and epidemics—and the fear and panic that accompany them—map to various economic risks.

First, and perhaps most obviously, there are the costs to the health system, both public and private, of medical treatment of the infected and of outbreak control. A sizable outbreak can overwhelm the health system, limiting the capacity to deal with routine health issues and compounding the problem.

Beyond shocks to the health sector, epidemics force both the ill and their caretakers to miss work or be less effective at their jobs, driving down and disrupting productivity.

Fear of infection can result in social distancing or closed schools, enterprises, commercial establishments, transportation, and public services—all of which disrupt economic and other socially valuable activity.

Concern over the spread of even a relatively contained outbreak can lead to decreased trade. For example, a ban imposed by the European Union on exports of British beef lasted 10 years following identification of a mad cow disease outbreak in the United Kingdom, despite relatively low transmission to humans.

Travel and tourism to regions affected by outbreaks are also likely to decline. Some long-running epidemics, such as HIV and malaria, deter foreign direct investment as well.

The economic risks of epidemics are not trivial. Victoria Fan, Dean Jamison, and Lawrence Summers recently estimated the expected yearly cost of pandemic influenza at roughly $500 billion (0.6 percent of global income), including both lost income and the intrinsic cost of elevated mortality.

Even when the health impact of an outbreak is relatively limited, its economic consequences can quickly become magnified. Liberia, for example, saw GDP growth decline 8 percentage points from 2013 to 2014 during the recent Ebola outbreak in west Africa, even as the country’s overall death rate fell over the same period.

The consequences of outbreaks and epidemics are not distributed equally throughout the economy. Some sectors may even benefit financially, while others will suffer disproportionately.

Pharmaceutical companies that produce vaccines, antibiotics, or other products needed for outbreak response are potential beneficiaries. Health and life insurance companies are likely to bear heavy costs, at least in the short term, as are livestock producers in the event of an outbreak linked to animals.

Vulnerable populations, particularly the poor, are likely to suffer disproportionately, as they may have less access to health care and lower savings to protect against financial catastrophe.

Economic policymakers are accustomed to managing various forms of risk, such as trade imbalances, exchange rate movements, and changes in market interest rates. There are also risks that are not strictly economic in origin.

Armed conflict represents one such example; natural disasters are another. We can think about the economic disruption caused by outbreaks and epidemics along these same lines. As with other forms of risk, the economic risk of health shocks can be managed with policies that reduce their likelihood and that position countries to respond swiftly when they do occur.

Several factors complicate the management of epidemic risk. Diseases can be transmitted rapidly, both within and across countries, which means that timely responses to initial outbreaks are essential. In addition to being exacerbated by globalization, epidemic potential is elevated by the twin phenomena of climate change and urbanization.

Climate change is expanding the habitats of various common disease vectors, such as the Aedes aegypti mosquito, which can spread dengue, chikungunya, Zika, and yellow fever. Urbanization means more humans live in close quarters, amplifying the transmissibility of contagious disease.

In rapidly urbanizing areas, the growth of slums forces more people to live in conditions with substandard sanitation and poor access to clean water, compounding the problem.

Perhaps the greatest challenge is the formidable array of possible causes of epidemics, including pathogens that are currently unknown. In December 2015 the World Health Organization (WHO) published a list of epidemic-potential disease priorities requiring urgent research and development (R&D) attention.

That list has since been updated twice, most recently in February 2018 (see table). 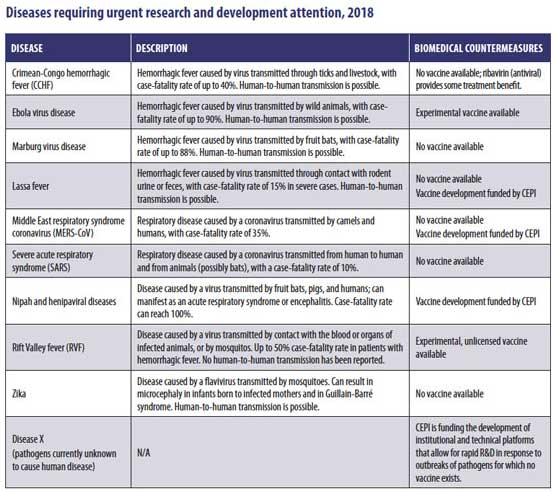 Beyond this list, diseases that are currently endemic in some areas but could spread without proper control represent another category of threat. Tuberculosis, malaria, and dengue are examples, as is HIV.

Pathogens resistant to antimicrobials are increasing in prevalence throughout the world, and widespread pan-drug-resistant superbugs could pose yet another hazard. Rapid transmission of resistant pathogens is unlikely to occur in the same way it may with pandemic threats, but the proliferation of superbugs is making the world an increasingly risky place.

Epidemic risk is complex, but policymakers have tools they can deploy in response. Some tools minimize the likelihood of outbreaks or limit their proliferation. Others attempt to minimize the health impact of outbreaks that cannot be prevented or immediately contained. Still others aim to minimize the economic impact.

Investing in improved sanitation, provisioning of clean water, and better urban infrastructure can reduce the frequency of human contact with pathogenic agents.

Building strong health systems and supporting proper nutrition will help ensure good baseline levels of health, making people less susceptible to infection. Of course, strengthening basic systems, services, and infrastructure becomes easier with economic growth and development; however, policies to protect spending in these areas even when budgets are constrained can help safeguard developing economies from major health shocks that could significantly impinge upon human capital and impede economic growth.

Investment in reliable disease surveillance in both human and animal populations is also critical. Within formal global surveillance systems, it may be beneficial to develop incentives for reporting suspected outbreaks, as countries may reasonably fear the effects of such reporting on trade, tourism, and other economic outcomes.

The SARS epidemic, for instance, might have been better contained if China had reported the initial outbreak to the WHO earlier.

Informal surveillance systems, such as ProMED and HealthMap, which aggregate information from official surveillance reports, media reports, online discussions and summaries, and eyewitness observations, can also help national health systems and international responders get ahead of the epidemiological curve during the early stages of an outbreak.

Collaborations for monitoring epidemic readiness at the national level, such as the Global Health Security Agenda and the Joint External Evaluation Alliance, provide information national governments can use to bolster their planned outbreak responses.

Additional research into which pathogens are likely to spread and have a big impact would be worthwhile.

Countries should be ready to take initial measures to limit the spread of disease when an outbreak does occur. Historically, ships were quarantined in port during plague epidemics to prevent the spread of the disease to coastal cities. In the case of highly virulent and highly transmissible diseases, quarantines may still be necessary, although they can inspire concerns about human rights.

Likewise, it may be necessary to ration biomedical countermeasures if supplies are limited. Countries should decide in advance if they will prioritize first responders and other key personnel or favor vulnerable groups, such as children and the elderly; different strategies may be appropriate for different diseases.

There is a significant market failure when it comes to vaccines against individual low-probability pathogens that collectively are likely to cause epidemics. Given the low probability that any single vaccine of this type will be needed, high R&D costs, and delayed returns, pharmaceutical companies hesitate to invest in their development. The profit-seeking interest does not align well with the social interest of minimizing the risk posed by these diseases in the aggregate.

Farsighted international collaboration can overcome this market failure—for example, the Coalition for Epidemic Preparedness Innovations, which is supported by the governments of Australia, Belgium, Canada, Ethiopia, India, Japan, Germany, and Norway, as well as the European Commission and various nongovernmental funders.

Its goals include advancing candidate vaccines against specific low-probability, high-severity pathogens through proof of concept to enable rapid clinical testing and scale-up in the event of outbreaks of those pathogens.

It also aims to fund development of institutional and technical platforms to speed R&D in response to outbreaks for which there are no vaccines. Similar funding models could support the development of a universal influenza vaccine.

Of course, new vaccines will be less useful if governments do not ensure that at-risk populations have access to them. Assured access could also motivate developing economies to participate actively in the vaccine R&D process.

In 2007 Indonesia withheld samples of the H5N1 influenza virus from the WHO to protest the fact that companies in wealthy countries often use samples freely provided by developing economies to produce vaccines and other countermeasures without returning any profit or other special benefits to the donors.

Beyond funding R&D, international collaboration could boost epidemic preparedness by supporting centralized stockpiling of vaccines and drugs that can be deployed where they are most needed. Such collaboration has obvious advantages over a system in which each country stockpiles its own biomedical countermeasures.

While some countries are more likely to need these countermeasures than others, the global public good of living without fear of pandemics should motivate cooperation and cost sharing.

In addition, wealthy countries at relatively low risk of suffering massive health impacts from most epidemics could suffer disproportionately large economic losses—even from faraway epidemics—given the size of their economies and reliance on foreign trade.

If outbreaks do occur and impose a substantial health burden, there are tools to limit the risk of economic catastrophe. As with natural disasters, insurance can help distribute the economic burden across sectors of the economy and regions.

Prioritizing personnel such as health care workers, members of the military, and public safety employees for distribution of biomedical countermeasures during an outbreak can help protect critical economic resources.

We cannot predict which pathogen will spur the next major epidemic, where that epidemic will originate, or how dire the consequences will be. But as long as humans and infectious pathogens coexist, outbreaks and epidemics are certain to occur and to impose significant costs.

The upside is that we can take proactive steps to manage the risk of epidemics and mitigate their impact. Concerted action now at the local, national, and multinational levels can go a long way toward protecting our collective well-being in the future.

Opinions expressed in articles and other materials are those of the authors; they do not necessarily reflect IMF policy.