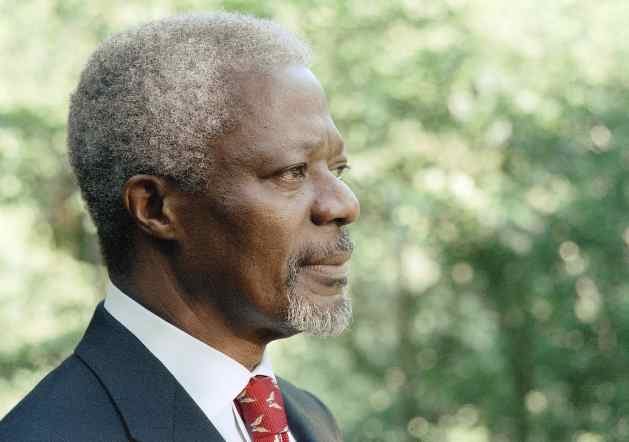 UNITED NATIONS, Aug 20 2018 (IPS) - The Secretary-General of the United Nations, who is  a creature of member states, rarely challenges or defies his creators. But Kofi Annan, who died last week at the age of 80, did both. Surprisingly, he lived to tell the tale– but paid an unfairly heavy price after being hounded by the United States.

When the US invaded Iraq in March 2003, he described the invasion as “illegal” because it did not have the blessings of the 15-member UN Security Council (UNSC), the only institution in the world body with the power to declare war and peace.

But the administration of President George W. Bush went after him for challenging its decision to unilaterally declare war against Iraq: an attack by one member state against another for no legally-justifiable reason.

Subsequently, Annan came under heavy fire for misperceived lapses in the implementation of the “Oil-for-Food” programme which was aimed at alleviating the sufferings of millions of Iraqis weighed down by UN sanctions.

Ian Williams, author of UNtold: The Real Story of the United Nations in Peace and War, told IPS: “While I am heartened by the outpouring of appreciation for Kofi Annan, I can’t help but notice the contrast with the sound of silence when the Rupert Murdoch press and its followers had his back to the wall with the spurious Oil-for-Food crisis they had manufactured.”

All too many stood back and stayed silent as Annan spent long months under constant sniper fire, he recounted.

While few now remember the Oil for Food crisis, said Williams, it was billed at the time as the “greatest financial scandal” in history.

He said the so-called crisis “was a savage assault on Kofi’s greatest asset– and his perceptible integrity took a severe personal toll, as people who should have known better kept their silence.”

“It was in fact one of the greatest “fake news” concoctions in history, almost up there with Iraqi WMDs. That was no coincidence since many of the sources for both were the same,” said Williams, a senior analyst who has written for newspapers and magazines around the world, including the Australian, The Independent, New York Observer, The Financial Times and The Guardian.

“While I am heartened by the outpouring of appreciation for Kofi Annan, I can’t help but notice the contrast with the sound of silence when the Rupert Murdoch press and its followers had his back to the wall with the spurious Oil-for-Food crisis they had manufactured.”
Annan also virtually challenged the General Assembly which continued to offer its podium to political leaders who had come to power by undemocratic means or via military coups.

In 2004, when the Organization of African Unity (OAU), the predecessor of the present African Union (AU), barred coup leaders from participating in African summits, Annan singled it out as a future model to punish military dictators worldwide.

Annan went one step further and said he was hopeful that one day the UN General Assembly, the highest policy making body in the Organization, would follow in the footsteps of the OAU and bar leaders of military governments from addressing the General Assembly.

Annan’s proposal was a historic first. But it never came to pass in an institution where member states, not the Secretary-General, rule the roost.

The outspoken Annan, a national of Ghana, also said that “billions of dollars of public funds continue to be stashed away by some African leaders — even while roads are crumbling, health systems are failing, school children have neither books nor desks nor teachers, and phones do not work.”

He also lashed out at African leaders who overthrow democratic regimes to grab power by military means.

He was without doubt the “best Secretary-General the UN was privileged to have, after Dag Hammarskjold,” and steered the global body into the 21st century, with a vision and dedication sadly unmatched by the global leaders of the day, said Dhanapala.

“Kofi was dedicated to the cause of disarmament and re-established the Department for Disarmament Affairs in 1998 appointing me as its head, as part of his UN reforms. It was an honour to serve in his Senior Management Team for five eventful years and implement his policies for the reform of the UN.  His legacy will endure and be an inspiration,” he declared.

“I had known Kofi before he became Secretary-General. He remained unassuming, dignified and sincere in his commitment to peace,” said Dhanapala, a former Sri Lankan envoy to the United States.

Asked about Annan’s criticism of the American invasion of Iraq, he said “the USA went after him for saying that, and harassed him”.

Annan’s public declaration of the illegality of the US invasion provoked negative reactions both from the White House and from U.S. politicians.

“If Kofi had his way, [Iraqi President] Saddam Hussein would still be in power,” said Senator John Cornyn, a member of the U.S. Senate Armed Services Committee.

Williams told IPS that Annan was a person of integrity, and recognized his own failings, as in the Balkans and Rwanda, and tried to do something about them, commissioning reports that implicated him.

“With his experience in the UN machinery, he could have put the blame elsewhere but he accepted his share and that gave him the standing to represent the UN.”

People sometimes say that he was not outspoken enough, not loud enough, but that was actually a strength. When Annan spoke, said Williams, it was not just a trite soundbite because “he said what had to be said even it was sometimes unpopular.”

When Annan came back from negotiating with Iraqi President Saddam Hussein and said it was a testament to the efficacy of diplomacy, not enough people listened to his corollary – when backed with the threat of force.

That posture of dignity, noted Williams, allowed him to steer the landmark Responsibility to Protect (R2P) resolution through the sixtieth anniversary summit and it is still a landmark even if many of those who did not have the political courage to oppose it at the summit have done so much to frustrate it since.

“Annan was no mere bureaucrat and he was not after the big desk and the title. He wanted to contribute to the world and thought the secretary-general’s office was the best place to do so. No one is perfect, high office demands compromises for practical achievements to win allies and majorities.”

But in office, on development goals, poverty, human rights, gender equality and many other issues, he advanced the UN agenda even as he re-wrote it. After office, Annan continued to do so, with the Elders and his own Foundation, said Williams.

James Paul, who served as executive director of the New York-based Global Policy Forum and monitored the United Nations for over 19 years, told IPS there are many stories about Kofi that deserve attention.

The most important may be about how he told a reporter that the Iraq War was contrary to the UN Charter, and not long afterwards sent a letter to US President George W Bush calling on the United States not to attack Fallujah.

This was before the 2004 US elections and Bush was livid. Soon thereafter Washington claimed to have uncovered a huge “financial scandal” at the UN.  Kofi was threatened by the US and was nearly forced out of office, said Paul.

He was summoned to a meeting at a private apartment in New York and forced eventually to agree to a wholesale change in his top staff in the fall of 2004 (which was detailed in a New York Times article).

After losing his key lieutenants and being humiliated, his wings were clipped. And throughout his tenure, his policies were never up to his charisma. He cut the budget to please Senator Jesse Helms.

He was the first secretary-general to promote a UN relationship with multinational companies (the Global Compact) and he gave backing to the aggressive US-UK program of “humanitarian intervention,” said Paul, author of “Of Foxes & Chickens: Oligarchy and Global Power in the UN Security Council”

When Annan completed his 10-year tenure as secretary-general, he left behind a mixed political legacy: his acknowledged successes in promoting peace, development, gender empowerment and human rights, and his self-admitted failures in reining in a sprawling U.N. bureaucracy facing charges of mismanagement.

Annan, who served as the seventh secretary-general, from January 1997 to December 2006, shared the 2001 Nobel Peace Prize with the United Nations.

At his farewell press conference in mid-December, Annan specifically zeroed in on the multi-billion-dollar oil-for-food programme, which he said was “exploited to undermine the organization.”

“But I think when historians look at the records, they will draw the conclusion that yes, there was mismanagement; (and) there may have been several U.N. staff members who were engaged” in unethical behaviour.

“But the scandal, if any, was in the capitals, and with the 2,200 companies that made a deal with (Iraqi President) Saddam (Hussein) behind our backs,” he added.

The “capitals” he blamed were primarily the political capitals of the 15 member states of the Security Council — and specifically the five permanent members, namely the United States, Britain, France, China and Russia (P-5), under whose watchful eyes the notorious oil-for-food kickbacks took place.