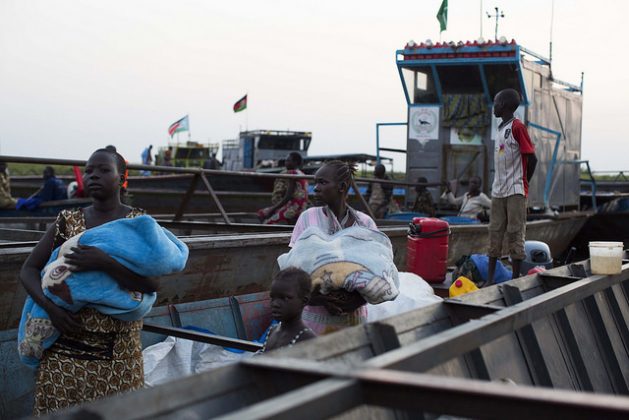 Two mothers and their children look to shore after arriving by boat to Mingkaman, Awerial County, Lakes State, South Sudan. In 2014 in less than a month close to 84,000 fleeing the fighting in Bor crossed the river Nile. South Sudan has been mired in civil conflict since December 2013. Some 2.8 million people, a majority of whom depend on livestock for their livelihoods, are now facing acute food and nutrition insecurity, according to FAO. Credit: Mackenzie Knowles-Coursin/IPS

UNITED NATIONS, Sep 27 2018 (IPS) - Reversing years of progress, global hunger is on the rise once again and one of the culprits is clear: conflict.

A high-level side event during the 73rd session of the United Nations General Assembly brought together, U.N. officials, governments, and civil society to assess and recommend solutions to the pressing issue of conflict-based food insecurity.

“The use of hunger as a weapon of war is a war crime. Yet, in some conflict settings, parties to conflict use siege tactics, weaponise starvation of civilians, or impede life-saving humanitarian supplies to reach those desperately in need." -- Action Against Hunger’s CEO Veronique Andrieux

“Conflict-related hunger is one of the most visible manifestations to human suffering emerging from war…this suffering is preventable and thus all the more tragic,” said United States’ Agency for International Development’s (USAID) administrator Mark Green.

The Global Report on Food Crises found that almost 124 million people across 51 countries faced crisis-level food insecurity in 2017, 11 million more than the year before.

Conflict was identified as the key driver in 60 percent of those cases.

The report predicts that conflict and insecurity will continue to drive food crises around the world, including in the Democratic Republic of Congo, South Sudan, Syria, and Yemen.

Panellists during the “Breaking the Cycle Between Conflict and Hunger” side-event noted food insecurity is often a tell-tale sign of future potential conflict and can lead to further insecurity.

World Food Programme’s executive director David Beasley echoed similar sentiments, stating: “If you don’t have food security, you’re not going to have any other security. So we have to address the fundamentals.”

In an effort to address conflict-based hunger and the worrisome reversal in progress, the U.N. Security Council for the first time recognised that armed conflict is closely linked to food insecurity and the risk of famine earlier this year.

The group unanimously adopted resolution 2417 condemning the use of starvation as a weapon of war and urged all parties to conflict to comply with international law and grand unimpeded humanitarian access.

While participants lauded the historic resolution, they also highlighted that it alone is not enough.

“Humanitarian action and technical solutions can mitigate the effects of food crises but we desperately need political solutions and we need to implement [resolution] 2417 if we are to reverse the shameful, upwards trajectory of hunger primarily resulting from conflict,” said Action Against Hunger’s CEO Veronique Andrieux.

In order to prevent food crises and thus conflicts from escalating, the international community must take a holistic, preventative approach and strengthen the humanitarian-development nexus. 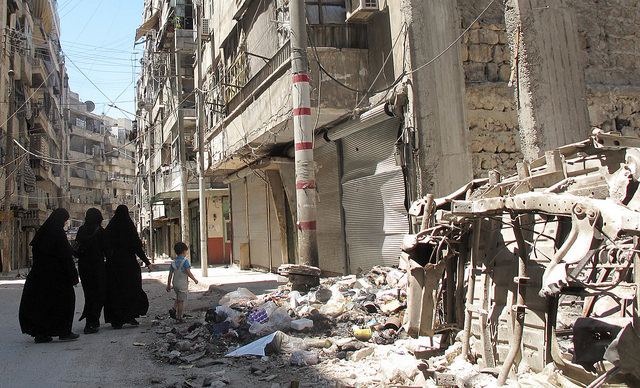 Before the long-running war began, Syria faced a drought which caused a spike in prices and led to food shortages. Many theorise that it was these very conditions that set off the civil war in 2011. This is a picture dated August 2014 of the then rebel-held Aleppo city, Syria. The government has since taken control of the city. Credit: Shelly Kittleson/IPS

Beasley pointed to the case of Syria where a seven-year long conflict has destroyed agricultural infrastructure, local economies, and supply chains and has left over six million food-insecure.

“The cost for us to feed a Syrian in Syria was about 50 cents a day which is almost double the normal cost because it is a war zone. If that same Syrian was in Berlin, it would be euros per day,” he told attendees.

“It is a better investment if we address the root cause as opposed to reacting after the fact,” Beasley added.

Before the long-running war began, Syria faced a drought which caused a spike in prices and led to food shortages. Many theorise that it was these very conditions that set off the civil war in 2011.

“Early action response to early warning is critical. We cannot wait for the conflict to start. We know that it will start,” said Graziano da Silva.

And it is data that can help establish early detection and prevent such crises, Graziano da Silva along with the other panelists stressed.

The Global Network against Food Crises (GNFC), which publish the Global Report on Food Crises, brings together regional and national data and analysis to provide a comprehensive picture of food insecurity globally.

It was the GNFC that enabled agencies to mitigate food crises and avert famine in northern Nigeria and South Sudan.

Just prior to the side event, FAO and the European Commission partnered to boost resilience and tackle hunger by contributing over USD70 million.

Panelists stressed the importance of such partnerships in addressing and responding to the complex issue of conflict-based food insecurity.

“At the ground, when we work together, it’s not only that we do better…we are much more efficient,” Graziano da Silva said.

Andrieux highlighted the need to uphold respect for international humanitarian law and that the U.N. and member states must hold all parties to the conflict to account.

“The use of hunger as a weapon of war is a war crime. Yet, in some conflict settings, parties to conflict use siege tactics, weaponise starvation of civilians, or impede life-saving humanitarian supplies to reach those desperately in need,” she said.

“We believe this is failing humanity,” Andrieux added.

Green pointed to the conflict in South Sudan where fighters have blocked desperately needed humanitarian assistance and attacked aid workers.

The African nation was recently ranked the most dangerous for aid workers for the third consecutive year.

Though the task of tackling conflict-based hunger is not easy, the solutions are there. What is now required is commitment and collective action, panelists said.

“All of us working together with effective solutions—we can truly end world hunger,” Beasley said.