Hanitranirina Rarison is an agronomist specializing in food sciences in Fanilon’I Madagasikara. She is also a Girl Guide and actively involved in its nutrition advocacy program. 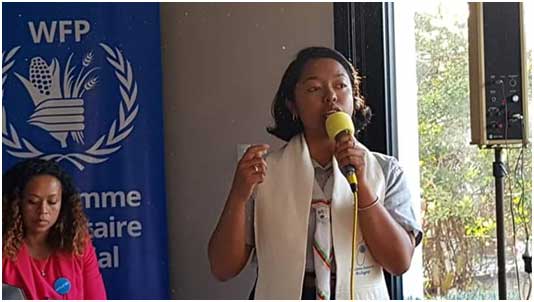 Agronomist and Girls Guide Hanitranirina Rarison is combining all her skills and experiences to help rid Madagascar of malnutrition.

ANTANANARIVO, Madagascar, Oct 24 2018 (IPS) - As much as 80 percent of Madagascar’s population of 24 million people is involved in agriculture and the country’s economy largely depends on the sector, yet 48 percent of households are faced with food insecurity according to the National Nutrition Office (NNO). Over 70 percent of households live below the national poverty line of 535,603 Malagasy ariary per year (1 U.S. dollar equals 3,447.50 ariary).

In rural Madagascar, where subsistence farming is the primary economic activity, as high as 86 percent of households live in poverty. For most of these households, there is a predictable gap of four to five months each year in which staple food production (mainly rice) is not enough to cover the demand.

During this time, the rice yield is low or destroyed by cyclone or flooding. Cassava or sweet potatoes replace the rice, providing mostly carbohydrates in the diet.

Madagascar is the fifth most malnourished country in the World, the NNO says. Slightly more than 47 percent of children under five years are stunted meaning nearly one in two children are malnourished.

According to the DHS Survey in 2010, acute malnutrition affected 27 percent of young women 15–19 years old in 2009, especially in rural areas. Anemia is present in 35 percent of women 15–49 years old.

A lack of direct access to food and production more seriously disadvantages women than men the World Food Program says, and good nutrition is especially critical for adolescence girls.

During this critical growth period, they need more iron, for example, to compensate for blood loss from menstruation. Good nutrition also helps to provide immunity against diseases and provides the energy they need to help them thrive.

However, there are not enough projects or programs supporting women and girls’ nutrition. Most projects support the first 1000 days of life through nutrition intervention at national nutrition sites located mostly in rural areas or in areas vulnerable to malnutrition.

These are common spaces in communities reserved for training mothers on breastfeeding, how to monitor and evaluate the growth of the child from birth to two years, and on nutritious baby food and the importance of colored-diversified food. These programs are an important part of Madagascar’s attempt to fight malnutrition.

Madagascar has partially implemented the four remaining strategies: 1) preparation and intervention for nutrition emergency, 2) a national system of nutrition and food supervision, 3) development of the national capacity building, and 4) nutrition intervention relating to emergent problem (HIV/AIDS) and non-communicable disease.

The remaining two interventions have not started. These focuses on integrating development initiatives and providing legislative framework around food and nutrition.

Phase two of the plan outlines steps to address malnutrition, the food and nutrition security for vulnerable households, and the coordination and improvement of the nutrition sector growth.

Phase three was launched in 2017 (NNO, 2017) and focuses on deepening the phase two interventions as well as improving access to health services and safe drinking water and sanitation, with special attention on pregnant and lactating women and adolescent girls.

Raising public awareness of the National Plan of Action on Nutrition is key to its overall success. This is being addressed, in part, by community sensitization through television, radio, and print media.

Madagascar is among the pilot countries in the World Association of Girl Guides and Girl Scouts Nutrition Programme, and as agents of change, Girl Guides in Madagascar are joining the campaign to fight malnutrition through advocacy and communications. We have taken part in the design of the nutrition curriculum, and currently, 80, 000 members in all 22 administrative regions (even in extreme rural areas) are involved in the movement in Madagascar

The youth advocates pool, a group of Girl Guides involved in nutrition advocacy in Madagascar, will help promote sensitization through online portals and in-person meetings in communities. The pool will help deliver public education from the nutrition program curriculum and speak at relevant nutrition events in our country.

Media support on nutrition will be important to change community behavior and influence decision-makers and policymakers. In addition to its members, Girl Guides plans to use media to sensitize another 40,000 people in the community.