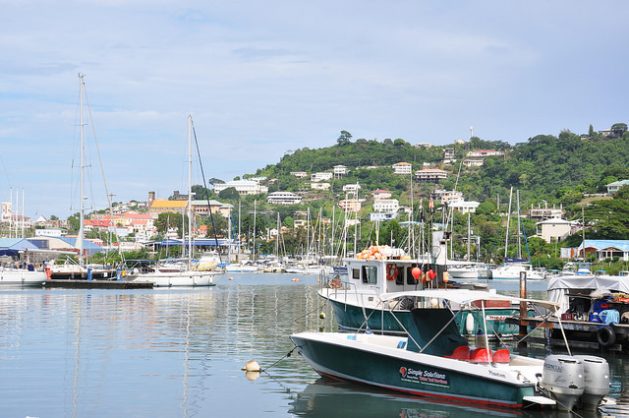 Currently, several households in the 134-square mile island of Grenada, in the Eastern Caribbean, find themselves affected by water constraints. Credit: Desmond Brown/IPS

PORT-OF-SPAIN, Nov 26 2018 (IPS) - Water-scarce Grenadians will soon get some relief through a Green Climate Fund-approved project to be launched next year that will make Grenada’s water sector more resilient to the impacts of climate change.

Currently, several households in the 134-square mile island of Grenada, in the Eastern Caribbean, find themselves unable to pursue activities at their leisure because of water constraints. “At certain times of the year, people have to reach home at a particular time to fill water containers for use,” said Titus Antoine, acting head of the Economic and Technical Cooperation Department in Grenada.

He told IPS that while some communities in Grenada have a “good, consistent flow of water,” others, particularly in the southern tip of the island where residential and tourism accommodation density are high, suffer “a general shortage.”

That part of the island is the most “water starved”, Antoine said, “because of the erratic rainfall, limited water storage and the high demand when the tourism sector sometimes competes with residential demand.”

The Climate Resilience in Grenada’s Water Sector (G-Crews) project, whose USD42 million budget will be mostly met by the USD 35 million grant from the GCF, is designed to tackle water issues brought about by climate change. Among the various components of the project are a challenge fund for two of the biggest users of water in the island, agriculture and tourism; expanding the infrastructure of the island’s National Water and Sewerage Authority (NAWASA); and retrofitting existing infrastructure to reduce leaks in the distribution system, as well as to better cope with extreme weather events such as hurricanes.

“The overall goal is to increase systemic climate change resilience in Grenada’s water sector. What that means in practice is to both increase the water supply that is available as well as to strategically lower water demand in many sectors, particularly during the dry season. What is needed in order to achieve that is to improve water resource management, to increase water use efficiency and to enhance the Grenadian water infrastructure,” said Dieter Rothenberger, the head of Deutsche Gesellschaft fuer Internationale Zusammenarbeit (GIZ)’s climate change projects in Grenada. GIZ is the implementing partner for the G-Crews project.

Grenada approached the GCF in partnership with GIZ for funding for the water resilience project, because “water is one of the sectors the most negatively affected by climate change,” Antoine said, “with increased drought conditions and changes in the availability of fresh water. There is less rainfall. And when it does come, the timing and heavy type of rains wreaks havoc on the farming sector.”

After widespread consultation, Grenada decided water was a priority area that “if not addressed, it [would inhibit] regular economic development,” particularly in relation to the farming and tourism sectors, Antoine said

The G-Crews project, which runs from 2019 to 2023, is part of a much larger climate change initiative by the Grenada government, known as the Integrated Climate Change Adaptation Strategies (ICCAS) project. That initiative has involved the Grenada government working with Giz and the United Nations Development Programme since 2013. “[ICCAS] was about mainstreaming climate adaptation issues within sectors like agriculture, coastal zone management, and indeed water…,” Rothenberger said.

One of the goals of the G-Crews project, to strengthen the adaptive capacity and reduce the exposure of households, farmers and tourism businesses to the impacts of climate change on water supply, has led to the creation of a challenge fund. This fund will help “to make sure the private sector, in particular tourism stakeholders and farmers, are benefiting from G-CREWS, but are also contributing in making Grenada climate resilient. This challenge fund will be managed by the Grenada Development Bank (GDB),” Rothenberger told IPS by e-mail.

Antoine explained that the challenge fund will provide grants to the tourism and agriculture sector covering up to 50 percent of the cost “to adopt technology for greater efficiency in water use”.

“It will allow the tourism sector to retool in terms of water efficiency and it will allow farmers to be able to purchase irrigation technology that will make better use of scarce resources,” he added.

The water resiliency project will also extend NAWASA’s existing water storage capacity at strategic locations throughout the island. This increased storage will make accommodation for reduced or erratic precipitation, increased temperatures and salt-water intrusion due to sea level rise.

In addition, “the current storage capacity for water in the event of a hurricane is up to three days,” Antoine said. “This project will move that to three weeks capacity.” It will also help Grenada meet the global Sustainable Development Goals for water, he added.

A criterion for funding by GCF is a project’s modalities for continuation and sustainability, Antoine said. “Grenada is accustomed to handling these types of projects and we do have the local capacity,” for ensuring its viability, he said.

“Over 42 million USD is a major investment in Grenada’s context,” he added. “There are other mechanisms out there for financing, but the GCF was particularly attractive because of the scope of this project. We saw it as a natural fit since it provided the opportunity to provide the scale of investment we wanted to have. We partnered with Giz, which is an accredited entity with the GCF.”

“The Green Climate Fund only supports projects which can prove to be highly climate relevant,” Rothenberger said. “This means that you have to convincingly show that the project will solve a challenge induced by climate change impacts now, but particularly in the future….That meant taking into account how climate change will impact the water sector in the future, including future water availability and scarcity. This was done by using existing regional climate models and fine-tuning and updating them for Grenada.

‘The result of the modelling was that the conditions, including water availability, which Grenada had in the most serious recent drought in 2009/2010 will be the new climate normal in 2050. So the interventions were designed in a way to ensure that Grenada’s water sector can deal with such conditions as the new normal. In that sense, CREWS addresses both present as well as future challenges,” Rothenberger said.