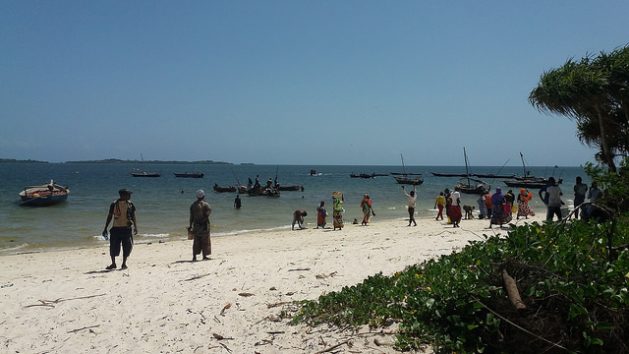 People at Gasi Beach in Kwale County, on Kenya's Indian Ocean coast, wait for fishermen to buy their daily catch. Demand for fish in Kenya is on the rise courtesy of fast population growth of around three percent per year and increased awareness of the nutritional value of fish. Credit: Diana Wanyonyi/IPS

KISUMU/VIHIGA, Kenya, Nov 19 2018 (IPS) - Despite the humid late October midday weather in Kisumu County near the shores of Lake Victoria, Jane Kisia is busy walking around her fish ponds feeding her fish. As she rhythmically throws handfuls of pellets into the ponds, located within her homestead, the fish ravenously gobble them up.

Kisia, a retired teacher, has been rearing fish for six years. In 2016 she was enlisted in the Kenya Market-led Aquaculture Programme (KMAP), to boost aquaculture and protect Lake Victoria’s dwindling stocks. KMAP, which runs from 2016-2019, is a programme by Farm Africa, a charity organisation. It covers 14 counties in Kenya’s central and Lake Victoria regions.

“KMAP has been providing training on aquaculture which has enabled me to harness the sector’s opportunities,” Kisia tells IPS.

Aside from just the training, KMAP has also given her a valuable link to traders. “When my fish mature, buyers are just a phone call away,” says Kisia.

Demand for fish in Kenya is on the rise courtesy of fast population growth of around three percent per year and increased awareness of the nutritional value of fish.

Unfortunately, the country’s fish production is heavily reliant on wild fish caught in its lakes whose stocks are sharply declining. The Kenya National Bureau of Statistics in April reported that over the last five years fish landed, including from lakes, marine source and fish farming, has declined from over 163,000 tons in 2013 to 135,000 tons last year. This has led to scarcity and high costs.

The scenario is unfolding despite the country having over 1.14 million hectares of land ideal for aquaculture as per the 2017 Aquaculture Report of the Kenya Marine and Fisheries Research Institute (KMFRI).

Not even a government programme to boost the aquaculture sector that saw 48,000 fish ponds across the country almost a decade ago solved the problem of low fish supply. This is because the programme had only shown people how to dig ponds and stock them with fingerlings. While a few training sessions were held, the beneficiaries of those programmes were largely left to themselves. 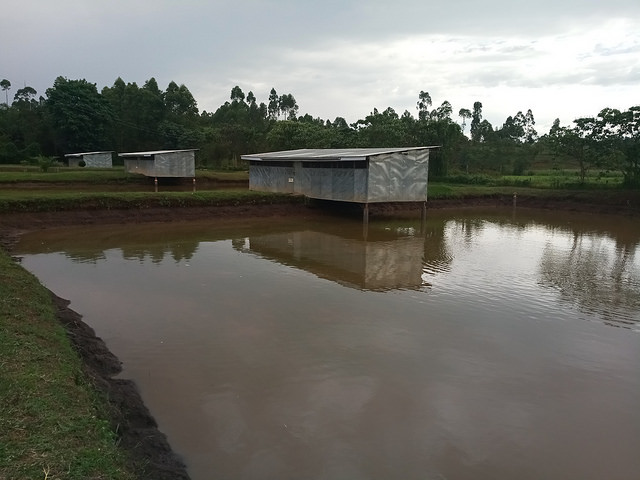 An integrated fish and poultry rearing system. Poultry houses are built above fish ponds for chicken droppings to supplement feeds. NGO Farm Africa, are training rural farmers in Kenya’s 14 counties on how to start their own fish farms. The country’s fish production is heavily reliant on wild fish caught in its lakes whose stocks are sharply declining. Credit: Justus Wanzala/IPS

Teddy Nyanapa, Farm Africa’s coordinator, tells IPS they empower rural farmers through closely engaging with them, monitoring their progress, providing technical expertise, advice on markets and natural resources preservation. He adds that they also lobby for an improved legislative environment for the sector.

The Sustainable Blue Economy Conference
The first global Sustainable Blue Economy Conference will be held in Nairobi, Kenya from Nov. 26 to 28 and is being co-hosted with Canada and Japan. The aim of the conference is learn how to build a blue economy that harnesses the potential of the world’s oceans and waterbodies in order to improve the lives of all.

Nyanapa explains that the programme encompasses all players in the fish value chain. These include farmers, feed manufacturers and fish traders.

He says apart from fish husbandry practices, farmers are also trained on book keeping and financial matters. They have enlisted some 1,100 farmers.

Each of the 14 counties has agents who assist farmers in adhering to best practices. “The agents are aquaculture extensionists, mostly recent graduates from colleges, for we need personnel to promote aquaculture adoption with zeal,” Nyanapa tells IPS. This level of engagement is believed to be the reason for the success of this project.

He observes that fingerlings are in low supply, stating that there are only 12 official hatcheries in Kenya.

KMAP works with three large capacity feed manufacturers. They have been trained on feed quality standards and palpability.

Nyanapa laments that there is no standard size for juvenile fish sold to farmers, with some sold so small that they rarely survive, which causes losses.

He agrees with the three farmers that the cost of feed is a huge challenge, as it can account for 70 percent of the farming costs.

“We rely on commercial feeds which are costly, yet sometimes quality is poor and supply inconsistent,” explains Kisia.

At Ebenezer Children’s Home and Life Centre, a boarding school for both primary and secondary school children, KMAP is working with its management on an aquaculture initiative for nutrition and commercial purposes.

Martha Achieng, a teacher/farm manager at Ebenezer Children’s Home and Life Centre, which is also based in Kisumu County, says they started aquaculture in 2012.

“The initial aim was to rear fish for food, given that some of the children are living with HIV/AIDS, but after our first harvest we sold the surplus and made Kenya Shillings 200,000 (2,000 USD) and realised it is a lucrative venture,” Achieng tells IPS.

The centre which has some 1,000 pupils, has six ponds stocked with Tilapia and Catfish.

Achieng says that since wild fish stocks are dwindling, the government should subsidise the costs borne by aquaculture farmers.

“There is need for a shift in policy by curbing Chinese fish imports and lowering the cost of inputs to tap the huge potential of aquaculture,” she adds.

However, this October, Kenyan President Uhuru Kenyatta proposed banning these imports that were competing with the livelihoods of local fishers.

But some local fish farmers under KMAP are opting to go large scale, thereby marginally increasing the local supply of fish.

Stephen Lukorito, a Farm Africa agent in neighbouring Vihiga County, says there are some 100 fish farmers in the county. He says the potential for aquaculture is huge.

Beauty Farm in Vihiga County has five ponds that serve as a training centre for youth keen on practicing aquaculture.

Wilson Ananda, the farm manager, tells IPS that the demand for fish in the area is so huge that every time they harvest, the whole catch is bought by local community members.

Also in Vihiga County, a farm run by a company called Bunyore Riverside Development (BRAD) rears over 19,000 fish in six ponds of 60 x 30 metres. It has an integrated fish and poultry rearing system. Poultry houses are built above fish ponds and chicken droppings create algae in the water, on which the fish feed.

Emmanuel Simiyu, BRAD’s manager, says they supply their fish to hotels, restaurants, schools and hospitals. He adds that they face a challenge of ready supply of fingerlings and will soon venture into their production.

Other organisations have partnered with KMAP to offer support on hatcheries management, monitoring and evaluation, while some like the World Fish Centre provide advice on suitability of various fish species in different ecological zones.

And training has been extended to government fisheries officers: 28 have been trained in the Lake Victoria region on modern aquaculture technologies.

Some farmers are also selected and trained as peer mentors.

Nyanapa says that before the project closes they want to mobilise farmers to work in clusters or groups to purchase inputs and access markets and finance.

Ultimately there is the hope that the fish farms will remain a thriving success once the project has ended. It brings Kenya one step closer to increasing its own production of fish.