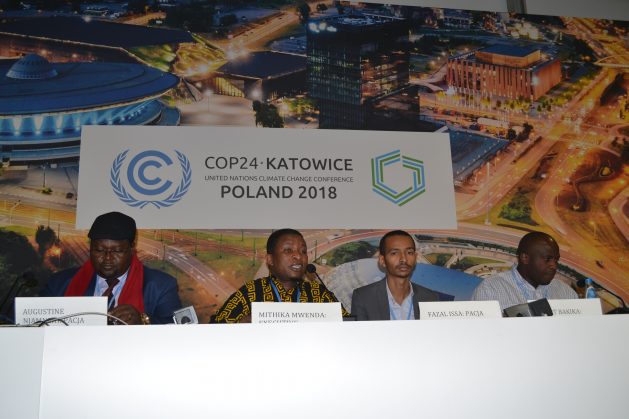 Members of African civil society express their frustrations about the climate change negotiations during a press conference held at COP24 in Katowice, Poland. Credit: Isaiah Esipisu/IPS

KATOWICE, Poland, Dec 8 2018 (IPS) - Implementation of the Paris Agreement on climate change is in limbo as developed countries remain noncommittal to financial obligations at the ongoing negotiations in Katowice, Poland.

Professor Seth Osafo, the Advisor to the Africa Group of Negotiators (AGN), said today, Dec. 8, that his colleagues from the developed world were shifting goals to put the burden of financing the implementation of the Paris Agreement on the private sector.

“A man who is drowning has no luxury of a choice. Africa is drowning and we have no choice, other than using all means to salvage the continent.” -- Augustine Njamshi, the executive director of the Bioresources Development and Conservation Programme in Cameroon.

The Paris Agreement is an agreement reached at the 21st Conference of the Parties (COP 21) in Paris, France, where the world’s nations undertook a determined course to reduce climate change. Among the commitments was to keep the increase in global temperatures under 2 degrees Celcius.

Osafo’s concerns were confirmed by Mohamed Nasr, Chair of the AGN. He said that during this past week there had been very little progress with regards to financial commitments from the developed world to address loss and damages related to past injustices, adaptation, gender equality, and the empowerment of women, among other issues. The seeking of a commitment from developed nations on this is being spearheaded by the African team.

“The progress so far is not up to expectations, and if this is the way [negotiations will] go, it means we will not be able to implement what we agreed to in Paris,” said Nasr. “We should not choose parts of the agreement to implement and leave other parts behind,” he told IPS in an interview on Friday.

Despite the challenges, a document for negotiation must be drawn up by tonight.

This past week, negotiators representing different Parties (countries) have been discussing the outline of what is known as the ‘Rulebook’ for the Paris Agreement. This includes the rules, procedures and guidelines that countries should follow to enable them implement the Paris Agreement at national level.

The outcome of the week-long negotiations will then be submitted to ministers of the various countries on Monday for deliberations to decide whether or not to adopt positions taken by technical teams.

“We are hoping that we will finish drafting the rules of implementation today, so that we have a document to show to the ministers when they arrive for political engagements next week,” said Osafo. 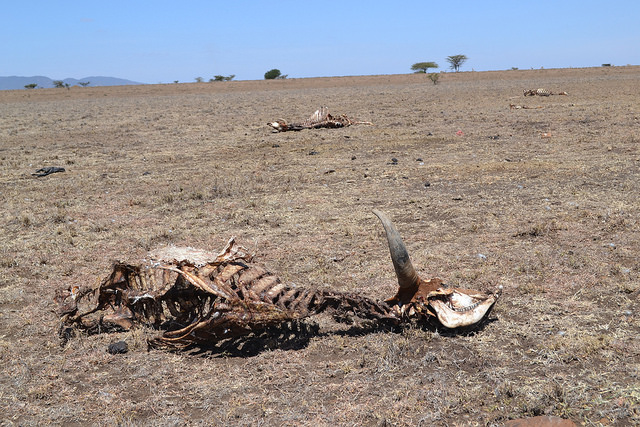 In 2017 drought ravaged almost half of Kenya’s 43 counties, with the Turkana region in northern Kenya being the worst affected. The region mostly consists of pastoralists who lost livestock during the drought. Credit: Isaiah Esipisu/IPS

Under the Paris Agreement, developed countries committed to availing 100 billion dollars by 2020 to finance implementation of the accord through the Green Climate Fund (GCF).

However, there have been setbacks. During the Paris negotiations the United States, which is considered to be one of the main polluters of the environment, pledged to deposit three billion dollars to the GCF. Under former President Barrack Obama’s administration, the country delivered one billion dollars. But since President Donald Trump assumed power he has rejected the agreement, adding that climate change is a hoax.

At the Katowice negotiations, the U.S. and the European Union are asking for a Rulebook that will not demand they divulge the exact amounts of money they provide to poorer nations for climate finance, especially to cater for loss and damages.

This has not gone down well with African civil society organisations who have demanded the fulfilment of the pre-2020 climate finance commitments at the onset of the negotiations earlier this week.

“We see a clear intent from the developed country parties to shift their convention obligations on the provision of climate finance to private institutions and, worse still, to developing countries. This is not, and will not be, acceptable,” said Mithika Mwenda, the Executive Director at PACJA.

“If it continues like this, we will be forced to protest or even pull out from the negotiations altogether,” he told IPS.

Augustine Njamshi, the executive director of the Bioresources Development and Conservation Programme in Cameroon, said: “We have no option, but to use all available means to make things happen.”

“A man who is drowning has no luxury of a choice. Africa is drowning and we have no choice, other than using all means to salvage the continent,” he told IPS.

Nasr said that the African negotiators have been forced to send messages through informal discussions with colleagues from the developed world to salvage the situation.

“We are just telling them that if we do not have the components that we have asked for, the package will not be for Africa, and Africa will not be part of it,” he said.