Eat Plants, Save the Planet 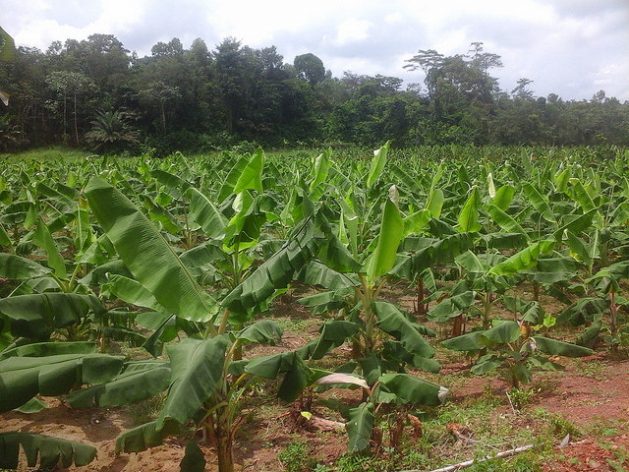 A plantain farm on the outskirts of Abidjan, Cote d'Ivoire. Current food production is among the largest sources of environmental degradation across the world. Credit: Friday Phiri/IPS

UNITED NATIONS, Jan 21 2019 (IPS) - While the modern agricultural system has helped stave off famines and feed the world’s 7 billion residents, the way we eat and produce food is posing a threat to future populations’ food security.

With an expected increase in population to 10 billion in 2050, ensuring food security is more important than ever.

However, current food production is among the largest sources of environmental degradation across the world.

If such production and consumption patterns continue, we will soon exceed our planetary boundaries such climate change and land use needed to survive and thrive.

“It was quite dramatic to see how much those planetary boundaries would be exceeded if we don’t do anything,” said Marco Springmann, one of the authors of a report examining the impact of the food system on the environment.

“The food system puts pressure on land management, in particular deforestation. If you knock down too many forests, you basically really mess up the regulating system of the ecosystem because forests store carbon dioxide but they also are habitats for wild species and biodiversity reservoirs,” he added.

Over 40 percent of the world’s land has been converted or set aside for agriculture alone. This has resulted in the loss of more than half of the world’s forests.

The United Nations Convention to Combat Desertification (UNCCD) notes that commercial agriculture is a key driver, especially the production of beef, soy beans, and palm oil.

This can be seen in the Amazon where trees have been cut down and land converted to make way for agricultural activities such as cattle ranching and soy cultivation, much of which is used as animal feed rather than for human consumption.

In fact, half of the planet’s usable land surface is devoted to livestock or the growing of feed for those animals, an area equivalent to North and South America combined.

The intensive use of fertilisers has further diminished land productivity, leading to degradation and even desertification.

According to the “Options for keeping the food system within environmental limits” report, published in the Nature journal, the food system emitted over 5 billion tonnes of carbon dioxide in 2010 alone.

The study also estimates that the environmental effects of the food system could increase by 50-90 percent without any targeted measures, beyond the “safe operating space for humanity.”

Springmann pointed to three ambitious measures that are necessary in order to stay within environmental limits including technological improvements which can increase sustainable food production and thus decrease the demand for more cropland.

Another measure seems to be even more daunting: shifting to a plant-based diet.

“If you go even more plant-based that would be even better for greenhouse gas emissions, and also it is more well-balanced and better for your health….the estimates are such that we would reduce the pressure on land use if we changed our diets,” Springmann told IPS.

The Nature report found that dietary changes towards healthier diets could help reduce GHG emissions and other environmental impacts by almost 30 percent.

A new report from the EAT-Lancet Commission also highlighted the need for dietary changes for environmental sustainability and public health.

“The food we eat and how we produce it determines the health of people and the planet, and we are currently getting this seriously wrong,” says one of the commission authors Tim Lang.

“We need a significant overhaul, changing the global food system on a scale not seen before in ways appropriate to each country’s circumstances. While this is unchartered policy territory and these problems are not easily fixed, this goal is within reach.…the scientific targets we have devised for a healthy, sustainable diet are an important foundation which will underpin and drive this change,” he added.

EAT-Lancet Commission’s recommended planetary health diet requires the consumption of red meat to be cut by half, while vegetables, fruit, and nuts must double.

North America has one of the highest meat consumption rates in the world. In 2018, American meat consumption hit a record high as the average consumer ate over 222 pounds of red meat and poultry.

If they are to follow the planetary health guidelines, North Americas would have to cut their consumption of red meat by 84 percent and eat six times more beans and lentils.

While plant-based diets have gained popularity in the region, seen through the success of the Beyond Meat and Impossible Burger companies, Springmann noted that information alone may not be enough to promote dietary changes.

“Of course everyone can change their diet and it would be great if they can do that. But if it is not made easy for the average consumer to do that then many people won’t do it,” he said.

Springmann suggested changing the prices of food products to include health and environmental impacts.

Beef for example would need to cost 40 percent more on average due to its contribution to GHG emissions.

This provides governments with potential revenue to invest in other areas such as the subsidisation of healthier products.

In addition to dietary changes, the EAT-Lancet Commission state that zero loss biodiversity, net zero expansion of agricultural land into natural ecosystems, and improvements in fertiliser and water use efficient are needed.

“The transformation that this Commission calls for is not superficial or simple, and requires a focus on complex systems, incentives, and regulations, with communities and governments at multiple levels having a part to play in redefining how we eat,” said The Lancet’s Editor-in-Chief Richard Horton.

“Our connection with nature holds the answer, and if we can eat in a way that works for our planet as well as our bodies, the natural balance of the planet’s resources will be restored. The very nature that is disappearing holds the key to human and planetary survival,” he added.