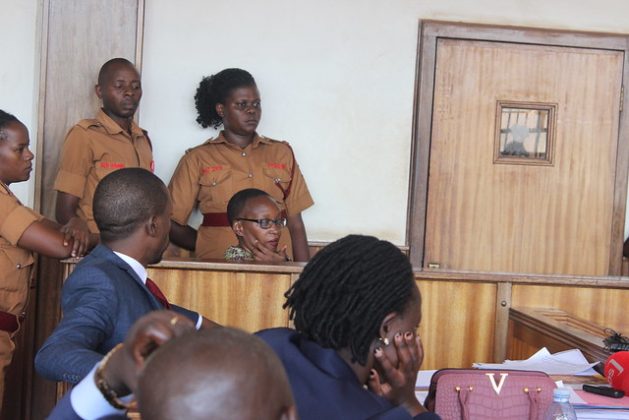 Dr. Stella Nyanzi (seated with glasses), a lecturer and researcher at Makerere University and feminist and activist, was convicted on Aug. 2 for publishing a poem critical of Uganda’s President Yoweri Museveni. She is pictured here in the dock, surrounded by prison warders. Credit: Wambi Michael/IPS

KAMPALA, Aug 6 2019 (IPS) - The conviction of Ugandan feminist and activist Dr. Stella Nyanzi for publishing a metaphorical poem about President Yoweri Museveni could have a chilling effect of freedom of expression, according to Dr. Peter Mwesige, co-founder of the Kampala-based African Centre For Media Excellence.

“There are very many people who are going to think twice before they can express themselves in certain terms. I think it narrows the frontiers of the right to free expression. Absolutely it does,” Mwesige, who is also a former group training editor of the Nation Media Group, East Africa’s biggest multi-media company, told IPS.

Mwesige said that going forward those who did not have Nyanzi’s courage would not be able to say certain things in public for fear of being sent to prison.

On Friday, Aug. 2, Nyanzi was found guilty of “cyber harassment” for  posting a poem on Facebook on Museveni’s birthday on Sept. 16, criticising his 33-year rule and his birth. She was given 18 months imprisonment for writing the strongly-worded verse that spoke about oppression, unemployment and the country’s absence of good governance and rule of law.

The post has received over 1,800 likes and 2,000 comments. At the time some people reached out stating that they prayed for her safety as the post was so heavily critical of the government, others criticised her mention of Museveni’s late mother, asking her to allow the woman to rest in peace, and many others praised her poetry, agreeing with her vivid description of the oppression they also felt, and calling her a courageous woman.

One user messaged Nyanzi, who is a lecturer and researcher at Makerere University, saying: “Well, at the end of the day. All your wishes are in vain. None came true”, to which the poet responded, “Wishes are yearnings, desires, aspirations. Words are seeds! Watch my poem grow”.

The poem took on a new dimension a month later when Nyanzi was charged with violating the Computer Misuse Act 2011 sections on cyber harassment and “obscene, lewd, lascivious or indecent” content production. The prosecution had argued that she intentionally harassed and humiliated the president through her post. The academic was also charged with “offensive communication”, but she was found not guilty.

The Computer Misuse Act 2011 has provisions for offensive communication, which is defined as where a person “disturbs or attempts to disturb the peace, quiet or right of privacy of any person with no purpose of legitimate communication”. It also has provisions for cyber harassment, which is defined as the use of a computer for “making any request, suggestion or proposal which is obscene, lewd, lascivious or indecent”. A person can also be charged for cyber harassment if they knowingly allow someone to use their computer for the defined purpose.

Nyanzi has used Facebook as a platform to critique Museveni’s regime. Nyanzi’s poetic non-fiction posts on Facebook have won her admiration among some local writers and the academia and she has emerged as the regime’s most serious and profane adversary.  She has also defended her writing stating she pays for her posts on social media and can write what she wishes. Ugandans have to pay a tax to the government for their social media usage under the Excise Duty (Amendment) Bill, paying about 5 U.S. cents a day.

“For me, I don’t have guns, I don’t have money, I don’t have clout, I have Facebook and I have language. And I think we can continue be polite and continue suffering,” Nyanzi told journalists at court before her conviction.

Her trial attracted huge numbers of supporters and sympathisers, with the magistrate’s court in Kampala usually being filled to capacity for each appearance. She would occasionally plead with her supporters to calm down in court as she continued to speak out against Museveni’s rule while in the dock.

Nyanzi’s lawyer, Isaac Semakadde, told IPS that an 18-month jail sentence for an allegedly obscene post that was allegedly uploaded by Nyanzi is irreconcilable with not only the principals in the International Covenant on Civil and Political Rights (ICCPR)—an international human rights treaty adopted by the United Nations of which Uganda is a signatory of—but also Uganda’s bill of rights.

“The conviction is based on computer misuse admittedly through circumstantial evidence that is what I heard the magistrate say…. It was processed only through political interference,” said Semakadde.

Nyanzi, who was arrested in November and has remained behind bars since then after she refused to apply for bail, will serve out the remaining nine months of the sentence.

Meanwhile, her lawyer vowed to fight for the repeal of the Computer Misuse Law.

Responding to the guilty verdict, Joan Nyanyuki, Amnesty International’s Director for East Africa, the Horn and the Great Lakes, said in a statement: “Stella Nyanzi has been criminalised solely for her creative flair of using metaphors and what may be considered insulting language to criticise President Museveni’s leadership. The mere fact that forms of expression are considered insulting to a public figure is not sufficient ground to penalise anyone. Public officials, including those exercising the highest political authority, are legitimately subject to criticism and political opposition.”

Amnesty International said that Ugandan authorities must scrap the Computer Misuse Act 2011 which has been used systematically to harass, intimidate and stifle government critics.

Freedom of speech and expression have been increasingly under attack in Uganda. United States Ambassador to Uganda, Deborah R. Malac, had cited Nyanzi’s arrest as one of those attacks on World Press Freedom Day.

Nyanzi’s case is just the latest in a series of growing constraints that the media here faces.

In mid-July, a journalist-turned preacher, Joseph Kabuleta, was arrested and detained for four days after calling Museveni as a gambler, thief and liar in his Facebook postings.

Media professionals have had their houses broken into, their possessions stolen, their phones monitored, and their lives routinely threatened. The Observer newspaper has on several occasions been attacked by suspected government operatives.

Dr. Danson Sylvester Kahyana, a Ugandan poet and lecturer at Makerere University’s Department of Literature, told IPS that Nyanzi’s arrest and conviction will have a gaging effect on writers with a critical mind and could see more Ugandans withdraw from social media as a medium for free expression.

Ugandans have recently turned to social media to express their views and opinions, which are not published in mainstream media because of self-censorship.

“Most people have said Stella Nyanzi is vulgar, rude and so on. But one thing that they have missed out in is that it is this rudeness, this vulgarity that makes her be heard. If you write in a civil way or in a way that care about your image, chances are that you will be silenced,” said Kahyana.

He made reference to Uganda’s world-renowned associate professor of Literature at Makerere University, and one-time judge for the Commonwealth Writers’ Prize, Dr. Susan Kiguli, and Professor Timothy Wangusa, a Ugandan poet and novelist who also served as Dean of Arts at Makerere University and Minister of Education for the country.

“There is nothing new that Stella Nyanzi [has said] that these two writers have not said. Because they have engaged in issues of dictatorship, misrule, corruption in their works.

“But how come the nation knows more about Stella Nyanzi than them? It is because they have chosen to use civil language. That kind of language ends up in the library.”