Abdullah Yusuf is a lecturer in politics at the University of Dundee. 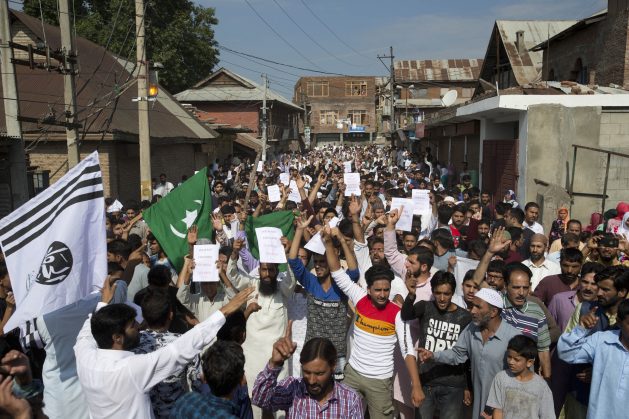 Sep 9 2019 (IPS) - August is immensely important in the history of the Asian subcontinent, marking the month that India and Pakistan gained independence from the British in 1947. Now, in 2019, it has once again proved momentous, when, ten days before India’s Independence day celebrations, prime minister Narendra Modi’s government revoked the autonomy of Indian-administered Kashmir – a status provided for under the Indian Constitution.

This latest move was a manifesto pledge from Modi’s Hindu nationalist Bharatiya Janata Party (BJP), which claims that Kashmir’s autonomy has hindered its development while fostering an area of thriving terrorism and smuggling.

Soon, thousands of troops were deployed and the valley region faced unprecedented lockdown. Experts say that Modi’s move to tether the Muslim majority of Kashmir is a gamble that could trigger conflict with Pakistan while reigniting an insurgency that has already cost tens of thousands of lives.

Until 1947, Kashmir was a territorially well-defined and functional state that had existed for a century before its seizure by the British in 1846. The British decolonisation of the subcontinent in 1947 was instrumental in creating disorder that pushed Kashmir into a repeated cycle of war and stalemate between Pakistan and India, which have both claimed the region as sovereign territory for the last 70 years.

Today, Kashmir’s geopolitical position and glacial water reserves – which provide fresh water and hydro-electric power to millions – add an extra dimension to the existing sectarian and ideological conflict between India and Pakistan over this small northern region.

The Kashmir issue has resulted in three wars between these two countries – in 1947, 1965 and 1999 – triggering numerous UN Security Council Resolutions – which unequivocally call for the Kashmiris’ right to self-determination.

Many within the region feel that Modi’s BJP is brazenly trying to change Kashmir’s ethnic composition to disadvantage India’s Muslim minority by encouraging more Hindus into the region. Since the revocation of Article 370 (which assured the region’s autonomy), Indian Kashmiri leaders who vehemently opposed the decision – including two former chief ministers – have been sent to jail.

Modi’s government has a history of stoking tensions between Hindus and Muslims, with its political rule now focused on “Hindutva”, which translates roughly as “Hindu-ness”, and reframes Hinduism as an identity rather than a theology or religion.

Modi has fostered Hindu nationalism through anti-Islamic rhetoric, accusing Muslim men of attempting to change India’s demographics by seducing Hindu women, as well as encouraging lynching of Muslims falsely accused of eating beef (from the sacred Hindu cow) in BJP controlled states. Clearly, these are tactics designed to expand the notion of Hindutva and further isolate the Muslim population within India. Targeting Kashmir is a crucial part of the strategy.

In the wake of India’s decision to revoke Kashmir’s special status, there are two key questions.

First, will it be beneficial to Kashmir as claimed by Modi’s government? The situation on the ground would suggest not. After a month of curfew and lockdown, protests have turned violent. The Indian government has been unable to restore peace in the valley despite the increasing atrocities. According to news reports, 4,000 people have been arrested since the territory lost its status.

Second, how is the situation affecting the already tense relations between India and Pakistan? India’s land grab comes just five months after a breakdown in relations following claims by India that a Pakistani-based suicide bomber killed 44 Indian soldiers in the Kashmir region, leading to airstrikes by both sides. The situation threatens to reignite this conflict with both countries cautioning the world about the nuclear option.

Addressing a joint session of Pakistan’s parliament on August 6, prime minister Imran Khan briefed lawmakers on the steps his government had taken towards peace in the region. But he maintained the situation in Indian-occupied Kashmir would deteriorate and its neighbour would blame and attack Pakistan.

Days later, Indian defence minister Rajnath Singh stated that India is committed to “no first use” of nuclear weapons, but future policy is dependent on the ever-evolving circumstances. These sentiments have led to international debate over the possibility of nuclear weapons being unleashed.

With this nuclear threat ever present, the situation in Kashmir is now one of the most dangerous in the world. Since the two countries have consistently failed to make any progress, external help from the international community and the UN is crucial in resolving the conflict and preventing further escalation.

As the world witnessed in the case of East Timor in 1999, independence from Indonesia after two decades of bloodshed was achieved following a referendum held under the stewardship of the UN. This result was not accepted by Indonesia, which launched a scorched-earth campaign, killing more than 1,500 Timorese, displacing nearly half the population, and razing much of East Timor to the ground.

The subsequent progression towards independence and peacebuilding was facilitated by external bodies such as the UN-mandated International Force in East Timor and the Transitional Administration in East Timor, underscoring the importance of support from both the UN and the international community.

The UN didn’t achieve success overnight, but endured through increasing international pressure, combined with a change in the Suharto government. Soon, Indonesia found itself falling out of favour with the international community.

There are parallels here for the Kashmir situation. Although progress may be slow while Modi’s populist BJP remains in power, pressure from the international community would likely go a long way towards pulling both countries back from the brink. In the meantime, while Modi tries to remake India in the BJP’s Hindutva image, for Kashmiris the struggle for self-determination goes on.

This article is republished from The Conversation under a Creative Commons license. Read the article here.