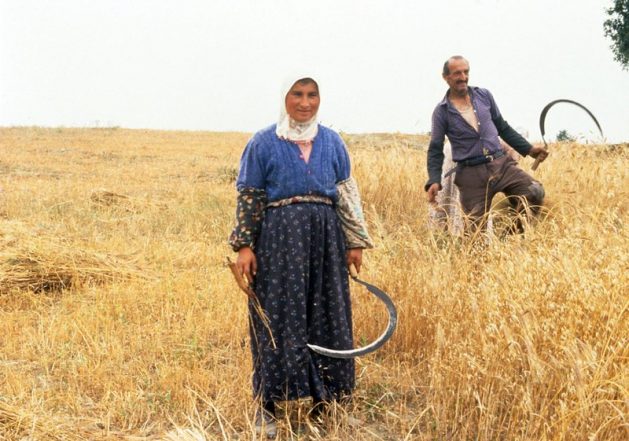 Turkey’s farmers struggle with the effects of climate change, land degradation and other barriers to sustainable agriculture. Mark Nesbitt/CC by 2.0

But local farming groups, NGOs and international bodies, while welcoming government efforts to promote sustainable farming, are urging more to be done as farmers struggle with the effects of climate change, land degradation and other barriers to sustainable agriculture.

Historically, the agricultural sector has also played a fundamental role in Turkey’s society and economy. Agriculture is the largest single employer – accounting for about a quarter of the country’s workforce by some estimates – and a major contributor to overall GDP, exports and rural development.

But in the last two decades the industry has changed. It is thought that as many as 2.5 million small-scale farmers have been forced to leave rural parts of the country to move to major cities in the hope of finding jobs amid rising costs of supplies and equipment for farming. This has not only hurt rural village communities but left millions of hectares of land unfarmed.

This has raised concerns over its food security and overall food sustainability.

In the latest Food Sustainability Index compiled by the Economic Intelligence Unit and the Barilla Centre for Food and Nutrition Foundation (BCFN), Turkey ranked 58th among 67 countries in terms of food sustainability.

But as experts point out, some areas of agriculture in the country, specifically sustainable agriculture, are seeing important progress.

“The food sustainability challenges Turkey faces are no different to those faced globally: population growth, rapid urbanisation and instability in rainfall regimes due to climate change are the major challenges,” Aysegul Selisik, Assistant Representative in Turkey for the Food and Agriculture Organisation of the United Nations (FAO), told IPS.

The FAO points to a number of recent initiatives set up across the country, some of which it is involved in, which have helped educate farmers about sustainable agriculture and promote its use.

One example is the establishment of so-called farmer field schools in the Konya Basin in the Central Anatolia region of the country promoting and supporting sustainable production and conservation, teaching farmers about, among others, reduced tillage techniques and programmed irrigation and water saving.

FAO says these initiatives will build on the knowledge and experience of thousands of farmers with further potential for scaling up to other topics and regions to strengthen farmers’ capacities in conservation agriculture.

The government has also run training programmes for farmers in provinces across the country with the aim of promoting sustainable, efficient and environment-friendly agricultural production, including the efficient use of all resources and conservation of land, plant and water resources. The programmes have been attended by hundreds of thousands of farmers, according to the government.

Meanwhile, other organisations are also helping farmers adopt more sustainable practices, including providing direct financial support. Banks such as the European Bank for Reconstruction and Development (EBRD) have loaned tens of millions of dollars to organic farmers to help improve land management, use of energy and resource-saving technologies, as well as reduce and recover waste.

The state-owned Ziraat Bankasi (Agriculture Bank) has launched a training programme for young farmers to teach them about best agricultural practices.

Smaller organisations are also helping, with some using innovative technology to help increase agricultural sustainability. The fair trade company Tarlamvar, for instance, has created an online platform brining small-scale farmers and consumers together by tracking the path of food from a farm to a person’s dining table.

“Not only are we helping famers to have a more marketable product and connecting them with customers, we’re also helping consumers to be more conscious about where their food comes from and how it is grown,” Ata Cengiz, Tarlamvar CEO, told local media in August.

However, while these initiatives have been welcomed by many groups, some environmental activists say the government needs to be doing more to combat some of the threats to sustainable agriculture.

Agricultural food production is dependent on biodiversity, providing protection for crops and helping reduce pests and disease, as well as affecting things such as soil fertility and pollination.

But at the same time research has shown that intensified farming has been associated with the loss of certain wild species.

Speaking to the Turkish news website hurriyetdailynews.com in May this year, Hikmet Ozturk of the Turkish Foundation for Combatting Soil Erosion, for Reforestation and the Protection of Natural Habitats (TEMA) warned that Turkey’s uniquely broad biodiversity was under threat.

Ozturk, like others, is also worried about climate change and the effect this will have on sustainable agriculture.

Current climate change models suggest that in the coming years the Mediterranean region will see more droughts and less rainfall. TEMA’s Ozturk has estimated that as much as 47 percent of Turkey’s land is at risk of desertification due to low rainfall.

“Geographical location, climate, topography and soil conditions, together with the country’s socio-economic interactions, increase sensitivity to climate change impacts, desertification and drought. The possible impacts of climate change in Turkey are expected to be severe, particularly on water resources, agriculture and food security, and ecosystem services,” said the FAO’s Selisik.

The Turkish government has said it is aware of the potential problems of climate change for farming and its National Agriculture Project aimed at ensuring food security through sustainable agricultural production involves projects for the conservation of natural resources.

It has also launched various incentives and projects for farmers to adapt to climate change, including training on implementing climate friendly agricultural practices such as preferring adaptive species, drip irrigation systems and direct sowing.

Despite apparent progress on promoting and adopting sustainable farming in Turkey, however, the challenges faced by farmers in transitioning to sustainable agriculture remain great.

“A lack of knowledge about climate friendly agricultural practices, farmer organisation and consultancy services are other barriers to a transformation towards more sustainable farms,” she added.