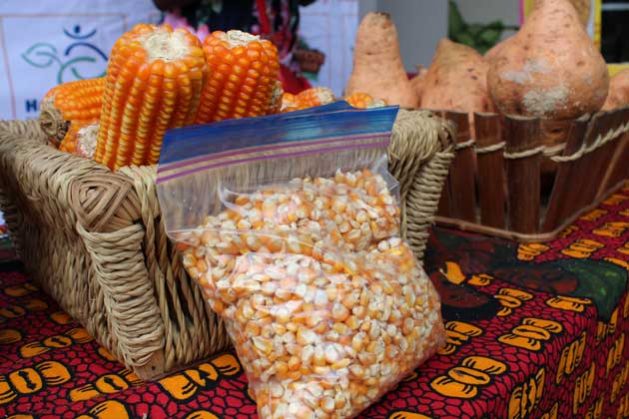 Vitamin A deficiency (VAD) leads to night blindness, illness and death from childhood infections. In Zimbabwe, 36 percent of children under five years of age suffer from Vitamin A deficiency, according to the World Health Organisation (WHO).

Identifying a business opportunity in agriculture, two youths, Clive Takudzwa Gahadza (28) and Tinashe Mbiriri (26), founded Sky Brands, specializing in the processing and distribution of biofortified products bought from smallholder farmers in Zimbabwe. The company sub-contracts farmers to grow Vitamin A orange maize and high iron and zinc beans, which they buy for processing and repackaging and resale. The company received a ZW$300 000 (USD1385) funding from the local youth bank, Empower Bank, to purchase harvest from farmers who are paid on delivery.

“After learning about biofortification from my friend, we together saw an opportunity to become pioneers of processing biofortified maize and beans into value-added products, not only in Zimbabwe but in the whole world,” Gahadza says. “We have improved on our production and increased the quantities we buy from the farmers and are now concentrating on the high iron zinc orange maize samp and mealie meal, rapoko (finger millet) and maputi (popcorn).”

In December 2019 the Barilla Center for Food and Nutrition will host the 10th International Forum on Food and Nutrition. In the spotlight the transformation towards sustainable agri-food systems and eating patterns, to benefit human health, economic growth, social well-being and the environment, of which biofortification is one potential solution. However, not everybody agrees that it is the panacea needed to address nutrition.

Zimbabwe has embraced the natural and cheaper technology of biofortification – a process of growing crops with increased content of micronutrients essential for development – in the hands of farmers to boost food security while beating malnutrition.

Vitamin A maize and iron beans which are high yielding, pest and disease resistant as well as drought-tolerant, making them ideal crops for farmers facing poor weather conditions.

Harvest plus says Vitamin A maize provides up to 50 percent of daily vitamin A needs while iron beans provide up to 80 percent of iron needs through consuming the high micronutrient food.

However, GRAIN, an international non-profit organization supporting small farmers and social movements in community-controlled and biodiversity-based food systems disagrees with that biofortified crops are the answer to solving micronutrient deficiency.

“In Africa, which is always portrayed as a hungry continent, biofortified crops are marketed as a magic bullet for addressing nutrient deficiencies … However, Africa has rich local food cultures informed by locally-specific social relations in which women often play a central role. The push for biofortification on the continent is therefore met with scepticism in many circles, said GRAIN in a 2019 report, Biofortified crops or biodiversity? The fight for genuine solutions to malnutrition looked at the current status of biofortification in Asia, Africa, and Latin America.

“Biofortification in Africa also overlooks the nutritious crops farmers are already growing,” GRAIN said. “For example in Malawi, as in other countries, there has been a push to market biofortified maize high in provitamin A. But these efforts have overlooked the existence of a popular local variety called mthikinya that is high not only in provitamin A but also in protein and lipids, requires little fertilizer, is early-maturing and stores well.”

Biofortification only addresses single treatment nutrient deficiencies, but malnutrition is a complex biological condition with many causes,” Phelps told IPS via electronic mail. “It can only be ameliorated with diverse, nutritious diets that are minimally refined. Hidden hunger is also a problem for malnourished and obese people eating highly refined, industrial junk food diets also based on a few nutrient-poor ingredients such as hamburgers and fries.”

“People had a balanced diet dependent on what seasonal food the environment provided where people were such as nuts, seeds, fruits, vegetables, meat, dairy, eggs and seafood from many other species around.”

Gahadza said his company is currently subcontracting four farmer group enterprises representing 150 farmers in Bindura, Mount Darwin and Rusape who this year aggregated 50 MT of grain this season, a fivefold increase from the 10 MT sourced in the 2017/2018 season.

“Next year we are looking at buying about 200 MT if all conditions are the same and this means working with 400 farmers,” Gahadza told IPS. “Empowering farmers means a lot to us as entrepreneurs because our business model is impacting the lives of about 500 families and our products have reached close to 11,000 households and we are making a contribution to nutritional security through the products.”

Adriel Karima, a farmer in Chegutu in central Zimbabwe, supplies Sky Brands with fortified sugar beans NUA 45 variety which he describes as a crop which also cooks faster than other beans.

“I grew one hectare at first and harvested about two tons and sold most of the harvest to Sky Brands and kept seed for an increased area of four (4) ha,” said Karima adding that, it was easy to switch to growing the iron rich bean variety because we were already into sugar bean production.

“It is always easy to switch to producing a crop with a ready market which is Sky Brands who require clean whole beans. It is our target to grow 10 ha of these beans and supply them with between 20 and 40 metric tons,” said Karima, who is one of 250,000 farmers growing and consuming vitamin A orange maize and iron rich beans in Zimbabwe currently.”

Malnutrition, a result of lacking essential micronutrients such as iodine, iron, zinc and vitamin A in the diet, is a growing health threat in Sub-Saharan Africa. The United Nation’s Food and Agriculture Organisation (FAO) estimates that 200 million Africans or 33 percent of the continent’s population are chronically malnourished.

The lack of vitamins and minerals which the World Health Organisation (WHO) describes as ‘hidden hunger’ occurs when the quality of food people eat does not meet their nutritional requirements for them to grow and develop. This leads to impaired growth, risk of stunting, blindness, anaemia and even death especially among children and women.

A 2017 UNICEF, World Bank and WHO report says, in Zimbabwe, the prevalence of stunting in children under five years of age was 26 per cent in 2018, an improvement from 34 per cent 8 years ago. It warned that this progress had been blunted by marked disparities among rural and urban areas and among rich and poor households.

“It remains, nonetheless, encouraging to note that Zimbabwe is one of the 60 countries that are leading a global movement to end malnutrition in all its forms by 2025,” said UNICEF.

Zimbabwe has been ranked 67.30 on food loss and waste and sustainable agriculture under the Barilla Food Sustainability Index but scored poorly on tackling nutritional challenges.

Harvest Plus Zimbabwe have been a technical partner for SkyBrands providing the biofortification technology. It has enabled the company in the standardization of the grain it buys from the farmers as well as identifying farmers growing the orange maize and iron beans, Gahadza said.

Harvest Plus Zimbabwe says it has supported the Department of Research and Specialist Services under the Ministry of Agriculture to breed, test, and release varieties of vitamin A maize and iron beans developed through its partnership with the International Maize and Wheat Improvement Center (CIMMYT) and the International Center for Tropical Agriculture (CIAT).

The Zimbabwe government launched a fortification strategy in November to respond to the growing micronutrient malnutrition rates in the country. Biofortification was incorporated as a food-based solution, and to date, more than 250,000 households have been reached with biofortified maize and bean seeds both directly and through market-led interventions, according to Harvest Plus Zimbabwe.

Gahadza said the company is planning to expand in the long run to partner with smallholder farmers and setting up agro-processing centers in Zimbabwe’s rural areas. This involves giving farmers technical and financial support to process raw materials in their areas then share on royalties.

“The ultimate goal for this is to provide affordable healthy foods at the least possible cost,” said Gahadza.