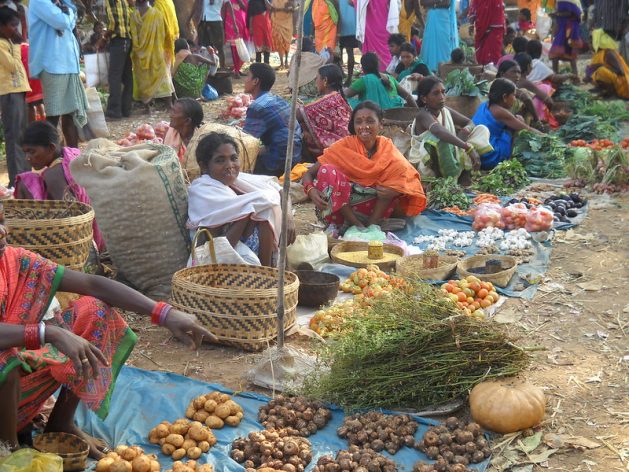 Tribal women converge at the Boipariguda weekly market in Koraput District, in India’s Odisha state, to sell and buy farm produce. Indigenous communities remain at the centre of those affected by climate change, he said, disproportionately bearing the brunt of the crisis and facing higher risks. Credit: Manipadma Jena/IPS

UNITED NATIONS, Jan 23 2020 (IPS) - More than 70 percent of the global population is currently living in parts of the world where income inequality has grown, according to a World Social Report 2020 launched by United Nations Department of Economic and Social Affairs (DESA).

The report, which was launched at the U.N. on Tuesday, identified four “megatrends” that impacts this inequality:  technological innovation, climate change, urbanisation and international migration.

“The report underscores that these mega trends can be harnessed for a more equitable and sustainable world or they can be left alone to divide us further,” Elliott Harris, U.N. Chief Economist and Assistant Secretary-General for Economic Development at DESA, said at the launch.

He added that the current climate crisis especially causes the slowdown in reducing inequality between countries and further “presents major obstacle to reduce poverty”.

Indigenous communities remain at the centre of those affected by climate change, he said, disproportionately bearing the brunt of the crisis and facing higher risks.

“And it’s affecting intergenerational inequality as well,” he said.

“Despite its immense promise, technological change creates winners and losers and its rapid pace brings additional new challenges,” he said.

According to the U.N. Committee for Development Policy (CDP) data from 2018, the list of least developed countries includes many countries in Africa — a continent being lauded for its massive technological growth.

As a PwC report on Africa states, “disruptive innovation is transforming Africa’s economic potential, creating new target markets and unprecedented consumer choice”. It then begs the question how technological divide is perpetuating inequality in these countries.

When asked, Harris acknowledged this growth but added those countries that are lagging behind have a lot of “catching up” to do.

“The fact remains that because of the rapid advancement of technological innovation, the time that its taking to establish a digital infrastructure is time at which the advanced countries continue to move ahead at increasingly rapid pace,” he told IPS.

“The cycles of tech innovation are getting shorter and shorter,” he said, adding a hypothetical analysis that by the time a developing country has set up 5G, a developed country is already establishing 8G.

“And we need to make a really concerted effort to catch up really quickly,” he said, “we need a big jump; we can’t go progressively at the speed at which we did it in the past.”

Another notable observation made in the report was how those who are poor and remain without access to education or healthcare remain at the core of the struggle.

“Disparities in health and education make it challenging for people to break out of the cycle of poverty, leading to the transmission of disadvantage from one generation to the next,” read a part of the report.

This is especially concerning at a time when the world has a massive refugee population that only continues to grow, whether due to climate change or conflict. The U.N. Refugee Agency (UNHCR) states the current refugee crisis is “unprecedented” with a total of 70.8 million people forcibly displaced.

For communities that remain in transit, it poses a challenge to establish access to health and education, which can thus hinder the process of breaking out the poverty cycle, thus perpetuating the gap between the poor and the rich.

When asked, Harris said this vicious cycle is “a very serious concern that we have.”

“The problem, of course, is [in] many cases the refugees are concentrated in places that do not have large amount of additional resources they can devote to support refugees and so they are very dependent on the support of the international community,” he told IPS.

“It’s been relatively less difficult to mobilise support at the onset of the crisis when people have to flee,” he said, adding that maintaining that support when in some cases they’re in refugee camps or displaced from their homelands for years at a time” is what becomes challenging.

He lauded the efforts by host countries for doing their best in hosting the refugees, and added that the international community has a responsibility to “step up and help these host countries.”

Marta Roig, Chief of Emerging Trends and Issues in the Development Section, Division for Inclusive Social Development, DESA, was also present at the launch.