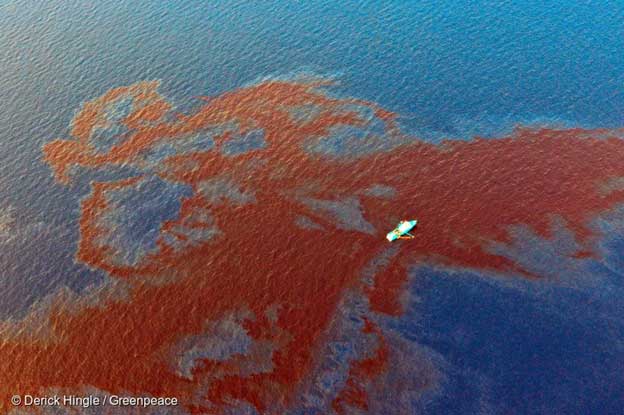 According to estimates by experts, pollution levels in the Persian Gulf are 47 times higher than the world’s average and are steadily increasing.

The 600-mile body of water that is also known as the Arabian Gulf currently has 34 oilfields with more than 800 wells. In addition, roughly 85% of the oil extracted in the Gulf countries is exported – 40% of the world export of crude oil and around 15% of the world’s total export of refined products come from the region – and more than half of all the oil is carried by ships.

It is estimated that approximately 25,000 tanker movements sail in and out of the Strait of Hormuz, the only sea passage that connects the Persian Gulf to the open sea. Accidental spilling is unavoidable and, on average, 100–160 thousand tons of oil and oil products end up in the Gulf every year.

In addition to spills from tankers, oil spills and fires that have been a consequence of military activities that have taken place in the region over the past few decades have also severely contaminated the Persian Gulf.

The world’s largest oil spill, for instance, occurred during the 1991 Gulf War and an estimated 8-11 million barrels were leaked in the Persian Gulf waters as a result.

In an attempt to prevent the UN coalition forces from landing on the beaches of Kuwait that the Iraqi military was occupying at the time, Iraqi troops released oil at the Persian Gulf.

At least eight oil tankers, a refinery, two terminals, and a tank field were dumped in the waters and for at least three months, oil continued to spill into the Gulf at a rate of up to 6,000 barrels a day.

“Some of the oil spilled deep into the sea, burrowing up to 40 cm in the sand and mudflats. It remains there to this day,” writes Nick Barber in coursework published for Stanford University in 2018. “This disaster does not just highlight the responsibilities humans have in managing oil wells, rigs, pipelines, and tankers, it demonstrates how carelessness with a non-renewable energy source and pollutant, purposeful or not, can have devastating long-term environmental impacts that cannot be undone.”

In 2017, ScanEx and the Institute of Oceanology of the Russian Academy of Sciences began conducting the pilot project on the satellite monitoring of the state of the water of the Persian Gulf.

The results of the research confirmed the severe levels of oil pollution in the gulf waters and the damage, some of it which have been irreversible, on its marine life.

“In addition to military-led pollution, other issues such as warming waters due to climate change and the increasing saline levels due to desalination efforts by countries in the Gulf area aggressively worsening marine productivity and habitats,” says George Stacey, an analyst working with Norvergence, an environmental advocacy NGO.

Oceans are heating at a higher rate than were previously predicted and the Persian Gulf, which is already a relatively warm body of water due to its location and its shallow basin, makes it particularly vulnerable to climate change.

Scientists at the Climate Change Forum at the seventh World Government Summit in Dubai explained that rising sea temperatures could wipe out a third of the gulf’s marine species by 2090.

The findings have also been confirmed by a study conducted a the University of British Columbia (UBC), that a combination of human activities was pushing at least 35 per cent of the fauna in the Gulf waters to extinction in the next 60 years.

“The ongoing damage on the marine and coastal environment is going to impact the marine productivity which will have serious impacts on the health and commerce of the region,” adds Stacey.

Researchers at UBC state that environmental loss will particularly carry a heavy economic impact on fishing industries. Fisheries of Bahrain, with a relatively large fishing industry, and Iran, with the highest catch and fewer employment alternatives due to sanctions, are pointed out to be particularly vulnerable.

“The sea is very important to all the countries in the region and preserving it should be a priority on an individual, national, and regional levels,” says Stacey.

“A lot of the damage done in the past few decades cannot be reversed completely but it is not too late to prioritize the sustainability of the marine ecosystems of the gulf waters right now because any damages to it will trickle down to impact the communities living on its coasts and reverse years of development and advancements.”