Yesterday, Jan. 26, India celebrated its Republic Day. But it was marked by scenes of farmers driving their tractors in convoy and marching to New Delhi's historic Red Fort. IPS senior correspondent STELLA PAUL unpacks the issues behind India's farmers' protests. 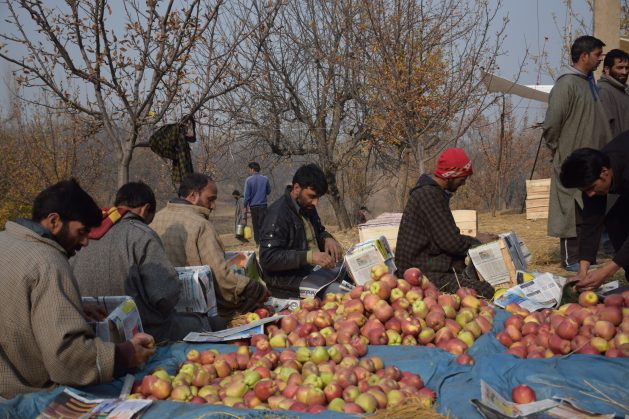 Apple farmers in Kashmir package their crops to send to a mandi or market yard. According to policy, wholesale transactions between farmers and traders must take place in a mandi, yet the market yards have become hubs of widespread corruption where a small group of sale agents have taken control. Credit: Stella Paul/IPS

HYDERABAD, Jan 27 2021 (IPS) - “This road is my home now and it will decide my future,” Sukhvinder Singh, a 27-year old farmer from the Moga district of Punjab, tells IPS. Last November, weeks after the government of India passed three farm bills he felt were anti-farmer, Singh travelled to Singhu, a village near Delhi, to demand the laws be repealed. Since then, he has been living in a tent he shares with five other fellow farmer-protesters.

On Sunday night the temperature dipped to 7°Celsius but Singh’s voice sounded warm and loud, betraying the cold. “Its like spending another night in the field, guarding my wheat crops,” he says.

There are currently an estimated 300,000 farmers protesting at Singhu, which has now turned into a tent city.

Though mobilised by 32 different groups, the farmers are unified in their demand: a total repeal of all three new laws:

The farmers’ protest on the edge of New Delhi started on Nov. 26, but this has been a movement years in the making.

According to food and farm experts, uncertain and erratic pricing, lack of access to the market, low returns, recurring losses and debt burdens have been part of an average farmer’s life across the country, including Punjab, for a very long time.

While a section of the experts think that the state must accept responsibility for the well-being of farmers and compensate them for their losses, the other section believes that the government should just embrace and promote a free market policy with minimal interventions and regulations over the agriculture market.

The government interventions have, till now, included Minimum Support Prices (MSPs) — a system where the states announced MSP for 22 crops before their sowing seasons. This also included the procurement of grains and pulses from farmers by the government to run its subsidised food distribution to the poor (PDS system), the regulation of wholesale trade with farmers, control of stocks with traders, and control of exports and imports.

However, the new farm policies have sided with the free-market policy advocates and adopted exactly the opposite of what farmers want: strict enforcement of the MSP and greater intervention by the government in the procurement and wholesale trade.

“Indian farmers have been protesting for years, but the country failed to take notice. For example, in recent years, we have seen milk farmers pouring pails of milk on the streets and vegetable farmers have crushed their fresh produce under bulldozers – all in a way to protest the volatile and erratic pricing that forced them to suffer huge losses,” Kavitha Kuruganti, a well-known activist and farm expert from Alliance for Sustainable and Holistic Agriculture or ASHA-Kisan Swaraj network, a national network of organisations working on food, farmers and freedom, tells IPS.

“But every time, the protest ended with a verbal assurance by the government or a piece of paper saying their grievances would be looked into,” says Kuruganti. 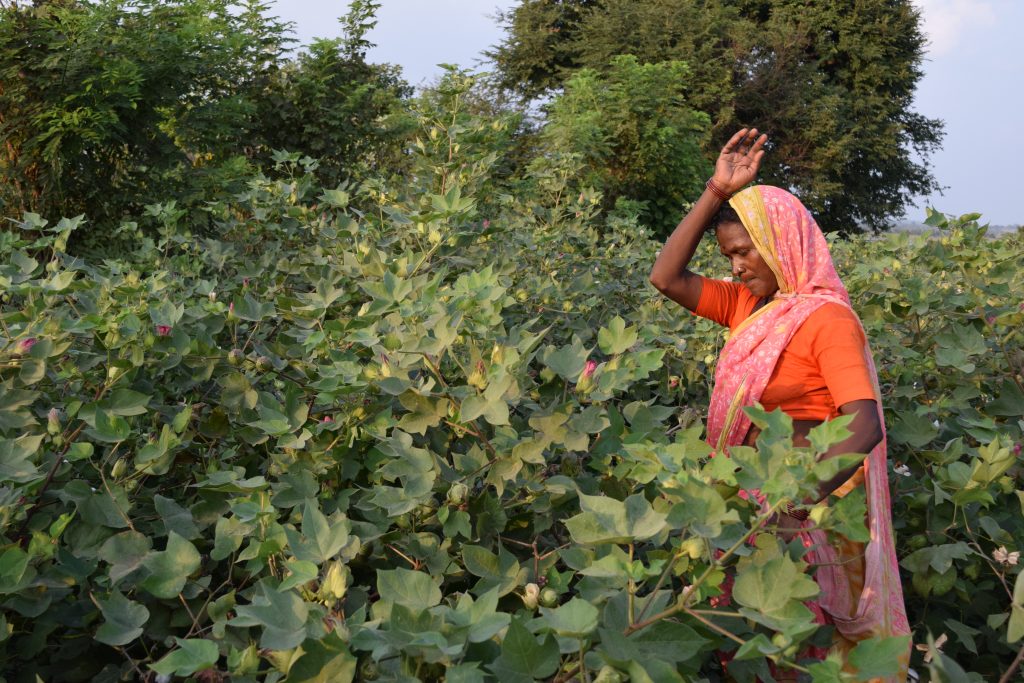 Sandhya Mohite, a marginal cotton farmer in Maharashtra state’s suicide-affected Yavatmal region. Cotton is one of the crops where Minimum Support Prices (MSPs) system has worked but now, according to the country’s new farm laws, farmers will be no longer guaranteed a minimum price on produce. Credit: Stella Paul/IPS

What farmers want vs what they are offered

In India, the wholesale purchase of produce from farmers is regulated by the Agricultural Produce Marketing Committee (APMC) Act 2003. According to the policy, wholesale transactions between farmers and traders must take place in a mandi — a designated market yard.The sale of produce under public scrutiny brought a level of protection from being cheated on weights and measures and price. There are hundreds of such mandis across the country, which are governed by an elected body of APMC authority.

However, over time, the market yards have become hubs of widespread corruption where a small group of sale agents have taken control and influenced APMC officials with their economic power and ties to major political parties. Unable to stand up to these price fixers, the farmers have had no option other than to play along and bear the losses.

The government acknowledges the cartelisation and, as a solution, is allowing alternate channels such as privately-managed market places which can compete with the regulated APMC mandis for the farmer’s produce.

In addition, farmers will be able to sell directly to consumers. Large buyers, such as firms engaged in food processing, large scale retail or exports can also bypass the wholesale markets altogether and buy directly from farmers.

These ideas were first recommended by the Swaminathan Commission – an experts’ committee tasked by the government in 2004 to finding solutions to problems faced by farmers.

However, the Swaminathan Commission also recommended a higher MSP and protective regulations for farmers while doing contract farming for large private traders. But the new laws do not include either of these recommendations.

The farmers now fear that since the MSP is no longer mandatory, they will be forced to accept any price large firms offer. Food crop growers also argue that they cannot even transport their produce to the nearest market yard without incurring losses. And they question how can they reach and sell at markets faraway.

In December 2020, even as their protests gathered steam, farmers across Punjab pulled down hundreds of mobile towers belonging to Reliance Jio Infocomm — India’s largest cellular service network. The protesters targeted the network after it was rumoured that large corporations like Reliance industries, along with Adani group, would be entering the contract farming business, potentially pushing independent farmers out of their livelihoods. After over 1,500 Jio telecom towers were damaged, the company finally approached the court and also clarified in a statement that it had no farm business plans. But the fear lingers.

Harmandeep Singh, a farmer from Tarn Tarn, Punjab tells IPS: “Today they are saying there are no plans. But tomorrow it may change. These companies are so rich, they can buy any amount of land and push us out of the business. Who will stop them?”

“In 2011, the then Congress Government had allowed 100 percent foreign investment in several sectors of agriculture, so the corporates have been there for a long time already. In fact, since we joined World Trade Organisation (WTO), opening up of the markets has become inevitable. However, there should be a balance and ways to support and protect the local, small farmers and for that the APMC should play a stronger role, not be done away with,” says Kannaiyan, who is also a member of the global small farmers movement La Via Campesina.

No takers for a 3rd party role

On Jan. 12, the Supreme Court of India formed  a 4-member committee to hold talks between the government and the farmers to resolve the protests over the farm laws. But the farmers were quick to reject the committee and refused to be part of it.

So far, there have been 11 rounds of dialogues which centre around not just ‘techno-legal’ issues but also on policy directions and policy implications — “areas where the Supreme Court has no role to play,” Kuruganti says, explaining why the farmers do not see any merit in joining the review committee.

“The problem today is, except for Punjab and Haryana, there is no large farmers union anywhere else in this country,” says Kannaiyan of SICCFM.

“This is why a movement of this magnitude can be led only by farmers from those states. But we stand by them strongly in solidarity.”

Yesterday, Jan. 26, India celebrated its Republic Day – the day the country’s constitution came into effect. The celebration usually includes a token display of the country’s military might by parading its nation’s defence weaponry.

But this week, the nation witnessed a different parade: a 100-km long tractor rally by the protester farmers. The government tried to prevent the rally by getting a court order and some of states also banned sale of fuel to tractors, but this failed to dissuade the farmers who were determined to carry out the rally. Many vowed to only return home after the 3 farm bills have been repealed.

There were skirmishes between police and a small number of protesters, but the majority of protesters were peaceful. Police reportedly dispersed the crowd with tear gas and one protester died after a tractor overturned and fell on him.

“The government is trying to show the world that it has done a great job by building weapons. Now we want to tell the world that a country that a country is not made great by making weapons but by respecting its farmers and by restoring its economic lifeline – the agriculture which is not happening right now,” Mandeep Kaur, a woman farmer with small land holding from  Punjab’s Ludhiana who has travelled to Singhu several times during the past two months to join the protests, tells IPS.

On Jan. 22, after the 11th round of discussions, the government offered to delay the implementation of the farm laws for 12 to 18 months – allowing farmers the additional time to prepare themselves for the future.  However, as the farmers refused to settle for anything less than a full repeal of the legislation, the government declined to announce dates for further discussions.

The impasse has failed to move the farmers from their stance, but some are asking the government to not make it a show of ego.

Meanwhile, farmers from several states including Maharashtra, Madhya Pradesh, Assam, Kerala and Telangana have lent their support to the protest movement.

And today, Jan. 27, a day after the Republic Day protest, Kuruganthi says “the protest movement will continue peacefully”.