The author is, Sierra Leone’s Ambassador Extraordinary to Switzerland and Permanent Representative to the UN and other International Organizations in Geneva.

GENEVA, Mar 9 2021 (IPS) - When on 15 February the chair of the World Trade Organization’s (WTO’s) General Council, Ambassador David Walker of New Zealand, announced that Dr. Ngozi Okonjo-Iweala would be the new Director-General, the mood among delegates was of relief.

Dr. Okonjo-Iweala commanded overwhelming support from the start of the selection process in July 2020, but her historic elevation—as the first African and the first woman to become Director-General of the 26-year-old trade organisation—was by no means certain only a few weeks prior.

“Without the recent swift action by the Biden-Harris administration to join the consensus of the membership on my candidacy,” the new Director-General said in her acceptance statement, delivered via video link, “we would not be here today.”

This plain statement of fact underlines the challenges she will likely face. It is also indicative of the paralyzing difficulties experienced by the world’s main trade arbiter in recent years, where key decisions are made by consensus among over 160 members.

So, what can Africa gain from an African Director-General of the world’s premier trade organization?

This question was never openly asked during the selection process, in part because as well as being an African and a woman, Dr. Okonjo-Iweala’s qualifications—Harvard-educated economist, top World Bank official, longest-serving Finance Minister of Nigeria (Africa’s largest economy), and Foreign Minister—towered above her rivals.

But the question will likely become a point of conversation during her tenure. 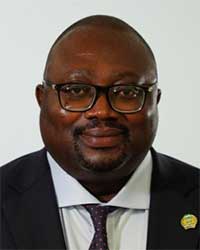 Some will try to use it as a benchmark for evaluating her performance in office. That will make no sense. For the past 20 years, no round of trade negotiations at the WTO has been successful.

The WTO’s dispute resolution mechanism—the Appellate Body—has been stymied, including through the blocking of all its new appointees by the previous US administration, a decision that should be rescinded.

But there are important areas where the Director-General, with her political clout and proven leadership skills as a reformer, can lead “from behind… to achieve results,” as Dr. Okonjo-Iweala herself noted in her acceptance statement.

In that statement, she highlighted as a top priority an inclusive and effective approach to COVID-19 vaccine distribution, which surely must include an agreement to suspend intellectual-property protection for vaccines and other vital drugs to enable their mass production and distribution in poor countries.

This is known as the TRIPS Waiver proposal, an initiative of India and South Africa that now has more than 50 co-sponsors.

Dr. Okonjo-Iweala, as chair of the vaccine alliance Gavi and one of the African Union special envoys for the continent’s response to the COVID-19 pandemic, has been consistently passionate about this issue and has called for the rejection of “vaccine nationalism and protectionism.”

In post-pandemic recovery, Africa will focus on operationalizing the African Continental Free Trade Area (AfCFTA), which is expected to connect some 1.2 billion people across 55 countries with a combined GDP of $3.4 trillion.

The trade pact will unify and amplify Africa’s voice in urging the WTO to create a vision that reflects the continent’s economic aspirations.

The AfCFTA itself signals a preference for a rules-based multilateralism, which aligns with the WTO’s ideals. Therefore, Dr. Okonjo-Iweala should actively cheerlead for the AfCFTA and canvass for necessary technical support for its successful implementation.

Perhaps more difficult but vital to African and other developing economies is improving market access for their agricultural products. This access is severely limited in part because of the huge distorting subsidies that wealthy nations provide their farmers.

There have been encouraging overtures from European countries and Australia to African diplomats to help mitigate this problem, but it will need the leadership of the WTO to give the initiative the momentum it needs.

Dr. Okonjo-Iweala, who has stressed that trade must be centred around people and focused on economic development and reducing global inequities, is singularly positioned to lead this effort.

Negotiations around fisheries, which have persisted for years at the WTO, are an equally urgent concern for Africa. To date, some members even refuse to agree on what constitutes ‘fish.’

Wealthier nations lavish subsidies on their fisheries sectors, leading to over-enhanced capacity, which enables their fishing boats to infringe upon the sovereign rights of poorer countries in Africa. African-caught fish, already limited as a result of such encroachment, stand little chance of gaining market access in wealthy countries.

During her rounds of meetings in Geneva before her selection, Dr. Okonjo-Iweala advanced an important concept that was widely praised by African diplomats – trade finance.

As someone who followed her during those weeks of intense consultations, I was struck by the fact that no other candidate spoke about this issue. Providing financial and technical support particularly to least developed economies to export agricultural and fisheries products to richer countries can advance both trade and development.

Negotiations on such support for the cotton sector within WTO have, like those relating to fisheries, generated positive statements of support but no real action yet. African members have recently raised the issue of a WTO Joint Action Plan to provide support for the development of cotton by-products in poor countries.

This should be uncontroversial; it is certainly less contentious than intellectual property rights, for example. It merits urgent support.

Its realization, in addition to actions on agriculture and fisheries, will be the kind of incremental progress that will help reduce poverty and boost global trade.

For many African countries, it will constitute the kind of reform that would make multilateral cooperation – and the great honour to the continent represented by the elevation of a highly distinguished African trailblazer – truly meaningful.