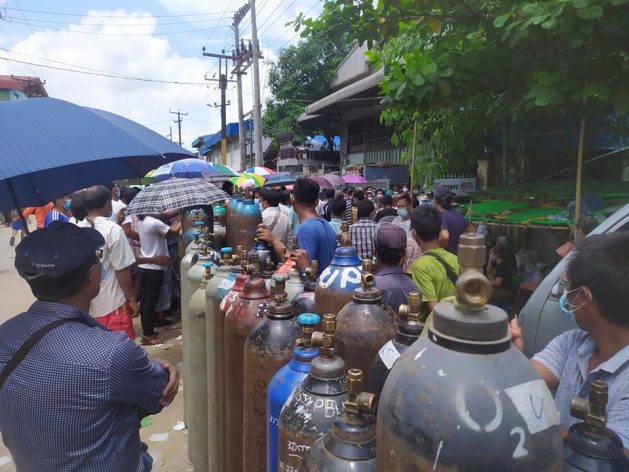 People in Yangon queue for oxygen cylinders to treat COVID patients as a third wave of the pandemic sweeps through Myanmar. Credit: Sai T

ROME, Jul 20 2021 (IPS) - The third wave of Covid-19 is sweeping through Myanmar, from the high narrow buildings of the commercial capital Yangon to bamboo houses in rural areas.

Ma Ni, not her real name, caught the virus in Yangon, infected by her husband and son. But no members of the family show up in the official numbers because they preferred to buy a home test instead of going to a hospital or a quarantine centre.

“It’s been seven days with COVID now,” 34-year-old Ma Ni says. “My husband needs oxygen, but we cannot get it … I hope God will save us.”

Ma Ni’s family is not alone. According to the military’s Ministry of Health, Myanmar recorded 3,461 new cases of COVID-19 and 82 deaths on July 11 alone.

In total, since the pandemic first struck, Myanmar has reported almost 4,000 deaths. Videos circulating on social networks show a dramatic increase in the number of bodies taken to Yangon’s crematorium.

The numbers, although certainly under-reported, are far lower than they were in Europe, the US or India, but they are growing. Moreover, the impact of COVID-19 has been compounded by the aftermath of the military coup on February 1 that ousted elected leader Aung San Suu Kyi and triggered nationwide protests, resulting in more than 900 deaths and thousands of prisoners, according to the Assistance Association for Political Prisoners, an NGO based in Thailand.

As a result, hundreds of panicking citizens are shying away from testing and quarantine facilities perceived as mismanaged by the unpopular military.

“I’d rather die than go to a military hospital,” Ko Moe, again not a real name, tells IPS. “I don’t trust them, and given my work as a volunteer ambulance driver, they might arrest me for helping the protestors.”

The military is trying to stop private initiatives, even shooting to disperse a crowd queuing to refill oxygen tanks. It is also forbidding producers to distribute oxygen to ineligible citizens, saying people are hoarding it unnecessarily.

Myanmar people think otherwise. Deep inside the country, in the city of Taunggyi, Shan State, a doctor interviewed by IPS says people are organising themselves autonomously to cope with the emergency because the health system has collapsed.

“As for now, things look still normal here but … many donors and well-wishers have set up a committee to install oxygen plants by themselves to help the people in the city and the small villages around Taunggyi,” she tells IPS.

Grievances are expressed all over social networks and emotional appeals for help from the international community or obituaries of loved ones who succumbed to the virus.

But it’s also the flu season, which many, feeling abandoned by the State or unable to afford private facilities, mistake for COVID.

“The situation is pretty chaotic. There have been many outbreaks of COVID but also of seasonal flu, in major cities and rural regions,” another doctor working for a private hospital in Yangon tells IPS on condition of anonymity. “People are frustrated for not getting efficient medical care from the authorities, while general hospitals cannot operate on a full scale since the majority of civil service doctors have joined the disobedience movement and there are only a few doctors and nurses left,” he says.

Indeed, only a small percentage of citizens have been vaccinated against the virus. The ongoing protests that started in February have crammed prisons with political prisoners, turning the repression into an epicentre of the outbreak.

Following a recent trip to Russia, junta leader General Min Aung Hlaing announced the purchase of 5 million doses of the Sputnik vaccine. However, it may be too little, too late to avoid an unprecedented health crisis in a country of over 54 million people only partly controlled by the military.

The international community is also accused of not helping, having been already stigmatised for failing to do anything to support Burmese citizens during the coup, beyond statements of condemnation.

The UN special rapporteur for Myanmar Tom Andrews told the Human Rights Commission on July 13 that the junta lacks the “capabilities and the legitimacy to bring this crisis under control”. And the lack of trust in the military makes this crisis “particularly lethal”, he said.

Activists from the opposition ‘Milk Tea Alliance Burma’ expressed the sentiment of the public in a Tweet: “Last year, the pandemic was contained successfully in Myanmar because of collective efforts of everyone. DASSK (Aung San Suu Kyi) was influencing the public well, holding campaigns to make cloth masks, the public followed the instructions well, they masked up and stayed at home without complaining.”

With the population mistrustful of the military and pro-democracy protests continuing, albeit on a much smaller scale, rules are often overlooked.

A Google app tracing people’s movements shows that the situation is back to the pre-coup situation in terms of traffic and crowds in the streets. Many shops may appear to be closed from the outside but are working at normal capacity behind. Masks are usually left at home.

The military has a history of resistance to international aid despite being unequipped to deal with an emergency, as happened in the disastrous aftermath of cyclone Nargis in 2008. The junta is unlikely to change its isolationist stance now, and international help may well be limited, according to a diplomat in Yangon, interviewed by IPS.

“COVID is not going to change anything for the junta, it’s taking people’s minds off the revolution, so it’s not such a bad thing for the military,” he says, asking not to be named for security reasons.