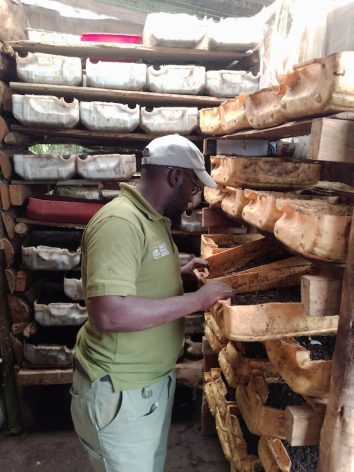 Abbey Lubega inside the larvae hatchery unit. Simple tools are used to harvest the larvae and frass. Credit: Wambi Michael/IPS

Kampala & Kayunga, Jul 19 2022 (IPS) - The conflict in Ukraine has led to an increase in fertiliser prices in Uganda and neighbouring Kenya. Amidst the shortages, some farmers are shifting to a more sustainable way of enriching their soils using frass from the Black Soldier Fly.

Before Russia invaded Ukraine, Marula Proteen Hub, based in Kayunga in central Uganda, mobilised farmers to produce Black Soldier Fly larvae (BSF). But many, especially the elderly, were hesitant.

“I wondered what they will think of me keeping maggots? Some, however, accepted. So, they have been keeping those maggots from which we make animal feed and now, quality fertiliser too,” said Abbey Lubega, the overseer of Marula Proteen Hub in Kangulumira sub-county.

About one thousand farmers in Kayunga have been mobilised to rear the maggots, which they sell to the hub either in cash or in exchange for organic fertiliser.

“Farmers have waste on their farms. So, we give them BSF systems for rearing the larvae. We also give them five-day-old larvae. The larvae eat through waste collected from homes. After eight days, they sell us the mature larvae or feed their livestock. There is also that option. Then they retain fertiliser for their garden,” said Lubega in an interview with IPS

“What the farmers are looking for, besides this income from the larvae, is the fertiliser produced on their farms. They can produce whatever quantities they want. It is quick, it is reliable,” explained Lubega

Marula Proteen Hub is situated below a pineapple and jackfruit processing plant to tap into the waste generated as feedstock for the larvae rearing. A pungent smell of ammonia fills the air as one enters the larvae hatchery section, where five-day-old larvae eat through waste.

“These larvae are eating. They are defecating. The ammonia that you are smelling is emanating from frass,” explained Lubega 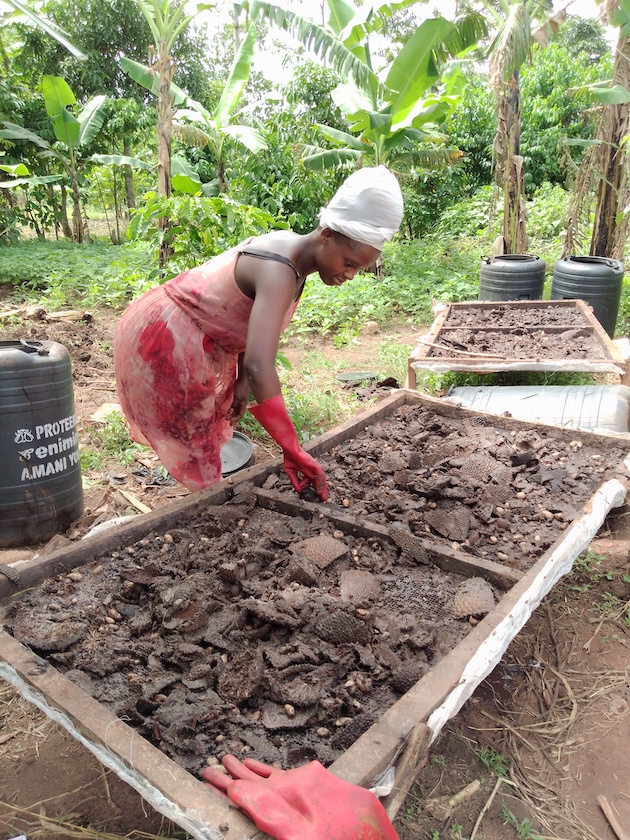 Harriet Nakayi lives in Namakandwa Parish, close to 75 kilometres east of Uganda’s capital Kampala. She is one of the women in this area trained to sustainably produce BSF larvae for animal proteins and frass fertiliser for their crops.

With her three-year-old daughter standing by, Nakayi scoops larvae from black containers and pours them onto a metallic net to separate them from the decomposed brown substances that look like loam soil. The larvae are about to be taken to the hub for sale. The frass and compost material are ready to be applied in her coffee, vanilla, and banana gardens.

She told IPS that frass from BSF is much easier to apply when compared with farmyard manure.

“This fertiliser does not burn the plants. So unlike manure which you have to wait for some time, you can take this one immediately to the garden,” said Nakayi

Like Nakayi, Solomon Timbiti Wagidoso, a pineapple farmer, said he applied BSF fertiliser to one of his gardens and that their growth seems to point to a better harvest.

“The government said it would manufacture our fertiliser, but I’m told that project is on a standstill. We now depend on imported fertiliser whose cost keeps on increasing,” said Timbiti

According to Timbiti, the price of fertiliser has increased since late 2020. The war in Ukraine now exacerbates the high prices.

By early April, fertiliser prices had more than doubled in Kenya, Uganda, and Tanzania. The three countries and the rest of East Africa depend on imports from Russia and Belarus.

Frass, a by-product of BSF rearing, has been found to contain substantial amounts of nutrients that can fertilise the soil. Lubega scoops frass from one of the containers with his hands. Tiny maggots are still crushing the waste that now looks like fine loam soil.

“It’s almost powder, as you can see. It is very fine,”  said Lubega. “Manure from cow dung is good, but that from goat manure is better. That from chicken is better than that of a goat. So how about the larvae that are the smallest. So, we see that the smaller the animal, the better the manure.”

Lubega explains to IPS that Black Soldier Fly larvae can break the substrates to make the nutrients available to the plant.

“And if you look at the cost-benefit analysis, why would I buy inorganic fertiliser if I’m going to need it all the time? It not different from teaching me how to fish and giving me fish,” added Lubega.

Rucci Tripathi, the global Practice Lead Resilient Livelihoods at international development charity VSO with an office in Uganda and several other countries, told IPS that there is a need for a strategy for farmers and developing countries to shield farmers from the current fertiliser, fuel and food prices crisis.

Tripathi said there was a need to invest in supporting community initiatives on the production of natural manure, including feeding the soils through having a crop cover such as hay and planting nitrogen-fixing plants.

“This reduces farmers’ dependence on imports of chemical fertilisers, which is good for farmers’ incomes and soil health. We see many such small-scale initiatives across Zimbabwe to Uganda to Kenya,” she said

Researchers at the International Centre of Insect Physiology and Ecology (Icipe) have revealed that adopting insect bioconversion technology can recycle between two and 18 million tonnes of waste into organic fertiliser worth approximately 9–85 million US dollars per year.

They observed that although the use of organic fertiliser is acceptable and affordable to farmers, there has been limited uptake in Sub-Saharan Africa due to poor quality, long production time, and limited sources of organic matter on the farm.

“Thus, there is a need to explore alternative sources of organic fertilisers that are readily available, affordable and of good quality, such as insect frass fertiliser,” they wrote.

Dr Debora Ruth Amulen, the founder of the Centre for Insect Research and Development, based in Kampala, told IPS that there is a need to sensitise farmers about the animal proteins and fertiliser generated from BSF.

“It is useful on our farms. It’s also a useful tool for our environment. We have a lot of manure from cattle and livestock. They are producing a lot of greenhouse gases. The Black Soldier fly has been found useful in compositing urban waste,” explained Amulen, also a lecturer at Makerere University

“It is a very simple technology that even those that have not gone to school can apply. And it’s very cost-effective.”