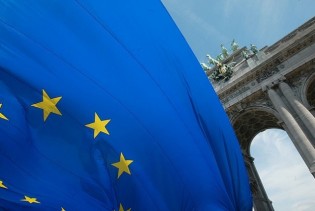 By Erik Larsson
It’s been called the most important election in decades. The coming elections to the European Parliament will take place in May, and some believe it will be a springboard for the parties on the far right. But what would the consequences of that be for the labour markets in the European Union’s member states?

By Erik Larsson
Eight years have passed since the Arab Spring. In many countries, the uprising was crushed, but in Tunisia democracy gained a foothold. Arbetet Global travelled to the small country town Side Bouzid to find out why.

By Erik Larsson
29 years ago, Han Dongfang survived the hail of bullets at Tiananmen Square. Now, he lives in Hong Kong and maps Chinese labour market strikes. Arbetet Global caught up with him at the ITUC World Congress in Copenhagen.

By Erik Larsson
There’s not one answer, no single solution, Stefan Löfven replies to a question about what the most important focus for the global labour market was.

By Erik Larsson
In a bus sits a man wearing a chequered shirt and cap. His age is difficult to determine. He could be 45, 55 or 65 years old; life treats us so differently.

Guest Workers Prop Up the Economy of Home Country

By Erik Larsson
NEPAL. A few chickens are running around the courtyard in front of the corrugated iron shack. The village has just awoken. A bus passes by below on the road that snakes around the mountain; it will be hours before another one passes.

Father of Palestine’s Icon: Everyone is Blaming my Daughter

By Erik Larsson
It is late morning. A clear blue sky. The quiet of the village is deceptive. Bassem Tamimi is the father of the teenage girl, Ahed Tamimi, who has become a symbol of Palestinian resistance to the Israeli occupation.

By Erik Larsson
Only a few millimeters of corrugated metal keeps us apart from the advancing dusk.

By Erik Larsson
In August last year armed forces from both sides pushed forward into the desert and into the no-go buffer zone that the UN had established.

A Thorn in the Side of the Regime

By Erik Larsson
”Too many things happened. The police called me to the station almost every day. My whole working day was spent defending myself. I had no time to write articles. Then came the attempted coup d’etat and my name was on a list kept by the national security service. I was forced to flee the country.”

By Erik Larsson
Swedish Prime Minister Stefan Löfven made a special effort to reach this global agreement between countries, unions and businesses. The bearing idea is that by initiating dialogue in society, salaries can be raised, business profits improved and political stability strengthened.

By Erik Larsson
You have to pay six million dollars in tax! That was the message given to the Cambodian Daily the same week that Prime Minister Hun Sen publicly attacked the newspaper.

By Erik Larsson
Working fulltime in their own homes, putting their health at risk with the chemicals they use, to make the shoes sold in the West. Indian women endure poor working conditions and earn just over 40 dollars per month.

By Erik Larsson
H&M has made promises to raise wage levels and increase worker influence in the garment factories of Cambodia.  The validity of these supposed ambitions is being criticized. ”What have they actually achieved? Nothing!”, says Sajsa Beslik, sustainibility banker at Swedish Nordea.

Breast Milk is Exported to the US

By Erik Larsson
In a shed made of boards and tarps, one-year old Nune is in deep sleep as his mother Check Srey-Toy gently rocks his hammock. Then she tells me that she sells her breast milk to the US.
ADVERTISEMENT ADVERTISEMENT