Stories written by Jillian Kestler-D'Amours
Originally from Montreal, Quebec, Jillian Kestler-D'Amours is an independent reporter and documentary filmmaker based in Jerusalem since May 2010. She is a regular contributor to Free Speech Radio News, The Electronic Intifada and Al Jazeera English, and her first documentary film, ‘Sumoud: The Struggle for al-Araqib’, will be released by the Alternative Information Centre in Fall 2011. | Web 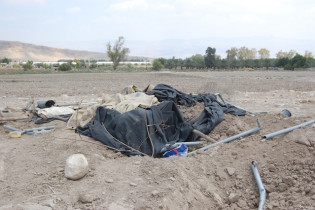 By Jillian Kestler-D'Amours
Tesfahiwet Medin holds a university degree and experience as a nurse. But six years after escaping the violent dictatorship in his native Eritrea, the 39-year-old says he feels like a part of him is missing, as he's been prevented from continuing in his profession in Israel.

By Jillian Kestler-D'Amours
Public discussions about sexuality and gender diversity are difficult to start in many places. But a new multimedia project that is garnering buzz in Palestine aims to reverse this trend and open up dialogue within Palestinian society around these historically taboo issues.

By Jillian Kestler-D'Amours
Public discussions about sexuality and gender diversity are difficult to start in many places. But a new multimedia project that is garnering buzz in Palestine aims to reverse this trend and open up dialogue within Palestinian society around these historically taboo issues.

By Jillian Kestler-D'Amours
A reddish-brown dome sits atop an ancient stone house, used hundreds of years ago for prayer. It peeks out from the surrounding trees as the rolling green valleys and hills of the central West Bank stretch out into the distance.

By Jillian Kestler-D'Amours
The release of over 1,000 Palestinian prisoners in late 2011 set off scenes of jubilation throughout the West Bank, Gaza Strip and Jerusalem, as families joyously welcomed their loved ones homes after months and years apart. But for many of these same families, an Israeli military order – that allows Israel to re-arrest released Palestinian prisoners based on secret evidence – has now shattered those happy reunions.

By Jillian Kestler-D'Amours
After Israeli war planes reportedly bombed targets in Syrian territory last week, individuals and groups in the Israeli-occupied Golan Heights are quietly preparing for the possibility of escalating violence between Syria and Israel.

By Jillian Kestler-D'Amours
As negotiations in Turkey’s efforts to join the European Union remain stalled, many worry that the Turkish government has little incentive to curb its ongoing crackdown on media freedoms and freedom of expression.

By Jillian Kestler-D'Amours
The Israeli army is systematically using crowd control weapons and live ammunition unlawfully against Palestinians in the West Bank, signaling a widespread breach of military regulations and an alarming culture of impunity, a leading Israeli human rights group has warned.

By Jillian Kestler-D'Amours
After over a year without accountability for a Turkish aerial bombing that killed 34 Kurdish men and boys, Turkey has come under heavy criticism for what many say is a widespread culture of impunity, especially when it comes to the treatment of its Kurdish citizens.

By Jillian Kestler-D'Amours
Every day, Anas Maraka sees his family’s home, but can’t go inside. “It’s hardest for my grandfather,” said Maraka, referring to the house overlooking Shuhada Street, once the central marketplace in Hebron’s old city.
Next Page »
ADVERTISEMENT ADVERTISEMENT