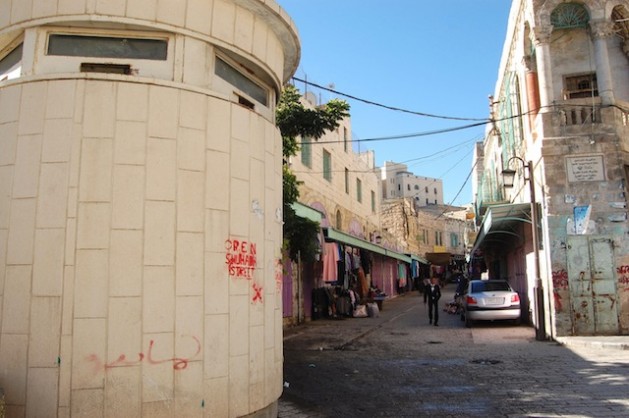 Rehabilitation efforts have allowed 10,000 Palestinians to return to the old city of Hebron. Credit: Jillian Kestler-D’Amours/IPS

While he never lived there himself, Maraka explained that being so close – and yet, so far – from his family’s ancestral home motivates him to maintain Palestinians’ presence in the largest, and one of the most tense and volatile, cities in the West Bank.

“I like the old city. It’s our culture. Our goal is to rehabilitate houses in the old city and bring people back to abandoned houses. We want to improve the quality of life,” explained Maraka, a member of the Hebron Rehabilitation Committee (HRC).

Maraka told IPS that in 15 years of work, HRC has refurbished approximately 900 houses in the old city of Hebron. This rehabilitation, he said, has allowed some 10,000 Palestinians to return to the area.

“After the Second Intifada, most people left their houses. They were afraid to go back because of the Israeli settlers and the Israeli military. They can’t live easily in the old city, but we’re trying to bring them back. We can’t leave this area because the settlers would come to take the houses,” Maraka said.

According to a 2006 survey conducted by the Israeli human rights group B’Tselem, over 1,000 Palestinian homes were abandoned and over 1,800 shops were closed in the centre of Hebron as a result of Israeli restrictions in the area. This represents about 42 percent of homes, and 77 percent of businesses, that were originally used by the city’s occupants.

Currently, about 500 Jewish-Israeli settlers live in five settlements in the heart of Hebron in an area known as H2; their presence there is protected by thousands of Israeli police and soldiers.

Some 15,000 to 20,000 Palestinians also live in the old city, where they face a myriad of movement restrictions and a near-constant threat of harassment and violence at the hands of Israeli soldiers and settlers.

Officials said al-Salaymeh threatened soldiers with a gun. The alleged weapon later turned out to be a toy. Violent clashes broke out between the Israeli military and Palestinian youth in the volatile neighbourhood after the killing.

“We want to keep Palestinians living in this area and to keep resisting. It’s an important place in all of the West Bank. It’s difficult still, but we’re trying to help as much as we can,” Maraka said.

Historic buildings have been refurbished and renovated throughout Palestine for decades. Today, entire villages and towns are being rehabilitated. These efforts are seen as a way to insist on the Palestinian character of the area and to maintain Palestine’s unique, cultural heritage, according to Palestinian architect and planner Iyad Issa.

“It’s part of our history, part of our identity,” said Issa, who works with ‘Riwaq’, a Ramallah-based centre for architectural conservation, adding that rehabilitating buildings provides people with a lasting “visual memory and a tangible cultural heritage.”

Issa told IPS that Riwaq has documented some 50,000 historic buildings in Palestine that need conservation. To date, about 100 buildings in 90 different Palestinian villages have been refurbished, while four villages in the West Bank are currently undergoing overall reconstruction.

“It is a creative way to use the space. It provides social (and) cultural infrastructure and creates new functions for the (local) community,” Issa said, explaining that architectural value and social impact are the two main criteria used to select a building for conservation.

The Palestinian town of Birzeit, just north of Ramallah, is an example of a community that has benefited from overall rehabilitation. The town counts some 200 historic buildings, including over 100 in the historic old city, with some dating back to the Mamluk era.

After the Birzeit University campus moved, leaving dozens of buildings unoccupied, rehabilitation reinvigorated social and economic development, and brought tourism back to the town.

Still, according to Issa, keeping the focus on smaller, more isolated Palestinian communities is crucial, as is making sure that local residents use the buildings for their own needs.

“People in villages are quite marginalised. This heritage belongs to the community and should be used by the community,” he said. “Renovation is a process to see what’s possible, to envision a better future.”