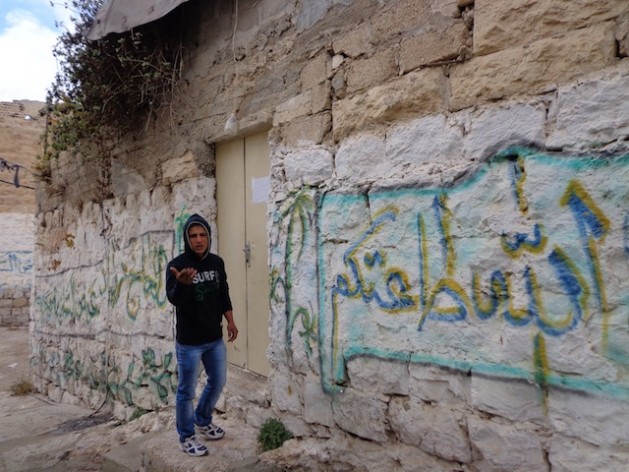 A family member expressing outrage outside the house of the slain Muhammed Salaymi (17). A notice on the door declares this to be the home of a martyr. Credit: Mel Frykberg/IPS

HEBRON, Occupied West Bank, Dec 19 2012 (IPS) - A new Palestinian group called the National Union Battalions (NUB), comprising Palestinians from across the political spectrum, has called for a third Palestinian uprising or Intifada. Simultaneously, Israeli intelligence is warning that conditions on the ground in the West Bank are ripe for another Palestinian revolt.

These warnings come as protests and clashes between Israeli soldiers and Palestinian youths broke out across cities and towns in the West Bank over the weekend, sparked by 17-year-old Muhammad Salayma’s untimely death at the hands of an Israeli border guard in Hebron.

A video distributed over the weekend by NUB members from Hamas, Fatah, Islamic Jihad and the Popular Front for the Liberation of Palestine (PFLP) announced the establishment of their organisation as a means of consolidating the struggle against Israel.

While the group stressed its support for the United Nation’s recognition of Palestine as a non-member observer state, it said it would fight to recover “all of Palestine – from the sea to the river”.

“This is the beginning of a third Palestinian Intifada, which is erupting from the heart of Hebron and will spread to all of Palestine,” according to the video.

The members further threatened to kidnap Israeli soldiers if the Israel Defence Forces (IDF) didn’t stop arresting Palestinians, adding that if Israel continued to kill Palestinians with impunity, the group would retaliate in kind.

The Battalions’ demands include removing all IDF checkpoints in the West Bank, the release of all Palestinian prisoners from Israeli jails, an Israeli withdrawal from all occupied Palestinian land, and the transfer of all tax revenues Israel has been withholding from the Palestinian Authority (PA) since the U.N. voted on upgrading the Palestinians’ status.

The NUB also demands the opening of all border crossings, and the supply of water and electricity to the besieged Gaza Strip.

The group released their statement on Friday, the day following the fatal shooting of Salayma, after Israeli soldiers claimed he had threatened them with a plastic gun. However, when IPS spoke to members of the Salayma family a very different picture emerged.

“I doubt Muhammad had any plastic gun. I believe the Israelis planted that gun near him in the aftermath of the shooting,” the dead youth’s uncle Muhammad Salayma Sr., a policeman with the PA, told IPS.

“It was his birthday and he had gone out to buy a celebratory birthday cake. To get to the shop he had to pass through an Israeli military checkpoint and then pass through it again when returning home. If he had a replica gun on him the x-ray machine would have detected this,” Salayma told IPS.

“He was a happy and intelligent student, and represented Palestine’s wrestling team in France. He was returning home with his birthday cake and we are meant to believe that he suddenly tried to overpower a group of heavily-armed and well trained Israeli soldiers with a plastic gun? He wouldn’t have been that stupid,” Nasim Salayma (22), a cousin of the late Muhammad Salayma, told IPS.

Israeli, Palestinian and international human rights organisations have documented numerous cases over the years where Palestinians were shot dead by Israeli soldiers under highly disputed circumstances.

What is undisputed, however, is the mass anger this latest killing has sparked – hundreds of Palestinian youths took to the streets in Hebron on Thursday to vent their anger against Israeli troops, throwing stones and burning tyres. Dozens were injured in the subsequent clashes, some seriously, by live ammunition, rubber bullets and teargas. The protests then spread to other West Bank towns and cities.

IPS witnessed further clashes in Hebron the following day as a large rally of Hamas supporters marked the 25th anniversary of the organisation’s establishment.

This was the first time in years that the PA has allowed Hamas rallies to take place in the West Bank; it follows recent steps towards rapprochement between Hamas and the PA-affiliated Fatah, Palestine’s two main political factions and, hitherto, staunch enemies.

The baby steps towards unity follow Hamas’ growing political strength in the wake of the most recent Gaza war, which united Palestinians from all factions.  Security forces from both sides have also drastically reduced the number of arrests of opposition members.

As a result, Hamas’ strength in the West Bank is growing. This, coupled with Israel’s forthcoming transfer of a number of Hamas prisoners from Gaza to the West Bank, will further consolidate the Islamist organisation’s presence here.

Also preparing the ground for another uprising against Israel’s occupation is the possible collapse or dissolution of the cash-strapped PA as Israel continues to withhold more than one hundred million Palestinian tax dollars.

The PA is a source of livelihood for several hundred thousand Palestinians and their dependents, leading experts to predict that mass unemployment, which will surely arise from the dissolution of the PA, will make Palestinians more desperate.

Israeli-Palestinian peace talks are frozen. Palestinian outrage has been aggravated by the increase in Israeli settler attacks and the continued expropriation of Palestinian land.  Furthermore, following growing international recognition, Palestinian dreams of statehood have been emboldened.

Meanwhile, the Shin Bet, Israel’s domestic intelligence agency, says widespread unrest in the area could foster the development of the kind of infrastructure that could potentially support a third Intifada, according to Israeli media reports.