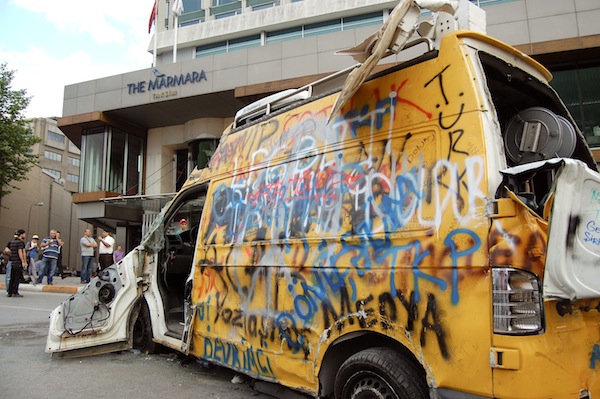 A smashed NTV satellite van in the centre of Taksim Square in Istanbul highlights protesters' frustration with how Turkish media has covered their movement. Credit: Jillian Kestler-D'Amours/IPS

ISTANBUL, Jun 7 2013 (IPS) - Sitting with hundreds of other protesters in the centre of Istanbul’s Gezi Park Thursday night, Arzu Marsh rummages through her backpack to show off what she calls her makeshift “emergency kit”: medical masks, a red spray-bottle filled with a liquid that lessens the effect of tear gas, a scarf and some food.

But perhaps the most important item is what’s sitting in her lap, and, every few seconds, lights up with incoming text messages: her cell phone.

“I’m from Ankara, so all my friends and all my family are from Ankara, and as soon as I put [photos and videos on] Facebook, everyone saw it, and of course they also shared,” Marsh explained, referring to images of recent anti-government protests in Istanbul.

“Now, we are all following…Facebook or Twitter. We are not following any [traditional] news,” she said.

As spontaneous chants of “Everywhere is Taksim! Everywhere is resistance!” spread through the crowd, and a banner reading “Keep resisting Ankara – we are with you” hung overhead, Marsh told IPS that sharing information on social media about protests across Turkey has not only helped keep activists motivated but also built solidarity across political and geographical divisions.

“Yesterday we heard that… there was a [protest] in Rize, so we had an applause for Rize. It was very emotional, and it motivates you,” she said.

A smashed, bright yellow, satellite TV truck, belonging to one of Turkey’s leading broadcasters, NTV, sits in the centre of Taksim Square. Its doors are ripped off, windows shattered and tires punctured.

It is also covered in graffiti and highlights protesters’ frustration with the mainstream media in Turkey.

At the height of police violence in Istanbul’s Gezi Park last week, most local television networks ignored the events and instead continued with their regular programming, including cooking and travel shows.

While these same stations are now reporting on the protests – and NTV issued an apology for its initial lack of coverage – activists say social media continues to fill an important void and is the primary source of information for many.

“There’s a new, young generation that does not trust mainstream media broadcasts and they seek information that is independent and objective,” explained Emrah Ucar, an Istanbul-based activist who founded a popular social media network, called “Ötekilerin Postasi”, or “The Other Post”.

Indeed, as demonstrations continue across the country against the government’s increasingly authoritarian controls, protesters have developed an elaborate – and often times, humorous and creative – social media network to organise and sustain their protest.

The “Ötekilerin Postasi” now gets 1.7 million clicks per day, Ucar said, and is reaching a more widespread and politically diverse segment of Turkish society than it ever did before.

“What’s most important about social media is making people feel that they are participating in the production of news. When they get this feeling, they make it an issue for themselves and they participate in the commenting and spreading of the news,” he told IPS.

Widespread arrests and detention of journalists, defamation lawsuits and government pressure on critical media outlets and columnists – including Prime Minister Recep Tayyip Erdogan’s publicly calling out journalists for their reporting – has had a “chilling effect” on the Turkish media, according to the Committee to Protect Journalists (CPJ).

Turkey jailed the highest number of journalists worldwide in 2012, often through the use of draconian and easily applied criminal laws. The government has also imposed fines on major media conglomerates, forcing them to sell off assets and downsize their operations, and helped facilitate the transfer of large news outlets to pro-AKP owners.

“We have seen changes in the editorial management of newspapers, firing of critical columnists, and a gradual but consistent shift away from commentary and news that are unpleasant or critical of the government,” Asli Aydıntasbas, a columnist at the daily Milliyet newspaper, told CPJ.

According to Selcan Kaynak, a political science professor at Istanbul’s Boğaziçi University, the media’s failure to promptly report on the Gezi Park protests reflects its overall refusal to report on issues that are critical of Turkey’s Justice and Development Party-led (AKP) government.

“It’s really, in one word, hegemony that is being established. There are some critical columnists, or independent newspapers, but they’ve been marginalised. There [have] been very strict controls [of what goes] reported and unreported,” Kaynak told IPS.

Still, the fact that there was a complete media blackout at the start of the recent protests in Istanbul was “shocking”, Kaynak said. “They thought, I guess, that by ignoring this, the rest of Turkey…would have no idea, and it would just go by and they would go on with the usual business.”

According to Aslı Tunç, head of the media and communications department at Istanbul Bilgi University, social media helped give a platform to opposition voices in Turkey that were growing online, even before the protests began.

“This didn’t happen overnight,” Tunç told IPS. “Those voices were there already. But the mainstream media did not cover [them], did not give them a voice on their televisions or [in their] newspapers, and they tried to marginalise [them].”

On Wednesday, 29 people were arrested – and later released without charge – in the city of Izmir for allegedly “inciting riots and conducting propaganda” after posting things about the protests on social media website Twitter.

In a speech last weekend, Erdogan himself called Twitter “a menace to society”. He also said “the best examples of lies can be found there”.

The defiant prime minister, who just returned from a diplomatic visit to North Africa and has refused to back down from his aggressive position against the demonstrations, has also called protesters deviants, extremists, and even looters – “çapulcu”, in Turkish.

In response, protesters quickly re-appropriated the word, and are now proudly calling themselves Çapulcu, using it in posters around Taksim Square, and in photos and updates shared online. Protesters even created a website, called ÇapulTV, where they are live streaming from Gezi Park, while an Anglicised version of the word – “chapulling” – has taken on the new meaning of fighting for your rights.

“[The protesters] proved that Twitter, social media, is a very powerful organisational tool,” Tunç said. “The young people especially proved that social media is part of media now. You cannot ignore the power of social media.”