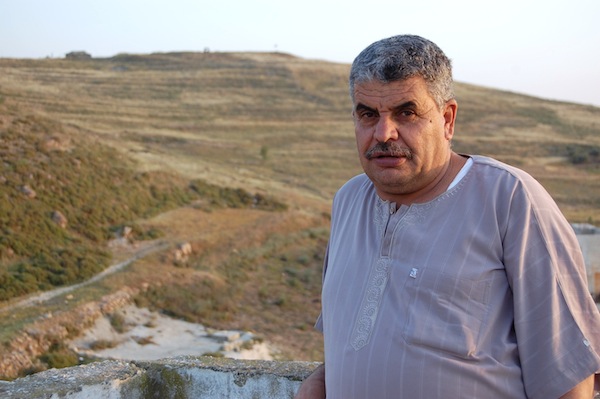 Ibrahim Makhlouf stands on the roof of his home in the West Bank, from where he can see the Israeli settlement outpost of Shalhevet Farm. Credit: Jillian Kestler-D'Amours/IPS

ASIRA AL-QIBLIYA, Occupied West Bank, May 16 2013 (IPS) - Ibrahim Makhlouf reaches for two wooden planks lying in the hallway and places them expertly in an L-shape along the seams of his front door.

“Open [the door],“ he beckons, knowing that doing so is nearly impossible. “Every night, we put this here,” he explains. “For the settlers.”

Makhlouf’s home sits on the outskirts of the West Bank village of Asira Al-Qibliya, only 500 metres from the illegal Israeli settlement outpost of Shalhevet Farm, an offshoot of the equally illegal settlement of Yitzhar.

Makhlouf told IPS that his house is attacked by Israeli settlers at least two times per week and has been vandalised over 100 times. The windows on Makhlouf’s two-story home all have bars on the outside to prevent them from shattering when settlers throw stones.

“When we see the settlers, we send the children to another house. What can we do?” Makhlouf, who lives with his wife and six children, said. “We’re afraid. There is no safety.”

"When we see the settlers, we send the children to another house."
-- Ibrahim Makhlouf

Since the Shalhevet Farm outpost was established in 1999, Makhlouf said he has been barred from accessing some 16 dunams of his family’s land, which was traditionally used to plant figs, grapes, olives and other trees, and from using a freshwater spring.

“It is my father and grandfather’s land, but now settlers are planting, and I can’t even enter it. They want to confiscate the land and houses and control the whole area to extend their settlements,” Makhlouf said.

“The [Israeli] government encourages them, with money and protection from the soldiers,” he added. “The government and the settlers are one.”

In recent weeks, international actors, including the United States, have renewed efforts to get Israel to freeze settlement construction in the West Bank in order to restart long-stalled peace talks with the Palestinians. On Apr. 30, the Arab League said it would support potential land swaps along the 1967 Green Line in negotiations of final borders between Israel and a future Palestinian state.

But the growth of Israeli settlement outposts in the West Bank, like Shalhevet Farm, has been almost entirely omitted from the conversation. Such outposts are often precursors to full-fledged settlements, both of which are illegal under international law. Article 49 of the Fourth Geneva Convention also forbids an occupying power from transferring its civilian population to the territory it occupies.

For Palestinians, both settlements and outposts have the same negative impact on their lives. But the Israeli government views only outposts, not settlements, as illegal, sometimes dismantling them for being built without the required permits and then relocating residents to nearby settlements.

Settlements are generally much larger than outposts and receive full services and infrastructure, although the Israeli government does also provide outposts, which generally begin as a few caravans on a hilltop, with basic services such as water and electricity. The Israeli army also protects outpost residents, as it does all other Israeli settlers.

Israeli settlement outposts were first built in the mid-1990s, during a freeze on settlement construction imposed by then-Israeli Prime Minister Yitzhak Rabin. A few years later, Israeli leader Ariel Sharon famously urged Israeli settlers to seize every hilltop. “Whatever you grab will be ours. What you don’t grab will not be ours,” he said.

In 2005, at the behest of the Israeli government, lawyer Talia Sasson reported that the outposts are illegal under Israeli law. To be considered legal, a settlement must be established by a government decision, be built on “state land”, possess a building plan, and have clear, territorial boundaries.

Outposts fail to meet these criteria, although earlier this week, the Israeli government announced plans to examine whether it could retroactively legalise four outposts.

Today about 100 Israeli settlement outposts dot the West Bank. While most begin small, they develop quickly, and many have cement houses, paved roads, playgrounds and daycare centres.

In the case of Shalhevet Farm, Peace Now, an Israeli non-governmental organisation that works against Israeli settlements in the West Bank, found that the Israeli Ministry of Housing and Construction spent 1.1 million Israeli shekels (over 300,000 U.S. dollars) to connect the outpost to basic infrastructure. The national water company, Mekorot, provides it with water.

According to Israeli human rights group Yesh Din, some outposts aim “to create Jewish continuity and connect isolated settlements with settlement blocs, in order to prevent future evacuation. Even though each of these outposts is home to only a few dozens of families, the outposts can completely control the land or the road around it.”

38-year-old Munir Jibreel Qaddous, a farmer from the West Bank village of Burin, told IPS about being viciously attacked by Israeli settlers in 2011, while the Israeli army and police looked on and did nothing.

White caravans of the settlement outpost of Bracha B, an extension of the Bracha settlement, overlook much of Burin’s farmland, and settlers regularly vandalise Palestinian property and attack their homes in the village, Qaddous explained.

Data collected by Yesh Din shows that between 2005-2012, over 91 percent of complaints filed by Palestinians against acts of Israeli settler violence were closed without an indictment. Of this, 84 percent were closed due to the Israeli police’s failure to properly investigate the crimes.

“All of them are the same,” said Qaddous, referring to Israeli settlers living in settlements and unauthorized outposts. He told IPS that he witnessed the Bracha B outpost’s construction and gradual expansion.

“In 1999, a watch-tower was put up, then trailers were erected. Then, there were 15 cement houses. Before the settlers came, they put [in] a road, electricity and water,” he said.

“This area is a very strategic area of the West Bank. After five or ten years, maybe you will see settlers on every hill.”