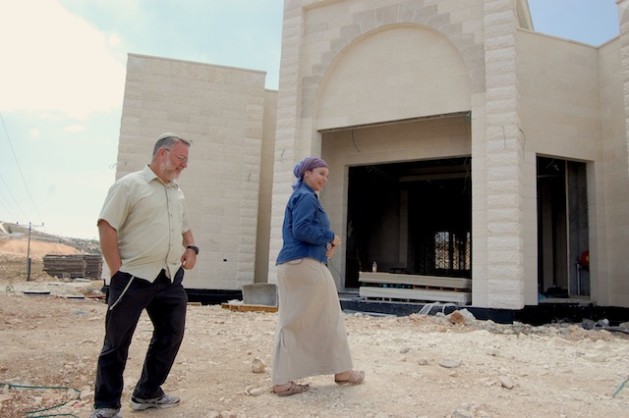 Moshe Goldshmidt and his wife Lea at a new synagogue under construction in the Israeli settlement Itamar in the West Bank. Credit: Jillian Kestler-D’Amours/IPS.

This is Har Bracha, an illegal Israeli settlement near Nablus, one of the West Bank’s largest Palestinian cities. And on a sunny day this July, construction was moving quickly.

“The bigger and bigger we get, the more difficult it will be to ever evacuate us,” said Yonatan Behar, a resident of Har Bracha, during a press tour of the settlement.

The importance of establishing these “facts on the ground” – which means rapidly building settlements in the West Bank and East Jerusalem – is not lost on the Israeli government.

“Itamar is continuing to grow throughout the decades. I call it a growth spurt and we haven’t stopped building.” -- Moshe Goldshmidt, resident of the ideological settlement Itamar near Nablus

As Israeli and Palestinian leaders resume negotiations Aug. 14 towards a peace agreement, Israel has untaken several steps to strengthen and expand its settlements. How this will impact the so-called peace talks does not seem to be a factor.

The Israeli government has also added several West Bank settlements to its list of so-called priority communities that are eligible for government funding. This includes three settlements that were originally considered outposts – built in violation even of Israeli law – that earned retroactive recognition last year.

Israeli army radio reported that the Israeli population in West Bank settlements grew more than the population inside Israel proper in the first half of 2013, with the settlement population growing by 2.1 percent, compared to just a two percent increase in Israel.

Housing start-ups in West Bank settlements also increased during the first quarter of 2013 by an astonishing 355 percent compared to the last quarter of 2012, according to data from the Israeli Central Bureau of Statistics.

These ongoing and seemingly accelerated efforts to expand Israeli settlements as negotiations re-start show that the Israeli government has no intention of uprooting its sprawling settler population, estimated to number more than 600,000 today.

Instead, Israel continues – as it has done since the settlements were first established decades ago – to flout international law by actively promoting settlement growth, with a complete disregard for the consequences – since there are, in fact, none.

While some have argued that recent promises to build in the settlements are meant to appease right-wing factions within the ruling Israeli coalition government that oppose a return to negotiations, the reality is that negotiations have, since their inception 20 years ago, only facilitated the continuation of Israeli colonial policies.

Indeed, so-called peace talks have historically served as nothing more than diplomatic cover for Israel as it continued to confiscate Palestinian land and expand its settler colonies.

The last major agreement signed between the two parties was the 1993 Oslo Accords. Meant to be only a five-year interim agreement, the Oslo framework is still in place.

Today, it is hard to view Oslo as anything more than a failure. Through Oslo, Israel entrenched its occupation policies, and increased its settler population exponentially.

Between 1993 and 2010, the Israeli settler population in the West Bank and East Jerusalem more than doubled, going from 241,000 to over 500,000, according to Israeli human rights group Btselem.

Many Israeli settlers are unperturbed by the return to negotiations or by the prospects of an agreement; after decades of impunity, many boast just how secure they feel.

“Itamar is continuing to grow throughout the decades. I call it a growth spurt and we haven’t stopped building,” Moshe Goldshmidt, resident of the ideological settlement Itamar near Nablus, told IPS.

Goldshmidt said he has been hearing about possible evacuation of the settlements for 20 years now, but efforts to get them to move only strengthen the settlers’ resolve to stay.

“We’re not going to live in fear,” he said. “We believe very strongly in what we’re doing.”