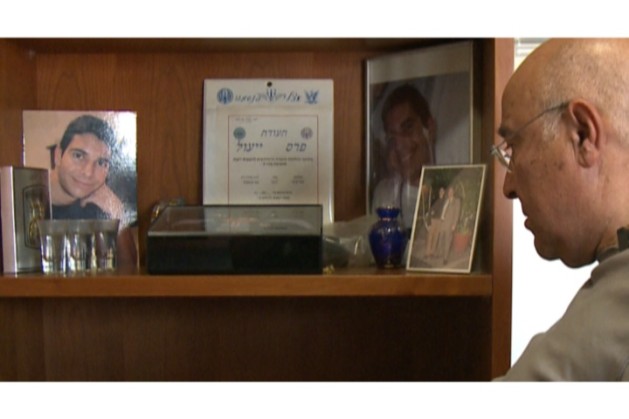 Tzion Swery at a makeshift memorial to his lost children. Courtesy: Pierre Klochendler

TEL AVIV, Aug 12 2013 (IPS) - Standing in front of the makeshift memorial corner of his deceased children that he arranged in the room , Tzion Swery says to himself, “How ironical that we mark the 12th anniversary of their death on Tuesday just as Israel starts releasing Palestinian prisoners.”

The Israeli government’s decision, starting Tuesday, to free 104 long-serving Palestinian and Palestinian-Israeli prisoners, whom it calls “terrorists” because they took part in attacks which killed Israelis, coincides with the resumption of peace talks, revived after a three-year hiatus.

The phased release of prisoners sentenced for life prior to the Oslo Accords of September 1993 was approved a fortnight ago, to the dismay of the victims’ families.

In the historic agreement signed 20 years ago by former prime minister Yitzhak Rabin and former Palestine Liberation Organisation chairman Yasser Arafat, both Israel and the PLO agreed to “recognise their mutual legitimate and political rights” and negotiate a two-state solution to their conflict. The accords never materialised into a final peace agreement.

“Only god can forgive. I won’t forgive the murderers of my son... Yet I’m ready to compromise, to reconcile, to open a new page.” -- Yitzhak Frankenthal, bereaved father of a soldier

The newly-resumed talks intend on finishing what the Oslo Accords started. Following the release of a first batch of 26 veteran prisoners, a second round of negotiations will begin on Wednesday in Jerusalem and in the West Bank town Jericho.

The rest of the 104 prisoners will be set free in three additional stages, conditional on progress made during the nine months allocated for the talks which officially began in Washington Jul. 30.

“We put our trust in the political and judicial systems that these murderers never see the light of day,” protests Swery. “Releasing them is as if they killed our children twice.”

Swery has been in mourning for the past 12 years. In August 2001, at the height of the second Palestinian Intifadah uprising, his son Doron, his daughter Sharon and his son-in-law Yaniv Ben-Shalom were killed in a drive-by shooting on an occupied West Bank road.

His granddaughters Shahar and Efrat, then three months and one year old, survived the attack. His daughter, their mother, protected them with her body. The perpetrators were caught and sentenced to consecutive life imprisonments.

The men convicted of killing his family are not listed for release.

Not all parents think as Swery does. “Arik was 19 years old, a lovely boy who smiled all the time,” said Yitzhak Frankenthal, bereaved father of a soldier.

Arik Frankenthal was kidnapped and killed by Hamas militants while hitchhiking his way home from his base in July 1994.

Nineteen years on, still coping with the loss of his son, Frankenthal leads an organisation of Israeli and Palestinian bereaved parents determined to work together for the sake of reconciliation, tolerance and peace.

“We need to overcome the psychological barriers of fear, hatred, mistrust, ignorance, and to push both governments to make peace,” he says.

“If the same people who sent these prisoners against Israel now talk with Israel, the prisoners shouldn’t continue to be in jail,” former Palestinian peace negotiator Ziad Abu Zayyad tells IPS.

According to the Israeli human rights organisation B’Tselem, more than 6,000 Palestinians are currently in Israeli jails. They represent one of the most painful issues of the conflict, not only for Israelis.

“Each prisoner has also a family, a community, and many people are involved emotionally,” Abu Zayyad points out.

For the Palestinians, they are “freedom fighters” resisting the Israeli occupation – for them, the worst form of terror. Their release is a long-standing demand.

“This cycle of bloodshed must stop. Releasing prisoners gives a signal to the Palestinian people that the Israeli government is serious, and thus helps create a better climate for the negotiations,” stresses Abu Zayyad.

The issue pits not just Palestinians against Israelis but Israeli families against one another.

“If releasing murderers is a condition for peace, then this isn’t peace at all,” objects Swery.

“I lost Arik precisely because there’s no peace between us and the Palestinians,” says Frankenthal.

“Unfortunately, the only language that we Israelis understand is the language of force, of power,” Frankenthal adds. “If there’s no terror, no need to talk with the Palestinians; if there’s terror, why want to talk. It’s a catch 22 situation.”

Frankenthal points at the powerful solidarity campaign organised by segments of Israel’s civil society for the release of soldier Gilad Shalit who was abducted in 2006 by the Islamist resistance movement Hamas.

After more than five years in captivity, Shalit was exchanged for more than 1,000 prisoners.

“Palestinians who fight soldiers are real soldiers. Releasing them is legitimate,” acknowledges Swery, “Just like when armies exchange prisoners. But these particular prisoners are murderers.”

The prisoners who will be released in four batches starting Tuesday took part in attacks that killed Israelis prior to the Oslo Accords in 1993.

“What’s the difference between a Palestinian fighter – in our point of view a terrorist – who puts a bomb in a cafe and kills 10-15 people, and an Israeli pilot who bombs Gaza City and kills 10-15 Palestinians?” retorts Frankenthal.

Whether they are “terrorists with blood on their hands” or “freedom fighters” or both, Palestinian prisoners conjure up all the elemental emotions which Israelis and Palestinians grapple with in their inextricable conflict – fear and blame, hatred and revenge, crime and punishment, loss and grief.

Whether terror is inflicted by Palestinians or by the Israeli occupation, neither side can forgive or forget – even the most committed peace lovers.

“Only god can forgive,” says Frankenthal in a murmur. “I won’t forgive the murderers of my son. They’d bring my son back, I’d forgive them. Yet I’m ready to compromise, to reconcile, to open a new page.”